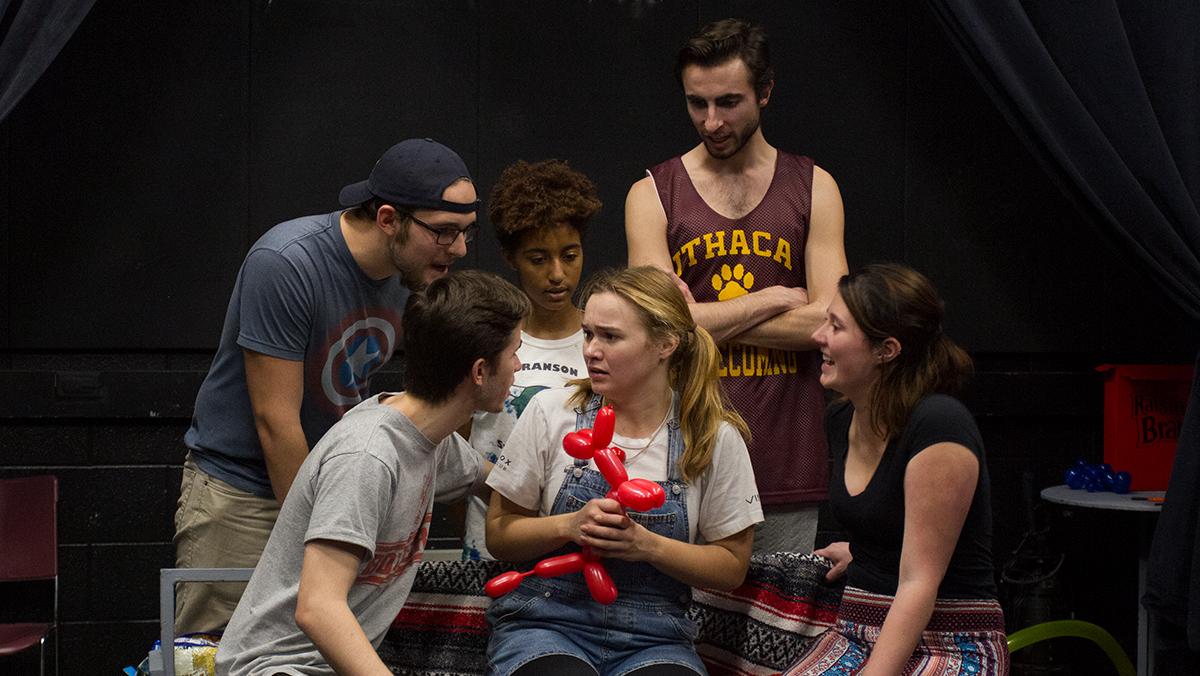 Connor Lange/The Ithacan
The cast of "Aliens with Extraordinary Skills" yells at Nadia, one of the main characters, who is played by senior Kalyn Altmeyer, during a rehearsal Oct. 31. The show will run from Nov. 4 to 12 in the Dillingham Center.
By Colin Barrett — Staff Writer
Published: November 2, 2016

Two immigrant clowns who come from the “unhappiest country in the world” — Moldova — move to New York City using fake visas to fulfill their American dream. Their fate is the subject of a critically acclaimed play, “Aliens with Extraordinary Skills,” which will be performed at Ithaca College from Nov. 4 to 12 in the Earl McCarroll Studio in Dillingham Center.

The main focus of the story is the exploration of what it means to call a place a home and how everyone in this world is an alien in search of love. Award-winning Romanian playwright Saviana Condeescu, assistant professor in the theater arts department, wrote a dark comedy about the hardships of being an immigrant.

“It is about Americans or any other people who come to New York City to fulfill their American dream but sometimes get dragged into an American nightmare,” she said.

Condeescu said the story is based on events that occurred in 2006 in Orlando, Florida. For 10 years, 872 Romanian, Russian, Ukrainian and Bulgarian undocumented immigrants were part of a circus in Orlando, where they avoided being caught. She said she was inspired not only by this story, but also by her earlier work, “Myth America,” another piece about immigration performed at LaGuardia Performing Arts Center and The Barrow Group in New York City. This play has been performed in cities throughout the United States, Australia and in Mexico, and in multiple off-Broadway venues, including at the Julia Miles Theater. With this specific performance of “Aliens with Extraordinary Skills,” Condeescu said she hopes the audience at the college will learn more about issues of immigration.

“Like George Bernard Shaw said, ‘If you are going to tell people the truth, you better make them laugh, or they will kill you,’” she said. “I’m trying to tackle hard subjects with a little bit of humor so they land in people’s minds and hearts.”

Condeescu has directed plays at the college in the past, such as “The Others” with sophomore Jharrel Jerome — who is also in the upcoming film “Moonlight” — but for this performance, Condeescu will not take on the role of director. Rather,  Dean Robinson, assistant professor in the theater arts department, will be making his directorial debut here at the college.

Robinson has worked with Condeescu on multiple productions, including a play by Condeescu titled “Lenin’s Shoe,” which Robinson performed in.

Robinson said he wants the play to have the absurdity of a circus performance — which is evident through his use of clowns as the main characters, Nadia and Borat — while also focusing on the strong themes of the story.

Senior Kalyn Altmeyer, who plays the role of Nadia, said she was attracted to the humanization of immigrants, who have been vilified by today’s society. She said she was drawn to the way Nadia’s resilience and power prevented her from giving up on her dream.

Election Day also falls right in the middle of the play’s run, and with issues of immigration prominent in discussions, she said, the timing works well.

Altmeyer said this play is a human story about people trying to make it through the day, and though these characters are in extraordinary circumstances, people can relate deeply to the them.

“I think that many times, these people, immigrants and nonimmigrants, are just statistics, numbers, and here we have some lives with some stories of love, fear, and friendship,” Condeescu said. “I think it’s really important to zoom in to get to know these people.”

Tickets for the event are free and can be reserved here.