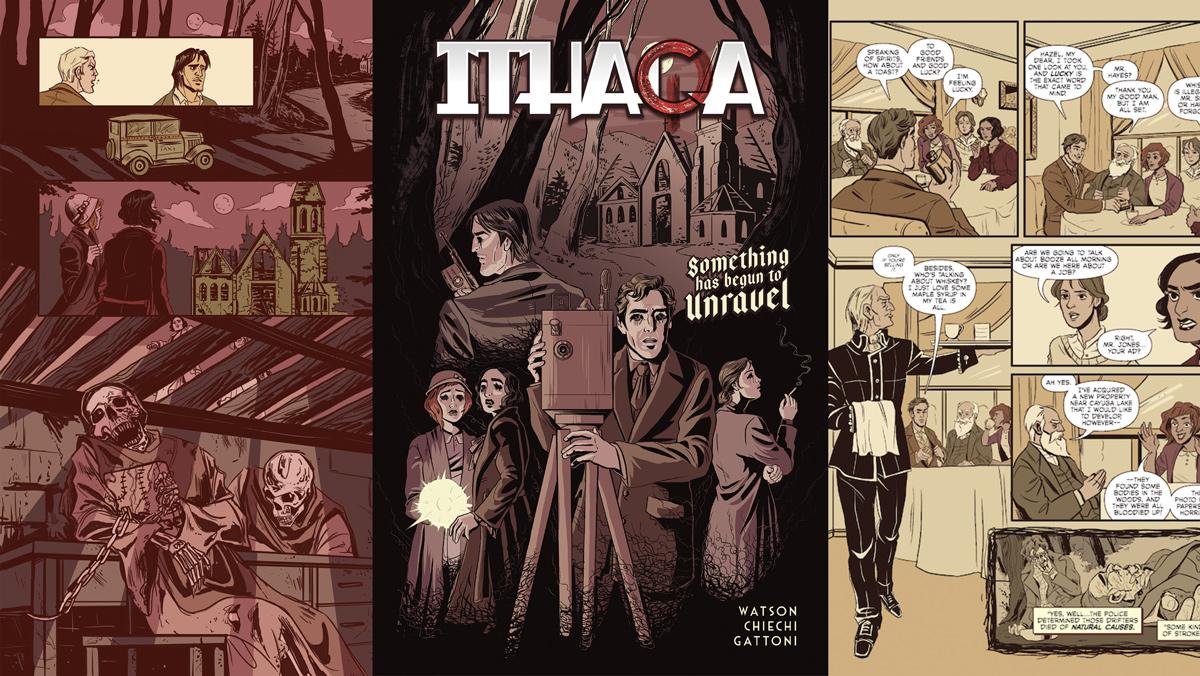 “Ithaqa” is a 1920s Lovecraftian-horror comic book series written by Michael Watson ’13 and illustrated by cartoonist Theresa Chiechi. The adventure series takes place in Ithaca, the home of the comic’s main character, Mookie Smitts, and his band of misfits. As they weave through the city’s underground speakeasies and the Wharton Studio Museum silent film studio, Smitts and company discover a plot to destroy the space–time continuum.

Watson was a cinema and photography major with a concentration in cinema production at Ithaca College. The first seeds of an idea for a comic started his senior year of college, he said. He was first influenced by the Golden Doorknob Film Contest, an annual competition open to students in the Roy H. Park School of Communications. The films in the contest are two minutes long or shorter, and a character in the film must somehow face death after encountering a doorknob. Watson said he wanted to take the strangeness of the Golden Doorknob’s prompt and apply it to his comic, creating something that was interesting and original.

The idea for the comic really solidified after he had a disturbing nightmare, Watson said. In his dream, Watson walked around his house and noticed black strings emerging from random items or rooms, like a carpet and his stove. He followed the strings to a neighboring woods, where he said he encountered a pile of matted, disgusting black strings that, just by looking at it, he knew represented something sinister.

“I woke up, and I was like, ‘Oh man, I got to write that down,’” he said. “The idea of something so innocuous in the corner of your eye … leading to something horrifying really struck me.”

From there, approximately one year later, Watson developed his ideas around the multiverse theory, which posits that there are multiple universes that comprise all space, matter, time and energy. In turn, the idea for the comic became a multiverse-themed horror rather than “The Blair Witch Project”–style horror he said he first envisioned.

Watson used a Kickstarter campaign to fund the comic. The Kickstarter is still running today and looking for donations, Watson said. He said he made it a point to raise enough money so he could pay his collaborators for their work. He saved his money slowly for what was, at the time, an untitled, unknown project, he said.

“From day one, I knew that I was going to pay everyone involved first before me and to the best of my ability,” Watson said. “I figured that no one was ever going to … let me just jump on a project. If I wanted to do something like that, I was going to have to put away money a little bit at a time, paycheck by paycheck.”

Watson was originally scheduled to be on a Finger Lakes region tour for the comic from March 20 to March 28. The tour will now be conducted digitally, the result of the widespread coronavirus that recently caused the college to cancel major events like Ithacon, which Watson was set to attend. The first issue of the series will still be sold at Buffalo Street Books and online.

Instead, Watson will conduct livestream Q&As and release exclusive art and animations online. Watson said via email that he also hired actors who are currently out of work because of COVID-19 to perform a theatrical reading of “Ithaqa” Issue 2, the second of 12 issues that Watson has planned for the series. Currently, the first two issues of the comic have been funded by the kickstarter. These digital-only live performances will take place from March 31 to April 4.

“Our team vowed that we would find a way to create a digital alternative to a physical book tour,” Watson said via email. “Our plan is to bring fans into the casting, rehearsing and directing process.”

Getting the comic published was a group effort. Lisa VillaMil ’13 met Watson in the English classes they shared at the college. Approximately two years ago, Watson hired VillaMil to edit the comic for grammar as well as review the story itself. She sewed up plot holes and suggested new story elements from the foundation Watson set.

“It requires a lot of rereading, especially for something that’s so big, so you don’t miss anything,” VillaMil said. “But also you want to try and maintain the writer’s voice because … it’s Michael’s story. I’m just helping him craft the best story he can craft.”

For both Watson and VillaMil, the comic included countless drafts and rewrites of the original script, which was approximately 700 pages long. Approximately a year and a half ago, a representative from a publishing company in London suggested Watson and VillaMil rework the story entirely, yielding its current version.

Also assisting the comic’s production is Lucas Gattoni, the comic’s logo designer, and the comic’s artist, Theresa Chiechi, both of whom responded to ads Watson posted on DeviantArt.

Gattoni said via email that for the logo, Watson wanted to hijack the letter “C” in Ithaca and layer a “Q” over it for dramatic effect. After a few rough sketches and research into movie titles from the 1920s, Gattoni and Watson decided on an art deco version — the base for Ithaqa’s current logo.

“I did over thirty different Qs, both with ink on paper and with a digital drawing software on a tablet,” he said via email. “By then the cover was already finished, so we used it to add the rest of the design elements and after four revisions we settled on the final logo!”

Beyond the logo, Gattoni designed the comic’s balloons, text, captions, sound effects and back matter pages like the introduction page.

After responding to the ad, Chiechi asked for reference photos to shape her sample sketches around. She said this allowed her to get a sense of the style, landscape and architecture Watson was looking for. A restricted palette of earthy or cool colors allowed her to explore the story’s changing seasons, Chiechi said.

Watson said that taking the comic through baby steps has been a painstaking process, but taking stock of how much has changed since he began the process helps. The project is still developing.

“It’s amazing that I want to be a writer, and here I am going on a book tour,” he said. “This is the dream, right? And yet, it almost feels like … you can smash it at any moment because it’s been such a slow build for such a long time.”