Anglers Club casts its line for fish and IC students 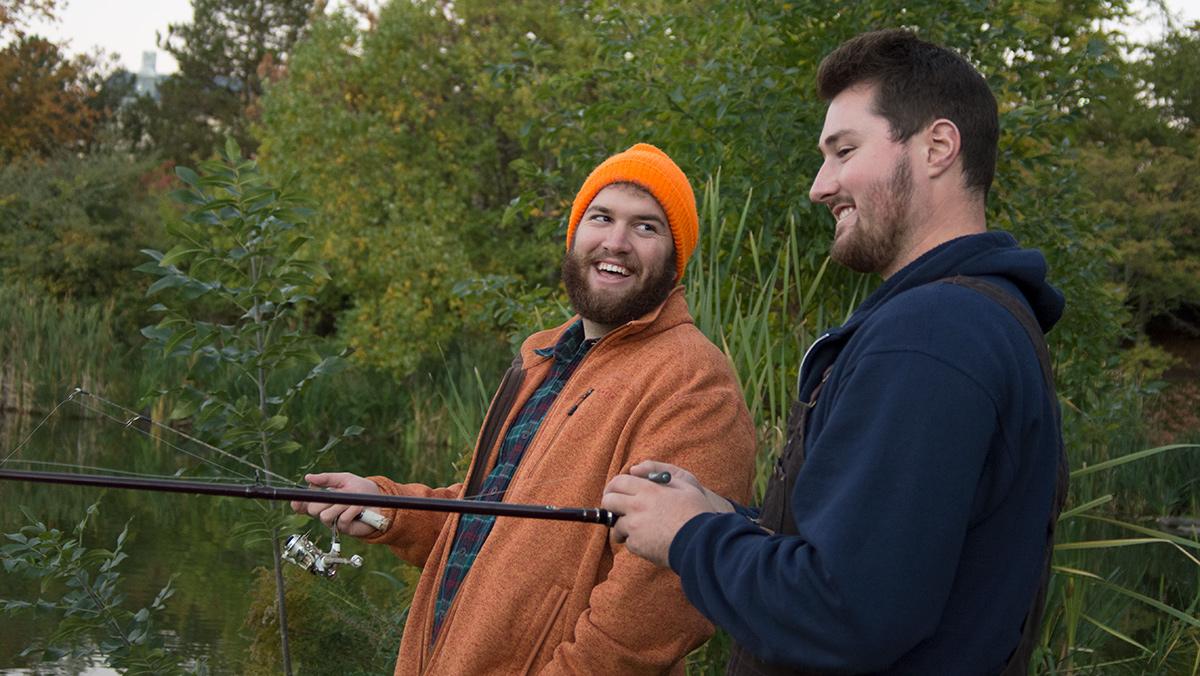 Teddy Zerivitz/The Ithacan
From left, senior Cole Handerhan, co-founder and vice president of the Anglers Club, and senior Kurt Hoefig laugh while catching fish on the pond next to Muller Chapel on Oct. 10.
By Silas White — Staff Writer
Published: October 19, 2016

The water is still for a moment before the line suddenly dips down and movement can be seen rippling from below the surface. Senior Cole Handerhan reels in a catfish, which weighs roughly 3 to 4 pounds and is about 20 inches long. The excitement of reeling in the fish has brought other members of the Ithaca Angling Club over, and they congratulate Handerhan before the fish is thrown back into the pond next to Muller Chapel.

Handerhan is the club’s co-founder and current vice president. He created the club in Spring 2014, alongside Briana Gagnier, a former Ithaca College student, who transferred to the University of South Florida before the beginning of the Fall 2014 semester, to bring together students who have a passion for fishing.

“I knew there had to be other people on campus who liked it, but there really wasn’t an avenue for us to meet up or come together,” Handerhan said.

Besides fishing at the pond by Muller Chapel, the club also takes a fishing trip to Lake Ontario during the spring semester every year. Senior Kurt Hoefig, who has earned the title “Bass Master Extraordinaire” due to his overt passion for fishing, said fishing on Lake Ontario is incredible, regardless of if you enjoy fishing or not.

“We essentially rent two charter boats that are about 25 feet long. When you’re out there, it doesn’t feel like a pond. It feels like you’re out on the ocean,” he said. “It’s an incredible opportunity, even if you don’t like fishing, just to see that — it’s unbelievable.”

Besides fishing on Lake Ontario and the pond by Muller Chapel, Ripic said, the group fishes on Second Dam, Cayuga Lake and the local tributaries. In the winter, the group ice fishes on local ponds and reservoirs where the ice is safe.

Hoefig works in the fishing department at the specialty store chain, Field & Stream, in Elmira, New York, which is a 40-minute drive from Ithaca. By his own estimate, he said he owns 50 rods, about 20 of which he brings to the college and lends to those in the group without their own equipment.

Handerhan’s interest in fishing developed at an early age and was partly influenced by his uncle, who also fished. Two summers ago, he worked as a fishing guide at a fly-in lodge, a fishing resort typically accessed by plane, in Alaska.

“I spent a whole summer off the grid, there were no roads, and the only way to get there was a float plane that landed on the river,” he said. “It was a really cool experience fishing for all five species of pacific salmon and rainbow trout. Some of the best fishing in the world is in Alaska.”

Hoefig said the club “trolls” for brown trout, a technique where multiple baited lines are cast out at the same time. He said that in its first year, the group caught over 50 fish.

The Ontario trips can be expensive, but the club sells merchandise like stickers and t-shirts to cover the cost. The club has also used crowdfunding on the website Indiegogo to help fund this year’s Ontario trip.

Junior Jonathan Ripic is the club’s treasurer. He said he found out about the club through an Intercom announcement and had already developed an interest in fishing through his family.

“My dad’s family is a big outdoors family — hunting, fishing, the whole nine yards,” he said. “My mom grew up on the Susquehanna River in Owego, so they fished a lot in their backyard.”

Besides the Ontario trip, Ripic said, as treasurer, he is interested in setting up a trip to an outdoors store to stock up on lures and equipment, providing a social activity for the club members to get together and hang out.

He said the club is open to people of all experience levels and encourages anyone who has an interest in fishing to come to one of the meetings, which are held at 6 p.m. every other Monday in Williams 202.

“It’s a good opportunity for people who haven’t been involved in fishing but have always wanted to learn about it or try it out,” he said. “The chapel pond fishing is definitely a good way to get into that. There’s always an officer who is passionate about fishing and extremely willing to help someone who has never done it or doesn’t have experience.”