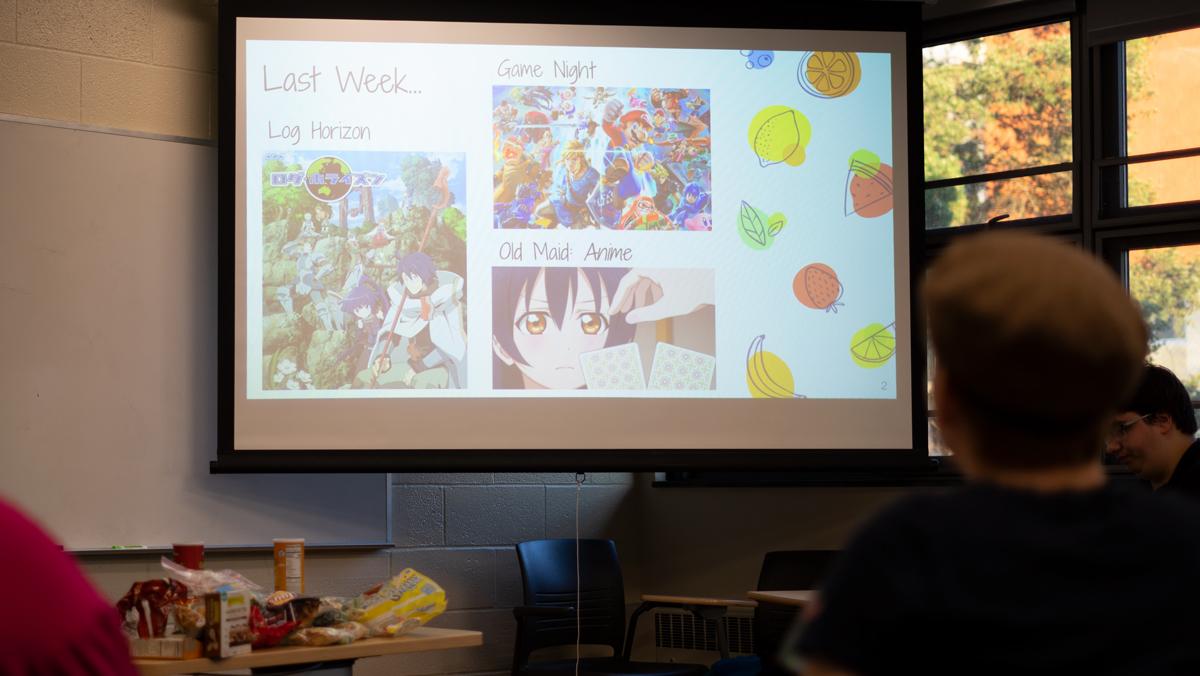 As students shuffle into room 302 in Friends Hall, Powerpoint slides referencing the “hiragana,” or Japanese writing, of the week are screened on to the projector. This week, they are “ka,” “ki,” “ku,” “ke” and “ko” — five of the 46 characters in the Japanese phonetic system.

After everyone learns how to pronounce and write these words, they collectively agree to watch an episode of “Log Horizon,” a Japanese animated TV show where a socially awkward gamer, Shiroe, is trapped inside the multiplayer online role-playing game “Elder Tale” and teams up with a group of other players to find a way out.

This is a typical occurrence at Ithaca College’s Anime Club, which meets every Monday and allows students to relax and watch Japanese-style animated TV shows, or anime, while meeting other people with similar interests.

Sophomore Miranda Ambrose, treasurer of Anime Club, first joined in Fall 2017. She said the presence of anime culture on campus was one of the major reasons why she chose to attend the college in the first place.

“Anime has always been a big part of my life, and I wanted to make sure that I went to a college that had an anime club,” Ambrose said. “That was definitely the biggest thing I was looking out for. I had my heart set on it, so that’s why I joined.”

Ambrose initially discovered her love for anime through her grandmother, who she would go to conventions with to help her sell corsets for her corset business.

“What I think is really special about anime is that it’s like any other form of media, like TV or a books series, where you have hundreds of plotlines and genres that you can get invested in to,” Ambrose said. “But there are things that you can do in animation that you can’t necessarily capture in real-life screenings. And with anime, there are a lot of really good storylines, characters and special effects.”

During meetings, members usually play games associated with beloved anime characters, like an anime version of Old Maid — a card game where people are split up into teams of four, given a set of cards with pictures of characters from different anime shows, and have to work together to bring the cards with matching characters together. After the game, everyone then chooses an episode of an anime show to watch from a group of three shows.

This semester, however, the group has been focusing more on integrating other aspects of Japanese culture into their club, like their “hiragana of the week.” Ambrose said that though incorporating cultural learning into the club is still a work in progress, this is one of the main goals for the club that they would like to achieve in the future.

“I think we’re going to have a more set plan for next semester because it was something we’ve talked about but never had time to fully develop,” Ambrose said. “We’re going to work toward maybe having a history day in the future. We’ve thrown around other ideas but haven’t fully implemented them yet.”

Though certain anime TV shows, like “Pokemon,” “Avatar: The Last Airbender” and “Yuri On Ice” have gained popularity in Western culture over the years, there is still a common stigma surrounding anime that it is a childish and nerdy medium. Sophomore Chris Chen, a regular member of Anime Club, said he feels that this common misconception of anime culture is changing due to the popularity of conventions like New York Comic Con and video games within the genre.

“There have definitely been times where I’ve felt weird about admitting it, but I’ve gotten so much positive feedback,” Chen said. “I’ll be like ‘Oh, I’m into kind of niche hobbies,’ and then people would say, ‘Oh no, that’s great, we love to hear things like that.’ It’s been pleasantly surprising.”

Though Anime Club is working on how to improve the organization as a whole, the executive board has numerous goals that it hopes to achieve in the future. Sophomore Cassandra LaRose, president of Anime Club, said one of her main goals for the club is hosting a panel at the college’s annual Ithacon next spring.

“We didn’t get to organizing a panel this year due to time constraints, but, hopefully, next year we’ll be able to coordinate early enough to create one,” LaRose said. “Anime has had such a huge impact on my life, so I think being able to show this different form of comics to other people in our community would be an awesome opportunity for all of us.”

As for those who are interested in joining, Chen said people should come for the fun of it, even if they have never watched anime before.

“I’ve watched a couple of shows before coming here, but I didn’t even remember what they were,” Chen said. “My friends have always told me to join, so I came to see what the hype was all about. And, what do you know, I ended up absolutely loving it and have been coming back ever since.”