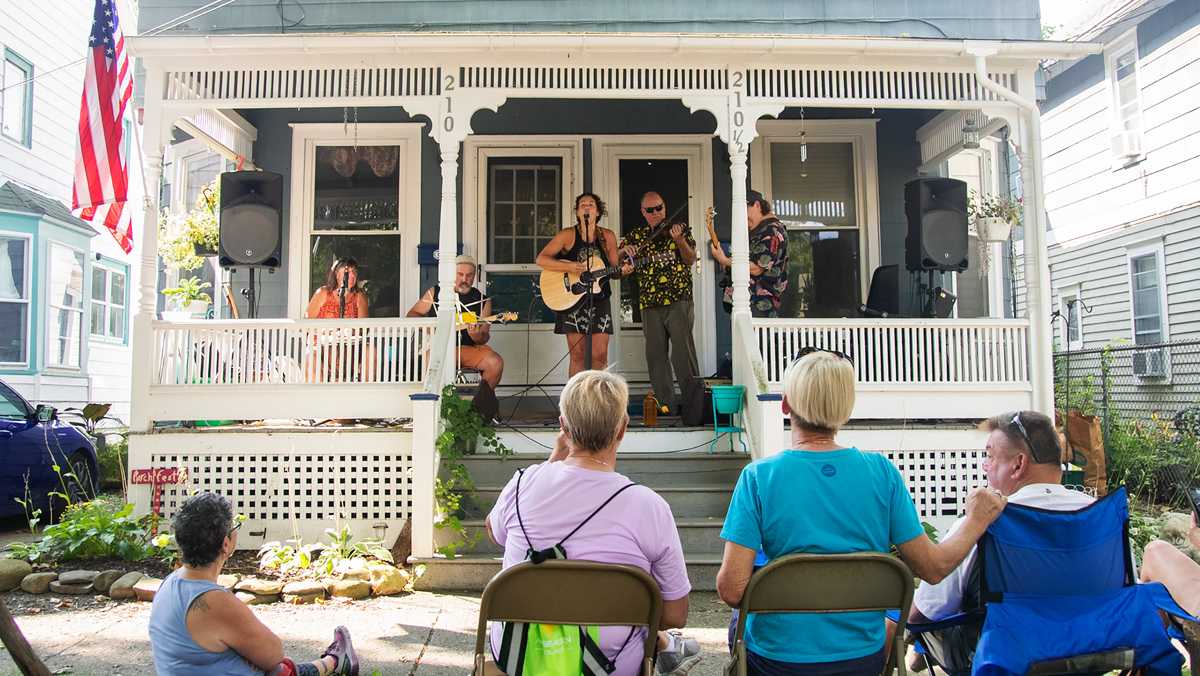 Kristen Harrison/The Ithacan
Spectators travel from house to house to watch bands, including Cielle, pictured, perform at Porchfest on Sept. 22 in the Fall Creek and Northside neighborhoods of Ithaca.
By Hannah Fitzpatrick — Staff Writer
Published: September 25, 2019

On a typically quiet street in the Fall Creek neighborhood, dozens of people crowded around the porch of an old house, dancing and singing along to the soulful croons and acoustic guitars of a local folk band. Around the corner, there stood a different crowd of people, headbanging to the screams of a local punk band as the delicate sounds of a chamber orchestra floated from across the street.

These sights and sounds were all features of the 12th annual Porchfest held on Sept. 22. The festival takes place in the Fall Creek and Northside neighborhoods in Ithaca and features performances from hundreds of local artists. This year, local food vendors like Silo Food Truck and Luna Inspired Street Food were also incorporated into the festival in two centralized locations, Thompson Park and Auburn Park.

Ithaca’s Porchfest in 2007 was one of the first porchfests held, and it is now one of the over 145 cities across the U.S. and Canada that hold its own form of the festival. This year, Porchfest also allowed people from volunteer groups and nonprofit organizations to give back to the community. This year, Ithaca Neighborhood Housing Services — an organization dedicated to revitalizing neighborhoods and helping low–to–moderate–income people obtain long-term, quality housing throughout Central New York — had volunteers direct traffic away from the closed off areas and help people find their way around the festival. Other volunteers were stationed throughout the festival to encourage people to register to vote while also giving away free ice cream to attendees.

Many local bands ranging from indie and folk rock to punk and heavy metal were featured at this year’s Porchfest, including Quail, Vee Da Bee and Jake and the Nowhere Men.

Victoria DeBerry is the lead singer of Vee Da Bee and a former Ithaca College student. Though this is her third time playing at Porchfest, DeBerry said it was a challenge to prepare for this show because she was sick on the day of her performance.

“I wasn’t even sure I was going to perform today given that my voice is a bit messed up,” DeBerry said. “But when I sang the first song, I just kind of pushed through and went for it, and I guess it worked out because everyone was grooving along to the music by the end of it.”

Despite the setback, DeBerry said this year’s Porchfest was her favorite because of the sense of community she felt throughout the day.

“It’s amazing when you play on the same porch every year, and you create that family that already exists in Fall Creek, and people come back just to see you,” DeBerry said. “Even though my voice wasn’t that great, people were just enjoying themselves and having a good time, and I really liked that everyone was just getting to know each other while listening to some good music.”

Even for first-time attendees, there was something for everyone at the festival. Freshman Allison Ross said that seeing the funk R&B band Quail was her most memorable part of the day because of her familiarity with people in the group.

“I’m in the percussion studio a lot, and two of my friends that are usually with me are in that band,” Ross said. “It was really cool to get to see our friends perform in front of a whole bunch of people.”

Freshman Sara Ostermeier said the act she was most surprised by was Tyrannical Vegetable because of how outlandish the group seemed to her at first glance.

Freshman Amit Rosenberg-Rappin said this event stood out to them because of how interactive it was with different members of the Ithaca community.

“You’re not just in The Commons or stuck on campus — you’re actually walking through different parts of town and getting more familiar with the area,” Rosenberg-Rappin said. “I’ve never been around these parts of town before, so it was nice to be able to explore with my friends while listening to some good music.”