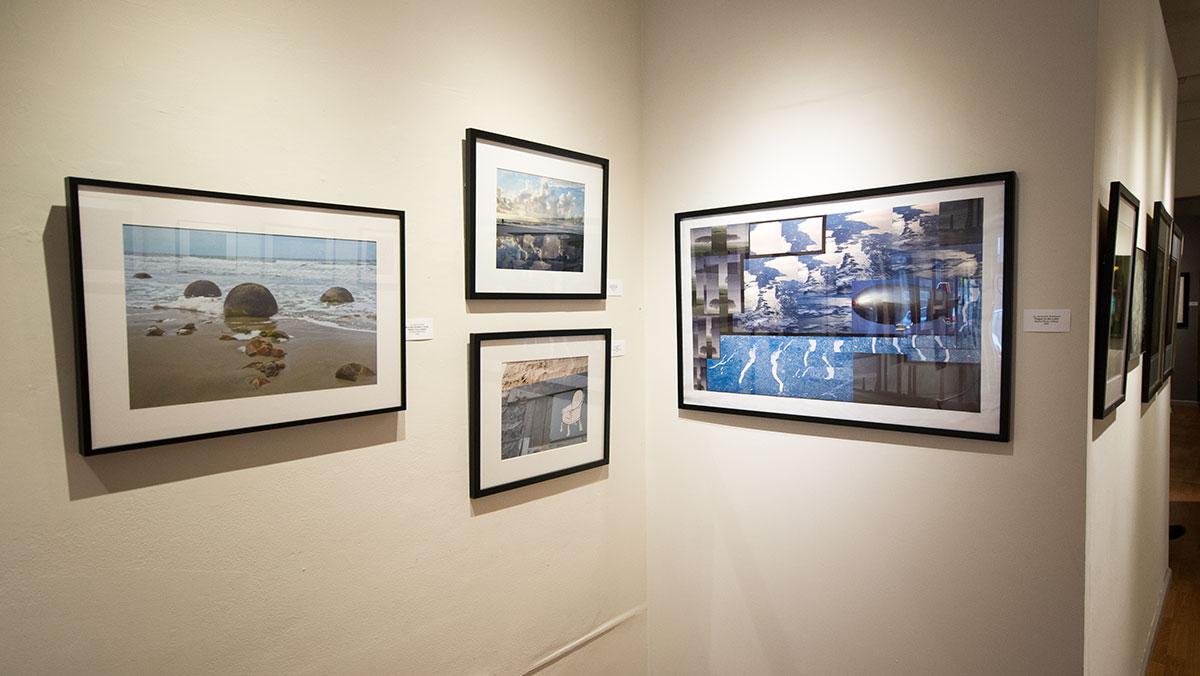 Tommy Battistelli/The Ithacan
Dozens of local photographers have their artwork on display at the State of the Art Gallery in downtown Ithaca.
By Angela Weldon — Staff Writer
Published: March 25, 2015

A missile, a man smoking, a river in Vermont: these seemingly unrelated subjects appear in some of the 85 featured photographs in this year’s Annual Juried Photography Show at the State of the Art Gallery located at 120 W. State Street in downtown Ithaca.

This 26th annual exhibit, open from March 4–29, incorporates a wide variety of photographs and shows off the talents of local artists. According to the SOAG website, the annual exhibit features photographers in the Central New York area who wish to enter their recent work.

David Watkins, a member of the gallery for over 10 years, has helped coordinate the annual show for the last few years.

“Each year the show gets better, and this year is no exception,” Watkins said. “The show has also become more regional with applicants from the NYC area, to Buffalo, Ohio and of course a several county area around Ithaca.”

Stan Bowman, member of the gallery and former photography professor at Cornell University, said any photographer who is able to personally bring in their pictures to the gallery is eligible to submit up to two works for consideration for the show. Bowman said the gallery looks to take the most current work from photographers, usually within the past three years. A group of photographers, who are members of the gallery, then reviews all of the applicants and selects those who will be displayed. In addition, a judge, usually from outside of the gallery members, awards prize money to selected artists.

Since this is a community show, Watkins stressed the importance of the annual photo show.

“We’ve held this juried show ever since we opened 26 years ago, so there is certainly important history here for the gallery and the community,” Watkins said.

Although this 85-piece collection features diverse works, the photos fall together to form one cohesive exhibit. Showing a balance between nature and portraits, the photographs become interconnected. The featured artists chose to aim their focus toward either landscapes and nature, such as trees, flowers, animals and bodies of water, or human portraits, which play with light in different ways. This miscellaneous collection is both enjoyable to view and thought-provoking. The gallery showcases some of the best work local artists have to offer, and it does not disappoint.

One recurring method seen in this year’s show was the abundance of black-and-white prints. Making up 20 of the 85 photographs, the colorless pictures hold the tightest bond among the work. These 20 pictures are all striking, and the choice to capture the scenes in black and white definitely enhances the photographs.

Bowman said he was pleased with the increase in black-and-white photographs selected.

“That’s the one thing I’m noticing in the last few years, and that seems to be growing in popularity, which I find kind of funny because when I started photography in the 1950s it was black and white because that’s what you had,” Bowman said. “It’s really interesting to see these things changing as time goes by, but I’m really keen on having people return to doing black and white.”

Adam Baker, Ithaca College’s senior multimedia producer and developer, has two photographs of rivers and waterfalls featured in the show. He said he agrees that the trend toward black-and-white photography is innovative and prominent in this year’s exhibit.

“Everybody’s got a camera these days, and everybody can take a great shot, and I think black-and-white photography requires a different thought process. And that shows there is a lot of thoughtful work going into it,” Baker said.

Apart from Baker’s pieces, some of the highlights of this show included works by three other Ithaca photographers: Sarah Carmen, Jon Reis and Elaine Derby.

Carmen created two images, “Leaf of a Portrait” and “Three Walls and a Window,” which both explore different mediums, generating three-dimensional photographs and inventive pieces. In contrast, Reis’s “Missile and Six Tumbleweeds, Banning Municipal Airport, Riverside County California” tells a more old-fashioned story, framing a still life of a missile resting on an airport fence. Reis has been working for 25 years on this “aviation anthropology” theme, photographing the culture of aviation. Derby, another standout, displayed two portraits of feminine wisdom with which she said she hopes to honor women at a crucial time as they are experiencing a spiritual awakening of the divine feminine.

The most impressive photograph in the collection was one of Brian Maley’s two works, “Headman Has a Smoke,” which breathtakingly showcased a man from Malawi smoking a cigarette in black and white. Maley ’13 took first place in the college’s International Education Week Photo Contest 2013 with this photo he shot while abroad in Africa.

This gallery is definitely worth a look because the talent of these 63 local photographers shouldn’t go unnoticed. Baker said he was impressed by the compilation in the 26th Annual Juried Photography Show.

“In my opinion, I think that the photo show always has a great collection and diversity of photography,” Baker said. “I think it really goes to show how much talent there is in this town when it comes to art and photography.”