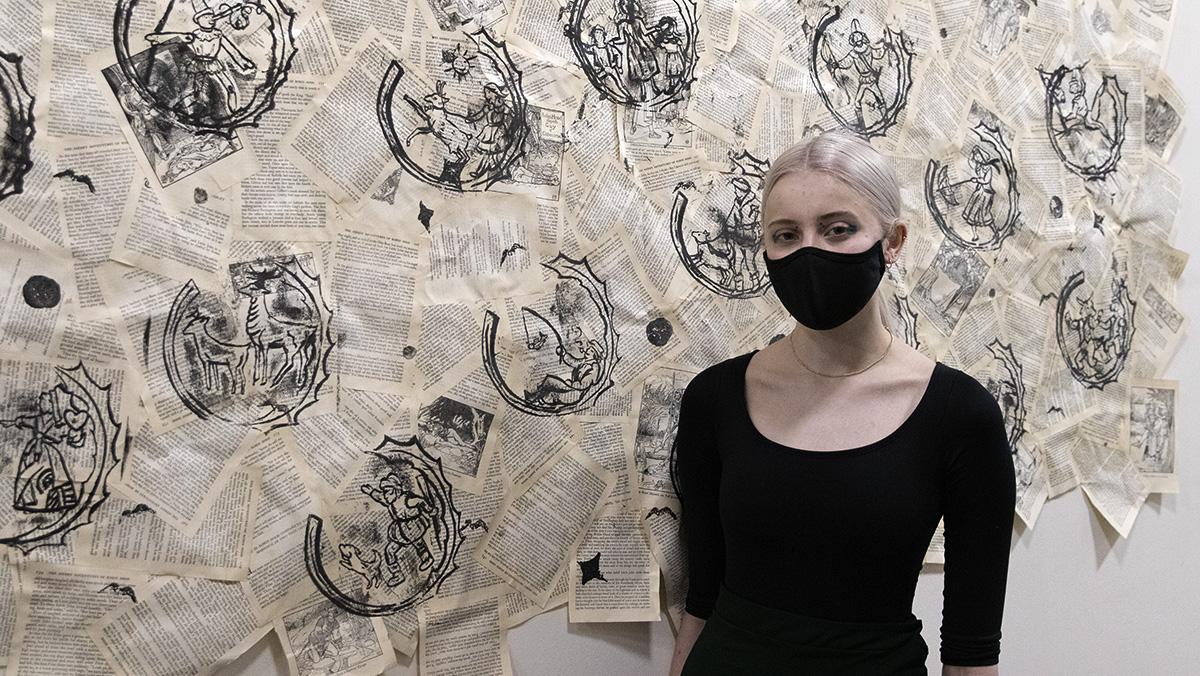 Entering inside from the windy, early winter temperatures outside, students and faculty of Ithaca College along with locals from the community join together at the South Hill Business Campus in the appreciation of art. Along every wall of the hallway are paintings and sculptures made from oil, ink, pastel, acrylic paint, flowers, ceramic, watercolors, charcoal and colored pencil.

Bill Hastings, assistant professor in the Department of Art, said all nine students from his seminar are represented in the show, and he was able to invite one additional student to have their art shown as well. Hastings said the class decided to have an open invitational with no specific theme for the art to be designed around, allowing for students to be creative in their designs.

“I think [the art] showcases what’s strong in our department,” Hastings said. “We have in this space prints, paintings, drawings, sculpture and then a mixed media piece. It’s a real sort of overview of what we teach.”

Hastings said he thinks being back on campus and the ability to make art in the studio again has helped to build community between the students and the larger campus as a whole.

“I think it’s very important that our students have an outlet to show work,” Hastings said. “I just think it’s a great way to express yourself.”

The pieces in the show feature many different elements and artistic perspectives. Hastings said this shows the diversity of where students are coming from.

Junior art major Angelica Ballard said she thinks Hastings’ seminar has been informative, and his class is all about how students can put their art out in the world through exhibitions, along with the business aspects of the industry.

“I’ve learned so much this semester,” Ballard said. “About the art world and things that I probably wouldn’t have even considered being included with art.”

Ballard said her art in the exhibition is an abstract depiction of the ocean. She also said her art series on mental health has changed over time, with more disorderly paintings that depicted her depression at the beginning.

“I was painting a lot of darker paintings and a lot more chaotic, not really balanced [images],” Ballard said. “Now towards the end of the series, it’s kind of more delicate and gentle.”

Ballard said she feels the act of creating art can be therapeutic for artists, as it helped her get through the COVID-19 pandemic by providing a fun and relaxing outlet.

“I would say it’s like a form of meditation,” Ballard said. “You just get to do what you want to do … you can let everything flow out of you onto the paper.”

Junior art major Dylan Zink said he found the seminar class to be helpful, opening his eyes to what opportunities lie ahead in the real world outside of the classroom.

“It’s been extremely beneficial in even setting up an exhibition,” Zink said. “That was … the first time I’ve ever done anything like that.”

Zink’s piece is much smaller in comparison to the other art on display. Zink said he used a combination of photoshop, drawing on plexiglass, reduction paint and gamsol to create his visual representation.

Zink describes his artwork in the exhibition as a visual representation of a philosophical paradox, Zeno’s dichotomy — the idea that two objects can never touch. Zink said that throughout his entire life, he felt abstraction was too vague and the lack of visual precision bothered him.

“I started realizing the potential and what kind of emotions you can bring to the table through abstraction,” Zink said. “It’s opened a lot of doors for me creatively.”

Senior Lauren Reid, a double art and psychology major, said she doesn’t believe in the discourse around “good” or “bad” art because she believes people take in what resonates with them the most.

“I want people to be moved by [my art],” Reid said. “I think it’s also cool for people to just take in what they take in … they can see their subjective experiences.”

Reid said she loves the exhibition and all of the art represented in the show. Because she knows the artists personally, she said she feels like she can see her peers’ different personalities in their individual works.

“I’m so happy that everybody’s work is so different and beautiful,” Reid said. “And it’s really, really fun talking to people that walk by it … going back-and-forth talking about art.”

For her own personal piece in the exhibition, Reid said she drew from a recent personal experience in which her friends were all struggling during a particularly stressful week. All the people Reid said she talked to during this week expressed the difficulties they were facing, which Reid’s oil on canvas piece reflects on.

Reid’s large painting depicts figures emerging and disappearing within the picture plane, including abstract imagery of human bodies. She said the concepts in her piece are similar to much of her other art, with a theme of humans connecting together and understanding life. She uses many colors, faces and bodies to express herself.

Junior art major Rhiannon Augustine said she thinks there are many learning curves in having to set up and install work.

“When we were installing, we had to collaborate and see which pieces look best next to each other,” Augustine said. “Hopefully I’ll get more experience with exhibitions and showing art.”

Sophomore art major Jack Hassett was selected by a student in the seminar class to have his art shown in the exhibition. Hassett said he was inspired to become an artist by a book that his grandfather gave him when he was younger.

“I think [art] is very cathartic,” Hassett said. “Art allows me to express myself in ways that I wouldn’t be able to normally.”

Hassett said he had never been in an exhibition before and didn’t know what to expect. He said he found the social aspect of the event to be calming and that it took some of the nerves off having his art shown in a public venue.

“It’s interesting to be able to have such a wide variety of work for a bunch of different students,” Hassett said. “Especially considering that every student made a piece with a different vision in mind.”

Hassett said his piece is a juxtaposition of one of Ithaca’s gorges. His visual piece symbolizes the hopefulness for the future with the city landscape blending into the natural environment.

“The ability to create something visual, and then show that to someone,” Hassett said. “It makes conversation a little easier.”