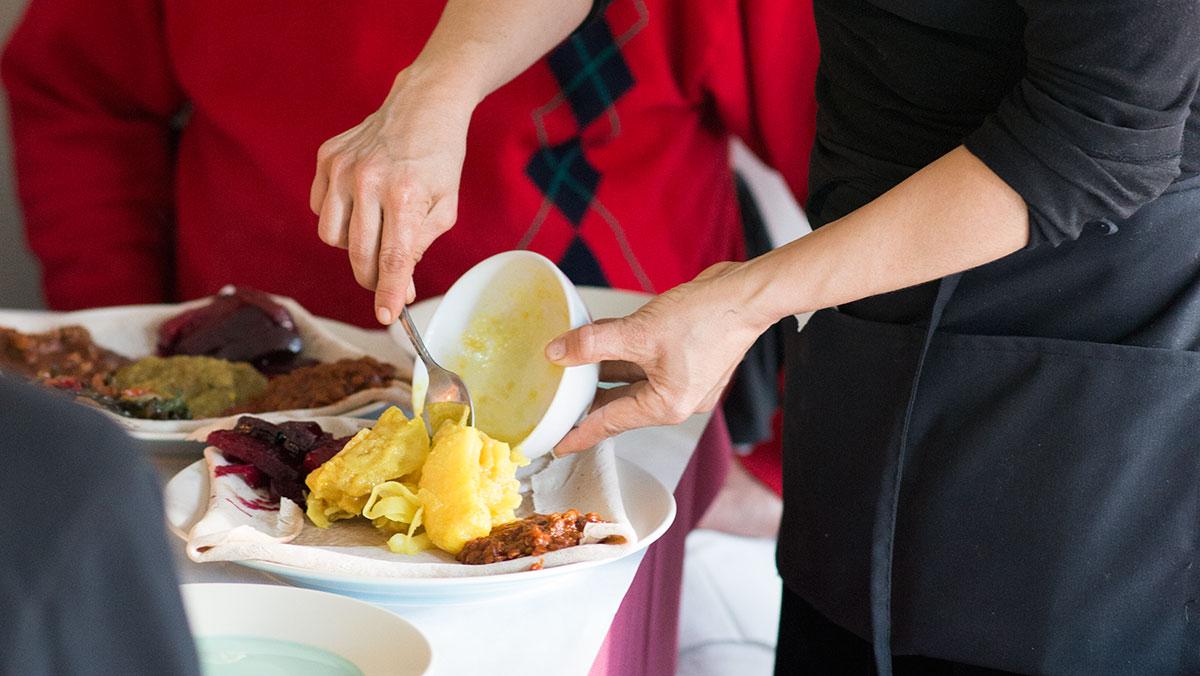 TOMMY BATTISTELLI/THE ITHACAN
A server spoons a bowl of cooked vegetables onto a platter March 24 at Hawi Ethiopian Restaurant. Ethiopian food is usually served with injera, a flat, fluffy bread, and is eaten without silverware.
By Ilana Diamant — Contributing Writer
Published: March 25, 2015

While Ithaca boasts an impressive range of American, European and Asian restaurants, African cuisine has been conspicuously absent from Ithaca’s food scene. Enter Hawi Ethiopian Restaurant, located at 113 S. Cayuga Street, the first venture in restaurant ownership from Citra Mohammed and Gadise Degebasa, who previously worked together in an Ethiopian restaurant in New York City. With a goal to bring both traditional and innovative, personal recipes to the table, Mohammed and Degebasa designed Hawi to add new flavors to Ithaca citizens’ palates.

“We hope to bring the wonderful sharing experience that Ethiopia has … the meals are shared,” Mohammed said.

This notion of sharing that Mohammed, who is Ethiopian, refers to is regarding the way meals are served in Ethiopia, and thus in this restaurant: Guests are served a large platter with injera, a spongy, sourdough flatbread, that is then topped with whatever dishes the guest orders. Food is eaten by hand, a departure from American and European dining customs. There are options on the menu for meat-eaters and vegetarians alike. Mohammed is a vegan herself, and pointed out that all the vegetarian items on the menu are vegan as well.

The decision to open Hawi in Ithaca came after much research on the part of Mohammed and Degebasa. Mohammed said they visited the town in the months before they made a decision, and its diverse food scene and location were the prime reasons for opening the restaurant here.

“We came here once [to see the space] and tried many different restaurants in one day … a lot of international places, and the people were very open-minded,” Mohammed said. “We also found out that Ithaca is one of the greatest American college towns, so we decided to give it a try.”

Degebasa, after her time working in New York City, said she is happy to have found this location.

“I worked in New York for two years, but Ithaca is a very good place for the restaurant because Ithaca is very different and the people seem to really like the food,” Degebasa said.

Located at 113 S. Cayuga St., its placement in the center of Ithaca makes it a prime option for both Ithaca College and Cornell University students.

Though the soft opening was scheduled for March 11, the pair said a piece done by the Ithaca Voice brought so many Ithacans to the restaurant that week that it became the restaurant’s grand opening.

“We didn’t expect that many people,” Mohammed said. “The house was packed.”

As Ithaca’s first Ethiopian eatery, Hawi highlights the diversity in Ithaca that some may not have realized existed. Mohammed said the Ethiopian community was incredibly welcoming before the restaurant even opened, and in the hectic first days after opening, local Ethiopians offered to help wait tables when the service was slow, though Mohammed said he couldn’t, for the local’s sake, accept their help.

“Of course, we didn’t let them,” Mohammed said. “We didn’t want to stress them out.”

So far, the co-owners said they have received good feedback from their patrons and a warm welcome to Ithaca.

“The food was authentic and the service and staff were very welcoming,” Foote said. “I really enjoyed the vegan options and the way spices were incorporated into the food.”

Ethiopian cuisine may be a new experience for many Ithaca-area students, as the dining customs and flavors differ greatly from many of the restaurants in downtown Ithaca. The vegetable dishes, often consisting of split peas, lentils, beets, chard, potatoes and carrots, can be quite spicy. All the vegetables used in Hawi’s kitchen are unprocessed, and there is very little oil used in the food preparation, making this cuisine a healthy option. Gluten-free substitutions exist as well, including a gluten-free version of injera.

Guests also have a wide selection of beverages to choose from. Foote said the aroma from her Ethiopian-spiced tea made her experience at Hawi feel cozy and comfortable. In addition to a variety of teas and coffees, there are juices and sodas.

For Mohammed, who has wanted to open her own restaurant since she came to the United States four years ago, Hawi is a way to introduce Ithacans to a dining experience not found elsewhere in the town. While the restaurant currently offers lunch, dinner and pick-up service, Mohammed said there are plans to begin delivery service in the future, along with a breakfast option.

Hawi’s authentic Ethiopian cuisine may make it a standout in downtown Ithaca. With the restaurant acting as Ithaca’s first Ethiopian eatery, Mohammed said she is looking forward to the summer tourism season, when visitors set out to get a taste of Ithaca.

“I think people will have more places to choose from, and I hope other international places will join soon, too,” Mohammed said.