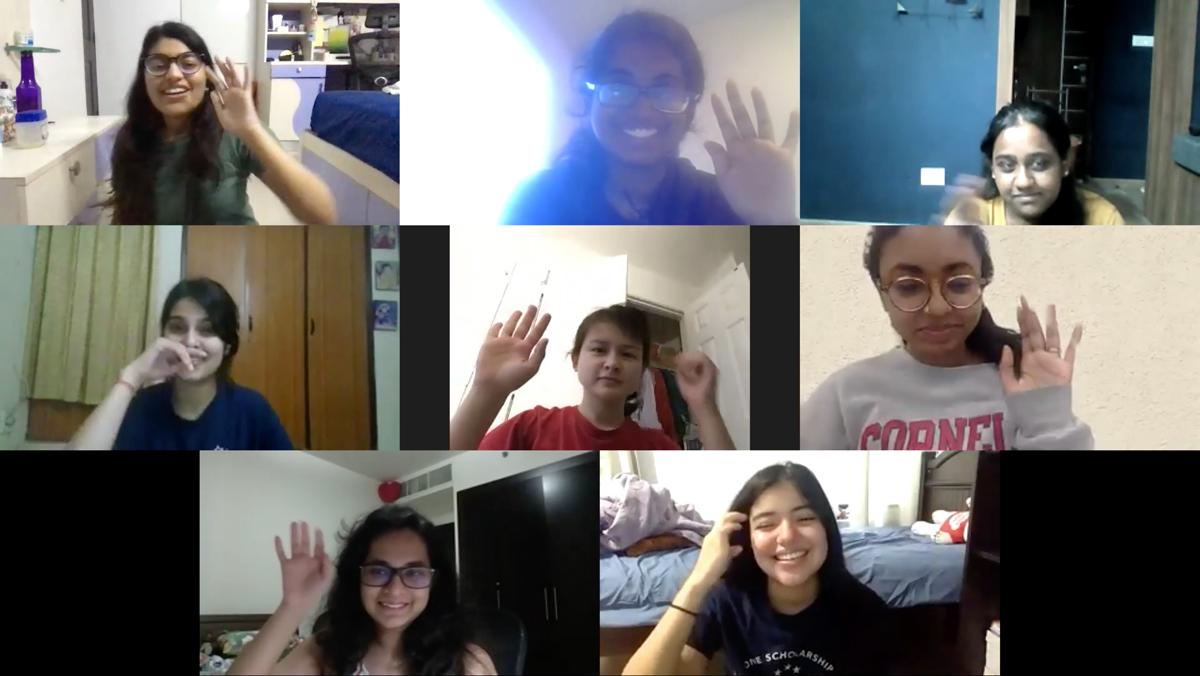 Courtesy of TAMASHA
TAMASHA is a new Bollyfusion-focused dance club at Cornell University. The dance group is open to anyone at Ithaca College and combines traditional Bollywood dances with dances from other countries.
By Molly Sheets — Contributing Writer
Published: November 4, 2020

Loud, traditional Indian music mixed with a hint of American pop blasts through the speakers at a TAMASHA club meeting. Thirteen college students — watching each other through computer screens — dance quickly, with sharp and detailed movements. Although they are not physically together, the energy is high.

This is a typical virtual meeting for TAMASHA, a new Bollyfusion-focused dance club at Cornell University. The dance group, which is open to anyone at Ithaca College, combines traditional Bollywood dances with dances from other countries, like South Africa and Mexico.

The word “tamasha” means a grand performance, especially one involving traditional dance. In most forms of traditional Indian theater, the main roles are played by men, according to Encyclopedia Britannica. However, in tamasha, the lead role is female. The original tamasha plays were created to entertain encamped armies. Now, tamasha has grown into a commercially successful performance.

Bollywood is the Indian, Hindi-language film industry based in Mumbai, India, and Bollywood dance is a blend of all Indian dance styles. These dance styles could be traditional and classical, or they could include more modern dances like hip-hop. Aadya Kaktikar, associate professor in the Department of Arts and Performing Arts at Shiv Nadar University in India, said that Bollywood is a fairly well–documented dance style, especially with the current globalization and commercialization of the form.

“I personally feel like Bollywood itself is fusion,” she said. “We want people to just come in and be themselves and bring whatever part of themselves they want to.”

Dancers typically start in a formation like diagonal or straight lines. The dances are fast-paced and involve constant movement of the dancers’ feet and hands. The music is either a traditional Bollywood song or a mashup of different songs from other cultures. In some Bollywood dances, the choreographers incorporate American pop artists and classical Hindi film songs.

TAMASHA is open to anyone at any experience level, Seth said. The club’s president and Cornell University junior Anusha Choudhury formed TAMASHA in August. She said she hopes to create an environment in which students can come together to simply release stress and dance.

“Whenever you watch a Bollywood movie, you realize that you are the star of your own story,” Choudhury said. “That is what the entire idea of TAMASHA is.”

Seth said she agrees that TAMASHA is a safe and encouraging environment.

“We just wanted to create a more open and accepting space,” she said. “That is the essence of our club.”

Being a new club, it has been difficult for TAMASHA to reach out to students to become involved, Choudhury said. A virtual semester for students at Ithaca College means that students must reach out to an executive board to get involved in a club rather than going to a club fair on campus.

Cornell University junior and TAMASHA treasurer Vineetha Pachava said she joined the club for more than just a creative outlet.

“I wanted to learn something new, but I also wanted to have fun and make friends,” she said. “People seem to enjoy it, and that’s what counts.”

There are approximately 13 members of TAMASHA. Three of these club members are students from the college, and seven of them are executive members. Some of the club members are attending school virtually in India this semester, including Choudhury, Seth and Pachava.

In Fall 2020, 12 international students at the college are from India, according to the Office of Analytics and Institutional Research. At Cornell University, in Fall 2019, 151 undergraduates were from India.

Ithaca College sophomore Farah Ahmed also joined TAMASHA. She said the sense of togetherness through dance appealed to her despite the fact that the club is currently online. These meetings are held on YouTube Live, Instagram Live and Zoom, platforms that help reach a larger audience.

Pachava said that dancing online certainly has its struggles.

“The thing that is so hard about being online is that with song and dance, you usually build off of other people’s energy,” Pachava said. “Even though on Zoom there are still people around you, it is still a little hard to practice to your full potential.”

TAMASHA hopes to incorporate even more cultures in its Bollyfusion group with the help of its club members.

“TAMASHA is not only about Southeast Asian culture,” Seth said. “It is about bringing yourself and your own culture into your community. You can be completely new to everything, and we will accept you with open arms. This is what TAMASHA is truly about.”