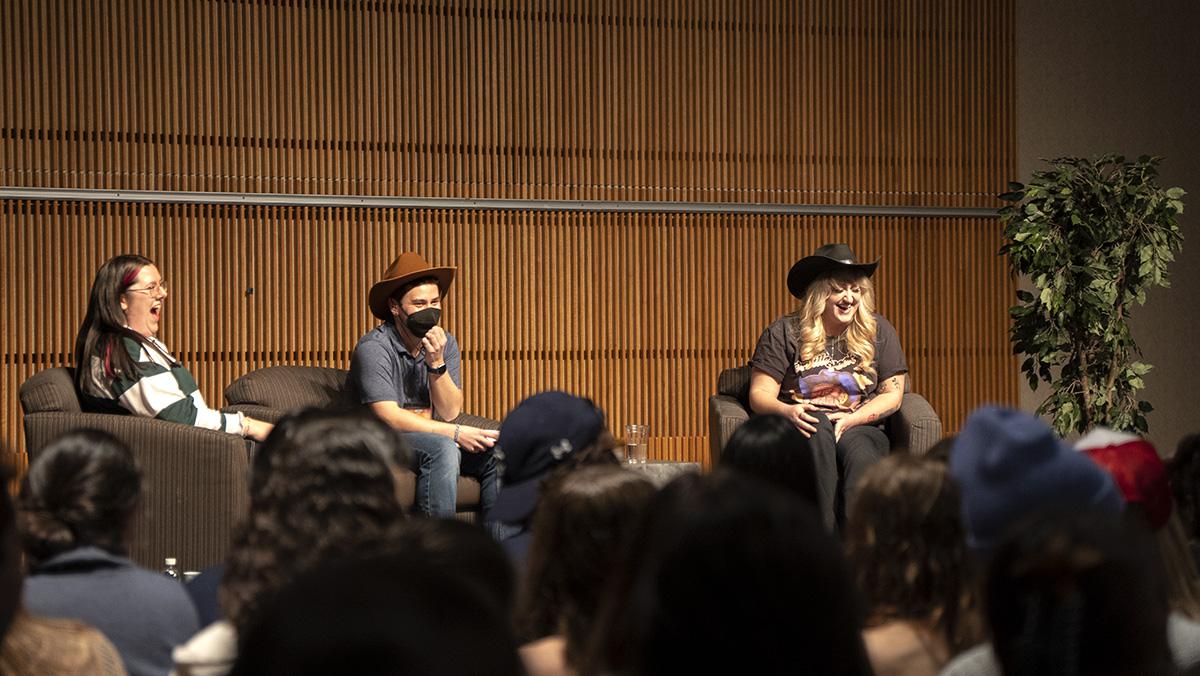 Students excitedly line up in front of Emerson Suites with tickets in hand. Once they enter the room, seats begin to fill up to full capacity until the show finally begins. Fans chant and scream in anticipation for Brittany Broski as she takes the stage, happily greeting the audience.

On April 19, Ithaca College’s Student Activities Board (SAB) presented TikTok and social media sensation Brittany Broski in an hour-long Q&A and late night talk–show-type presentation. Broski currently holds 6.8 million followers on TikTok and 960K followers on Instagram. Giveaways for meet and greets on SAB’s Instagram were also given along with opportunities to ask Broski questions by messaging the Instagram.

Broski came to fame for her short and humorous TikTok videos, largely due to her video tasting kombucha for the first time that was posted in August 2019. This coined her the nickname “Kombucha Girl” and is just one of numerous viral videos that have made Broski internet famous. Following her video, Broski was fired from her job as her content went viral on Twitter with many people responding with explicit captions, leading to her boss becoming concerned. Following this, Broski started to create more videos with accents, impressions and skits that grew her outreach and helped to pay her bills rather than staying a one-trick wonder.

Throughout the evening, Broski answered questions about her comedy, social media presence, upbringing, beliefs and more, leading to a night full of laughter and smiles from across the audience. Sophomore Annalese Winegard, co-president of SAB, and social media chair Ben Berkowitz interviewed her and moderated the Q&A. At one point, Broski answered a question regarding her mental health, saying that she doesn’t take care of it. However, she encouraged students to take care of themselves and follow their passions, expressing enthusiasm for their enrollment in college.

Freshman Mackenzie Ward said one of Broski’s responses that stood out to her the most was when she mentioned how students should really cherish their time in college because it will go by quickly.

“It was a really nice reminder as to how fun and interesting college can be,” Ward said. “We should always try and make the best of it.”

“It was only from the ages of 15 to 25 really,” Broski said. “And then we saw this transition around December of 2019 when Charli [D’Amelio] and Addison [Rae] and Dixie [D’Amelio] and all these people got super viral. Then we see brands come in, celebrities, record labels pushing their songs.”

Senior Becca Feeney is the chair of the special events committee for SAB. She said that after holding events like plate smashing and drag queen bingo this past semester, SAB knew they wanted to do something big for their comedy event. As a proud alum of Texas A&M University, Broski has also visited other colleges, like the University of Miami, St. Lawrence University and Georgia State University.

“We contributed more money to [this event] and when we were given the list of acts, Brittany Broski was the one that stuck out,” Feeney said. “It was the name we felt like even people that weren’t super into the traditional stand-up comedy scene would know and want to see.”

Annalese Winegard said all the behind-the-scenes preparation paid off because the event was a success.

“It was so rewarding to see a room full of students supporting a club event,” Winegard said. “[Broski’s] target audience is basically the students at IC in a nutshell.”

Winegard said Broski keeps everything authentic and real, which makes her a valuable presence on social media.

“I love that her content is very real and vulnerable, it’s refreshing to see someone with a platform who doesn’t just go after views and followers and money,” Winegard said. “She loves the connection and friendship she has with her followers, and that is one thing I really like about her.”

Ward said she felt that the event went really well and enjoyed the atmosphere surrounding it.

“I enjoyed listening to [Broski] talk about her experiences with social media and also just moments where she was being goofy,” Ward said. “Everyone there seemed to be enjoying themselves and it was really fun but laid back at the same time.”