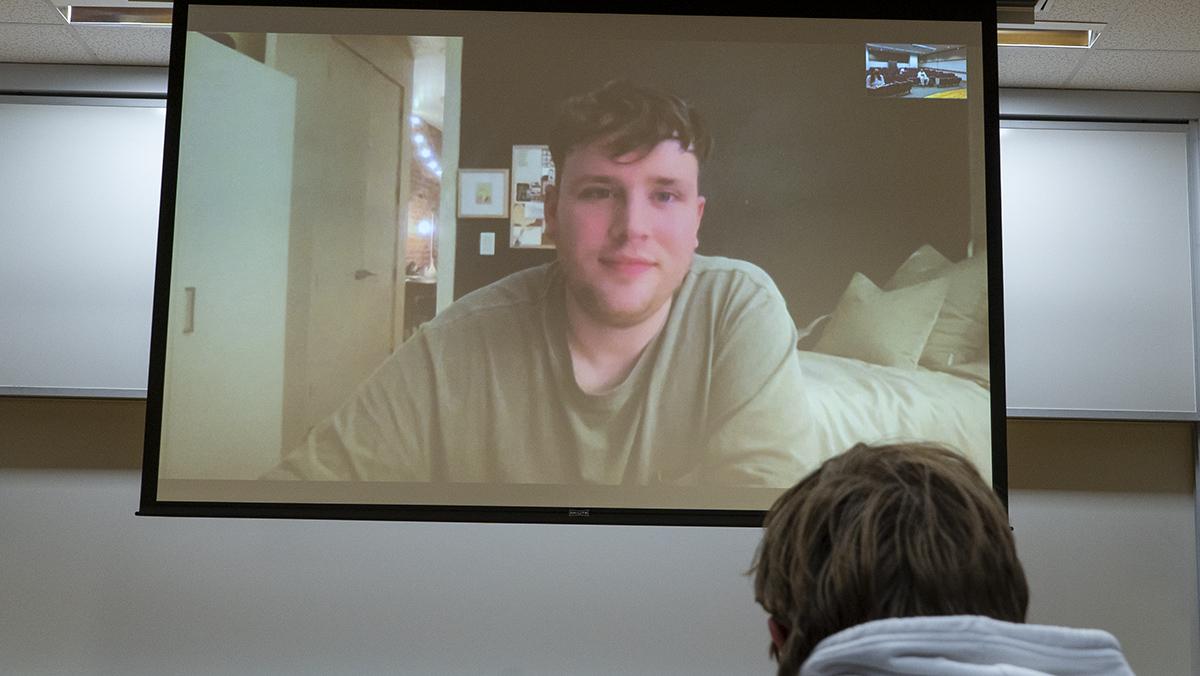 The Ithaca College Showchoir welcomed Tony-nominated Broadway actor Grey Henson, who has starred in roles like Damian from “Mean Girls” and Elder McKinley from “The Book of Mormon,” to a meet–and–greet via Zoom on Dec. 2.

Students met in the James J. Whalen Center for Music, Room 2105 for approximately one hour of conversation with Henson. Henson’s Q&A was part of IC Showchoir’s “Night with Broadway” series. The next Q&A in the series will feature Christy Altomare, best known for her role as Anastasia in the musical of the same name.

High attendance rates for the events and positive feedback on Zoom led IC Showchoir to continue the series after students returned to campus.

IC Showchoir usually chooses which actors to contact based on the popularity of the shows they are in. Previous guests include former “Wicked” cast member Kara Lindsay and Kevin Chamberlin, who is best known for his role as Bertram on Disney Channel’s 2011 show “Jessie.”

Henson was invited to talk with students about his career and college experience, speaking primarily about his time in the 2020 musical “Mean Girls,” adapted from the cult classic 2004 film by Mark Waters. Henson said the show holds a special place in his heart because unlike his time in “The Book of Mormon,” which began its Broadway run in 2011 with Rory O’Malley as McKinley, Henson was the first actor to play his “Mean Girls” character’s role on Broadway. Henson also spoke about working closely with famous actress and comedian Tina Fey, as Fey was closely involved with the show and coached him through his role as Damian.

“I don’t normally get starstruck by famous people,” Henson said. “But there’s some part of her I felt so comfortable with. She’s nothing like her character on ‘30 Rock’ Liz Lemon, she’s so reserved and put together, yet still warm.”

Henson’s time in “The Book of Mormon” also included some celebrity mentorship, as the show’s creators Trey Parker and Matt Stone worked closely with the cast. Parker and Stone are best known for creating the popular animated comedy series “South Park,” which has been airing since 1997.

“Trey and Matt were great. They were so involved with the show from the beginning, it’s like their baby” Henson said. “They were always present for rehearsals and working to make the show as good as possible.”

Carchedi said she believes the benefit of the Q&As is the advice Broadway stars give to theater students and Broadway fans. Through these Q&As, stars are able to turn their careers into valuable advice for students regarding auditions, agencies and more.

“One cool thing about these events so far is how nice and genuine these artists have been,” Carchedi said. “Artists even offer to look at videos of students’ performances, they build really genuine connections with us.”

Freshman Sam Wurdemann attended the Q&A and has been to other “Night with Broadway” events in the past. A film, photo and visual arts major with a passion for musical theater, Wurdemann said the ability to talk to such big stars is both inspirational and valuable.

“I know Grey Henson from both ‘Mean Girls’ and ‘The Book of Mormon,’” Wurdemann said. “Damian was always my favorite character, I love his songs so much. So when my friend told me about this event I thought ‘Wow, I have to RSVP while I still can!’”

Wurdemann was able to ask his question regarding insecurities Henson has experienced while following his passion, directly to Henson, turning the Q&A into a personal conversation.

“I knew I wanted to ask him about moments in his career when he had doubted himself,” Wurdemann said. “He gave me a really good answer about how everyone feels that way at times, we had a great conversation about it.”

Opera direction program to start at the college in January