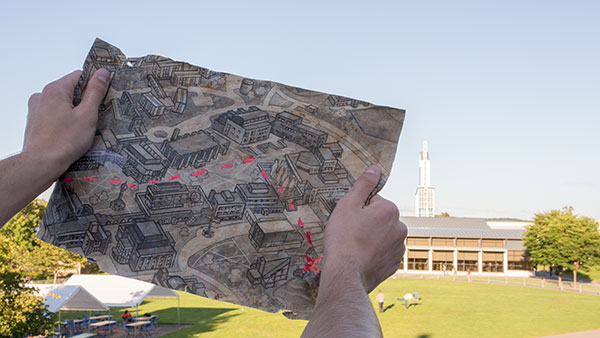 Sophomore Molly Astrove is hiding something — or at least planning to, anyway. She has been plotting and constantly spying around for hiding spots, brainstorming over the nooks and crannies of the Ithaca College campus. For the last few days, she’s been sneaking about the college’s grounds, stealthily slipping gift cards and coupons where they will be far out of sight, ready to be stumbled upon by one of the campus’ many residents.

“The trick is to hide them in a place where a lot of people will be,” Astrove said. “But not to hide them when anyone is around.”

Astrove is no charitable ninja, nor is she an anonymous philanthropist. If anything, she’s an advertising agent, promoting a bevy of Ithaca’s own small businesses through the help of the startup Campus Pursuit, a social media–fueled treasure hunt that pits the whole campus against itself in a race for gift cards, coupons and more — and it has found its way onto the college’s campus.

This college-centric hunt for booty is the brainchild of Scott Wisotsky and Shachar Avraham, senior and junior, currently attending Binghamton University. Friends and roommates, the two found themselves dissatisfied with the ways local businesses were reaching students in the nation’s many college towns. Be it television, radio or newspaper, Wisotsky and Avraham felt these current methods of advertising failed to grip students on college campuses.

“We feel that traditional modes of advertising, such as newspaper ads and radio, and even television commercials, are just becoming outdated,” Avraham said. “Businesses and restaurants within college towns are having trouble effectively advertizing to college students.”

Their solution is their own original concept called Campus Pursuit, which merges the intrigue of a scavenger hunt with local advertising, appealing to students’ curiosity in order to bring attention to the local businesses around them.

It all begins with a few select students like Astrove, who take the reins as their campus’ leaders. She is one of three on campus, and applied for the position after seeing an ad for it on Facebook. She said Campus Pursuit’s success on Binghamton University’s campus, where almost 1,200 students took part in the hunts, piqued her interest immediately.

“Hearing about it at Binghamton, it’s like, ‘Wow, can we start that at Ithaca?’” Astrove said. “I felt like it could be this big, campus-wide thing.”

Once assigned their positions, these leaders are provided merchandise from sponsored local businesses and tasked with hiding it about the campus each day. A free app, available for both iPhone and Android devices, notifies participating students when new prizes have been hidden, and when they have been subsequently uncovered.

The college’s first scavenger hunts began Sept. 2, and since then over 20 prizes have been hidden, all of which have been found. The hunts happen Monday through Friday. Wisotsky said this neverending scavenger hunt turns advertizing into a diversion for students and makes the program engaging for its participants.

“Our value proposition is that we are the most fun way to advertise to students,” he said. “It’s just an engaging, new way to interact with millennials.”

And if the City of Ithaca boasts anything, it’s a hearty supply of millennials. With Cornell University and Ithaca College drawing in over 30,000 students to the city, small businesses have a massive population of young adults to cater to. This dynamic is one that Wisotsky said is distinct to Ithaca and made the city an attractive place to bring this “treasure-hunt marketing.”

Of these businesses, breakfast spots like Collegetown Bagels are notable hotspots for students. Katherine Banko, marketing director for Collegetown Bagels, first heard of Campus Pursuit after Wisotsky and Avraham reached out to her. Banko signed on as a sponsored business, along with other shops such as Mimi’s Attic and The Art and Found. Banko saw an opportunity to form a better channel of communication with Ithaca’s student body, something she said is key to advertising to students.

“I think with students, marketing is a lot more successful if you have a two-way conversation instead of just putting a big sign in front of their face,” Banko said. “They’re bombarded with that stuff all day, every day. Everybody is.”

Banko also express the notion that, for such a young and educated city, the businesses have barely touched more modern means of marketing. It’s within this that she said Campus Pursuit may stand out.

“I think this is an extremely intelligent city, but a very not-tech-savvy city,” she said. “I don’t think small businesses have really tapped into Internet marketing and that type of student outreach … So I think Campus Pursuit is a cool solution.”

Apart from its business intentions, however, Campus Pursuit is quite the social animal — by nature, the scavenger hunt is a riotous combination of cooperation and competition, a dynamic that Astrove hopes will provide a degree of unity to participants and to the campus as a whole.

“I think it’s an individual thing where you’re competitive with other people trying to find stuff,” Astrove said. “But there’s also this, ‘Oh, did you see the update today?’ And then people come together.”

As with any business venture, however, Campus Pursuit will fall flat without people behind it. This isn’t to say its debut was anything short of promising. In addition, Wisotsky and Avraham can report that over 130 students have registered for the college campus since its launch on the app.

Astrove, who hid the very first prizes, is unabashed expressing her excitement about these results, even so early in the program’s life cycle on the college’s campus. She said, those first “found” notifications, which came only an hour after she hid the prizes, were both gratifying and thrilling for her.

“When I saw the first person had found a prize, I was like, ‘Oh my god, somebody actually saw what I did,’” Astrove said.

And so Astrove will continue sneaking around campus, leaving prizes and maybe some joy in her wake. It’s ultimately this campus-wide joy that Wisotsky and Avraham want to create — a joy for not only the thrill of hidden prizes, but one for the local businesses that Ithaca offers.

“We want to bring happiness to students, we want to put smiles on their faces every day,” Wisotsky said. “And we also want to help the local economies here within the college towns grow. If a city doesn’t have a treasure hunt in it, that’s a dull city.”