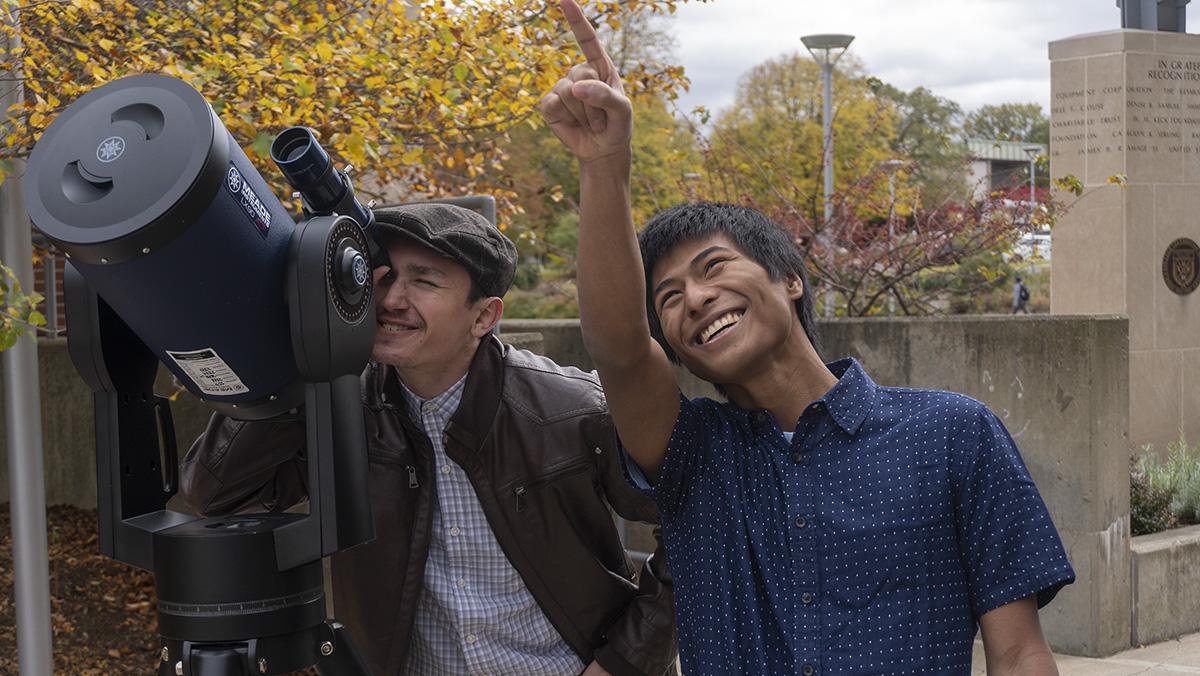 Photo illustration by Ray Milburn
From left, juniors Mikolaj Konieczny and Wesley Czubryt-Ogino use a telescope to look into the sky. The revitalized astronomy club is aiming to bring more students from all academic backgrounds.
By Elizabeth Kharabadze — Co Life and Culture Editor
Published: November 2, 2022

Looking up into the dark night sky, one might be greeted by dozens of twinkling little stars and galaxies lightyears away from Ithaca. Yet the Ithaca College astronomy club aims to bring these celestial bodies just a little bit closer to home.

The astronomy club’s goal this fall semester is to diversify its members by making astronomy more accessible for non-STEM (science, technology, engineering and mathematics) majors. Junior Mikolaj Konieczny, president of the astronomy club, said that in the past, the club was mostly geared toward physics majors. However, following the club’s inactivity as a result of the COVID-19 pandemic, Konieczny said he wanted to revitalize the club and gain more interest.

“We’re trying to make sense of it all,” Konieczny said. “The night sky is not just a bunch of random dots. … [We want to] make it more accessible [and] really educate and inspire people.”

Members of the club are encouraged to get together and partake in skywatching, an act of observing the night sky for celestial bodies. During a past meeting, members of the club gathered at the recently reopened Ford Observatory, where students were able to observe Jupiter, Saturn and Albireo, the second brightest star in the constellation Cygnus the Swan. First-year student Suryash Malviya, secretary of the astronomy club, said there was a curious sensation as participants took turns observing the night sky.

“I felt that excitement around me during our last event at the Ford Observatory,” Malviya said. “Even though it was pitch dark there, I could feel the sensation of curiosity in the voices around me. Everyone loves the craters on the moon, the rings of Saturn, the spiral galaxies or the giant star systems, because we grow up looking at the sky, and in my opinion, it does not matter if you are a physics major or not. What matters is your will to learn what bigger thing you are a part of.”

As a television and digital media production major, junior Wesley Czubryt-Ogino, treasurer of the astronomy club, said he valued the club’s new emphasis on engaging students from all academic backgrounds. Czubryt-Ogino’s own love of the stars came from YouTube space documentaries he said he spent hours watching.

“We might all come from different backgrounds, but we’re all interested in … space, and we’d like to talk about it,” Czubryt-Ogino said. “We not might not be space fanatics, but we love space and we like to talk about it. … And it’s sort of the environment that we want to foster.”

Malviya said that the club also plans to host informational events that bring together club members and professors in the physics department to further facilitate conversations surrounding astronomy.

“STEM is just a way we choose to define one of the carrier philosophies,” Malviya said. “The fundamentals of the universe are beyond any human philosophy out there. So, do not be hesitant to participate in something [that] is your heritage.”

Along with the curiosity of learning about galaxies far, far away, Konieczny said there is a healing element to looking up into the night sky. Konieczny said he feels that just looking up at the night sky can help alleviate some of that stress. Stargazing and spending time outdoors can increase awe in the universe, which in turn can lead to increased creativity, generosity and reduced stress.

“Sometimes work can be very difficult, especially for Ithaca College students because I know a lot of people are struggling with anxiety and other things [with] work piling up on top of that,” Konieczny said. “[Space can detract from that stress]. Take a break and rethink your perspective. Looking at the stars really helps put your mind at ease. It’s not only relaxing, it’s also fun and helps you destress as well.”

Regardless of how familiar one is with astronomy, Malviya said that engaging in conversation about the stars can give people greater insights and help foster connection.

“We are just creating a small medium to help people see what they have inherited,” Malviya said. “The stars, no one owns them, they are these complex systems that we are still trying to figure out, but they are the legacy of billions of years which we are lucky enough to safely witness. I think no one should miss the opportunity to do that in life.”

Czubryt-Ogino similarly said that, at the end of the day, the club mainly functions as a mediator to the stars and actively encourages students to make their own observations.