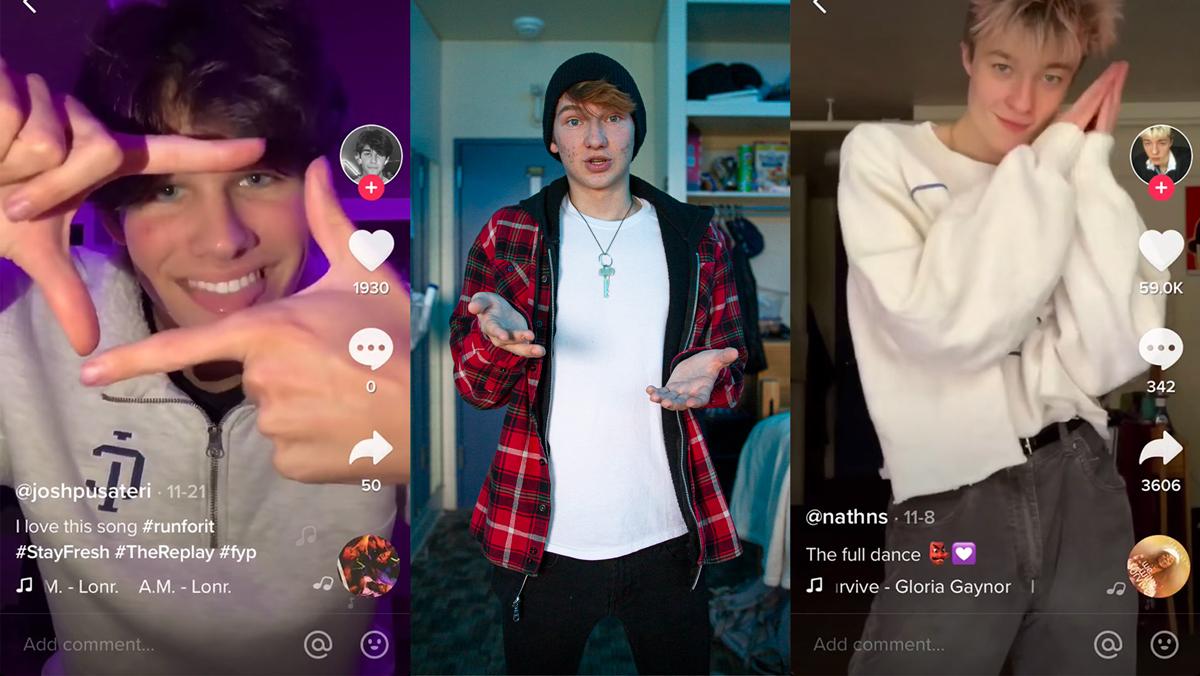 With each college class, a new social media platform seems to take over. In 2004, Facebook, emerged, and in 2006, young people were captivated by Twitter. Students flocked to Instagram in 2010. And now, in 2019, college students have TikTok.

When someone opens TikTok, they are greeted by thousands of videos that show users dancing to catchy songs, cracking jokes and attracting viewers. The app’s content consists of only videos that can be up to a minute long in which users usually lip–sync to songs and spoken audios. The videos are unique to TikTok because of the specific editing tools and music samples that TikTok offers.

Creators can be found all over the world, including at Ithaca College. The app’s demographic ranges from all ages, but approximately 25% of its viewers are age 18–24. Some Ithaca College students have gained thousands of followers, including freshman Brett Sullivan, who received almost 600,000 views on one of his videos after it made its way to the “For You” page.

The “For You” page is one of the most recognizable features of the app and is similar to the explore page on Instagram. If a user’s video ends up on the “For You” page, there is a greater chance of that video gaining a higher number of views and likes and then going viral.

The video that led to Sullivan’s overnight fame features him between two friends, dancing to a sped–up version of “If You’re Happy and You Know it Clap Your Hands.” Instead of clapping his hands, Sullivan slaps the butts of his two friends.

“It was just me and my friends doing some stupid stuff, but it was definitely cool how it blew up,” Sullivan said. “I had maybe 100 followers, and then I posted a video, … and then all of a sudden, I was getting 6k followers, and then eventually plateau out. It was kind of just a big boom after I posted that video. ”

After his friend’s convinced him to use the app, Sullivan started posting on TikTok in August before he arrived on campus for the beginning of the semester. Even though he has only been posting on TikTok regularly for a few months, the unexpected traffic from his video boosted him to over 30,000 followers.

Despite his large number of followers, Sullivan said he does not consider himself famous. He said that he is just a normal guy with a lot of followers, and his fans do not make him different than anyone else.

Sophomore Nathan Smith, another Ithaca College TikTok star, has even more followers. Smith started actively posting on the app before TikTok’s spike in mainstream popularity in 2018 when the app hit No. 1 in the iOS App Store.

Unlike Sullivan, who had a rapid increase in followers, Smith said his increase in fans has been slow and steady over the past year. Each video he posts slowly impacts the amount of views and followers he receives, and, he said, he works hard to create content.

“The content that I post is very much me, or at least some aspect of me,” Smith said. “I put most of my time and effort into my videos. I really care about what I post and the quality of the content I post.”

Smith is known for creating his own dances and experimenting to create new trends and stand-out videos. Dances are a large part of TikTok and are usually what makes up most videos on the app, Smith said. When looking through the app, the most frequent videos to pop up are ones that include a catchy song paired with a dance or small skit. Dances like the one that goes to the “Spooky Scary Skeleton” remix, a dance created by user Minecrafter2011 that has over 149,000,000 posts under its hashtag, blow up on the app and resonate positively with viewers.

Even though there is a high volume of dance trends and skits, the app is open for all kinds of creative expression and allows the creators to have creative license over their content, as long as it exists within the app’s rules and safety regulations.

Yvette Sterbenk, assistant professor in the Department of Strategic Communication, who teaches a course that covers social media analysis, said TikTok is designed to appeal to younger audiences. She said this allows young people to express themselves in an environment they are comfortable in without too much intervention from adults.

“Social media started out for college students,” Sterbenk said. “Facebook … was a young person’s platform for … a while, and, over time, people of all ages got onto social media, and so younger people look for ways to sort of find their own platforms. … It’s just an evolution of a younger population looking for a platform that their parents aren’t on.”

Smith said that the freedom and diversity of the platform allows for all different types of people to enjoy and use the app however they want and that this element is one of the reasons he loves TikTok. Although there are countless dance videos to choose from, there is a piece of content for everyone on the app.

A popular trend on the app shows users flexing their creative muscles by painting random objects or places in their houses, said freshman TikTok user Gianna Nigro. These artists have adorned all kinds of items with colorful murals, from calculators and phone cases to bedroom walls. The hashtag “art challenges” has over 800 million posts under it.

“I have seen a lot of people who haven’t been given the credit they deserve for all of the work they put into their art, and it’s really great to see they’re getting the attention they deserve and it’s all because of this small app,” Nigro said.

Sterbenk said that besides TikTok fostering creative expression in young people, it has also created a new way to market oneself and establish brand identity. She said that in the past, artists and businesses had to promote their brands through indirect means like commercials and newspaper ads with no guarantee consumers would see or be interested in the advertisements. She said that through the emergence of social media and, specifically, TikTok, people have an easier time promoting themselves to a wider audience.

“[In my class], we study how to use social media to get your brand out there,” Sterbenk said. “Certainly it offers ways to do that, that we didn’t have before and ways to reach audiences directly that we didn’t have before. We hoped they would watch our advertising if we put it in the right spot. We hoped they would read a good article about us, but we had to rely on journalists to tell the story for us.”

Smith said TikTok is a way for him to promote himself and pursue his musical career aspirations. Each video of Smith is viewed by at least 20,000 people. Each view he gets is an opportunity for him to develop his brand, he said. Smith said that he has an interest in fashion and drawing and that he wants to create a distinctive brand for himself that he can incorporate into his content. He created a dance to one of his original mixes of “1997 Diana” by BROCKHAMPTON to promote his music to his fans and the public.

With 37 followers, Nigro does not have a large follower count, but she said she still enjoys making videos for herself and her friends and watching them in her free time. Her feed is largely made up of trendy dance videos that she learns.

Like Nigro, Sullivan said he enjoys the app for its simplicity and how he can do whatever he feels creatively inclined to do.

“Since TikTok isn’t really that much of a priority for me, my amount of followers doesn’t motivate me to put out more content, and I don’t have a follower count that I’m reaching for,” Sullivan said. “I’m just kind of having fun with it.”