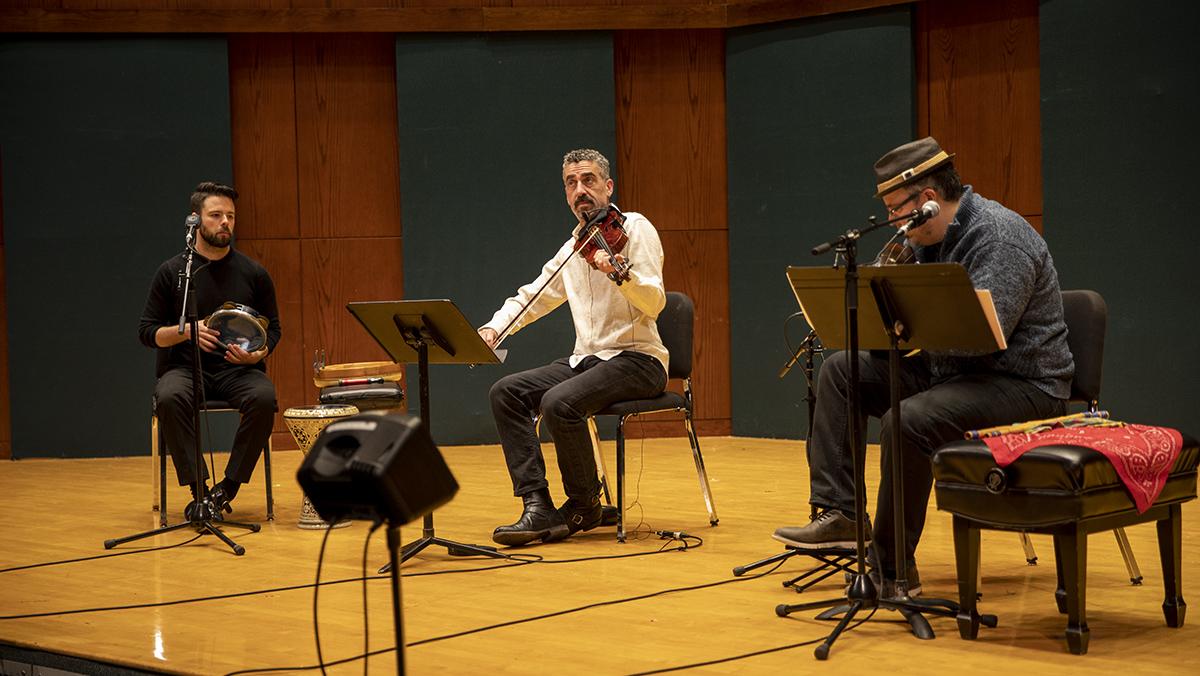 The lights dim in the Hockett Family Recital Hall, indicating that the performance is about to begin. Samuel Tjorman Thomas picks up a eleven-string, oval-shaped instrument called an oud. A rich, vibrating tone fills the room with a transcendental energy. Accompanied by the sweet tones of violin and grounding beats of the tambourine, the audience was soon transported to the world of Mediterranean soundscapes.

On April 10, the Ithaca College School of Music, in collaboration with the Department of Jewish Studies, hosted the concert Mediterranean Encounters: Judeo-Islamic Soundscapes. The performance was a musical treasury of songs in Hebrew, Arabic, Spanish and Ladino. Tjorman Thomas, a multi-instrumentalist, founder and artistic director of AsefaMusic and professor of ethnomusicology and Sephardic Jewish studies at City University of New York, assumed the role of vocals; oud, which is a fretless eleven-string that is a predecessor to the lute; and the nay, which is a bamboo flute significant throughout the Middle East and North Africa.

Working alongside Tjorman Thomas was Jeremy Brown, violinist and central figure on New York’s Jewish music scene, and Jeremy Smith, a percussionist whose foundation of playing comes from his classical training at The Juilliard School.

Tjorman Thomas attended the Berklee College of Music where he studied jazz competition and saxophone performance. Tjorman Thomas said he became interested in finding the deeper meaning behind music, which led him to the field of ethnomusicology: the study of music from the cultural and social aspects of the people who make it. Tjorman Thomas said that the Judeo-Islamic Soundscape performance illustrated the connectivity between Jewish and Islamic cultures through the use of Arabic and Hebrew language throughout the Mediterranean.

“The Judeo-Islamic element is the vast majority of the history of that region,” Tjorman Thomas said. “So the relationship between Jewish and Islamic societies is quite synergistic.”

Tjorman Thomas said he wants to raise awareness regarding the relationship between Jewish faith from the Middle East and North African cultures and teach the audience about the music’s roots.

“When people think of Jews and Muslims, they are thinking about some [conflicted] narrative, as if that’s all it’s about,” Tjorman Thomas said. “But that is not the greater story. The music tells a greater story of the relationship between these groups.”

Peter Silberman, associate professor and chair in the Department of Music Theory, History, and Composition and a member of the Jewish Studies committee, helped organize this performance. Silberman said he is excited to hear the music because it is a great way to bridge the gap between people of different backgrounds.

“No matter who you are, everybody likes music,” Silberman said. “Everybody responds … even if you don’t understand it.”

Before the concert, Tjorman Thomas gave a talk at 7 p.m., preceding the performance set to take place at 8 p.m. Thomas decided to start off with a little music and then he would “unpack it from there.” He began to strum away at the oud, with the concert hall being filled with a warm acoustic melody. Then, Brown jumped in with the violin a few beats later, the chords flowing seamlessly between octaves. Smith accompanied the music with a soft tempo on the tambourine. A few measures in, Tjorman Thomas began to sing in both Hebrew and Arabic.

The audience of about 50 people was a wide array of professors, alumni, students and members of the Ithaca community. Each head was glued to the stage, taking in the rich melodies.

After playing this snippet, Tjorman Thomas described the music performance as something that belongs in the world of makan, which, in Arabic, means “place.” The octaves Tjorman Thomas plays in tend to shift throughout what he refers to as a musical neighborhood. Smith said a great deal of their music is improvised, and a lot of his playing has more to do with listening.

To explain the heavy and light stroke beat pattern of the music, Tjorman Thomas had the audience members clap their hands in a cupping motion to demonstrate the heavy stroke and then clap their fingers on the base of their palm to show the light stroke. Brown played different beats on the tambourine while the audience clapped along. The amplification of the claps, beat and addition of Smith’s violin produced an energy of excitement, setting the tone for the concert itself.

Alexei Aceto ’21 saw the concert on the college’s concert calendar and said he saw it as an incredible opportunity.

“I firmly believe, as a musician, that one should approach music performance with an understanding of music of different cultures,” Aceto said. “It enables you to communicate better with others.”

This appreciation and acceptance of different cultures coexisting is something Tjorman Thomas hoped students would take away from the performance.

“Hopefully they’ll have an ‘aha’ moment about humanity at large,” Tjorman Thomas said. “And what more there is to gain from knowing each other than there is from battling each other.”