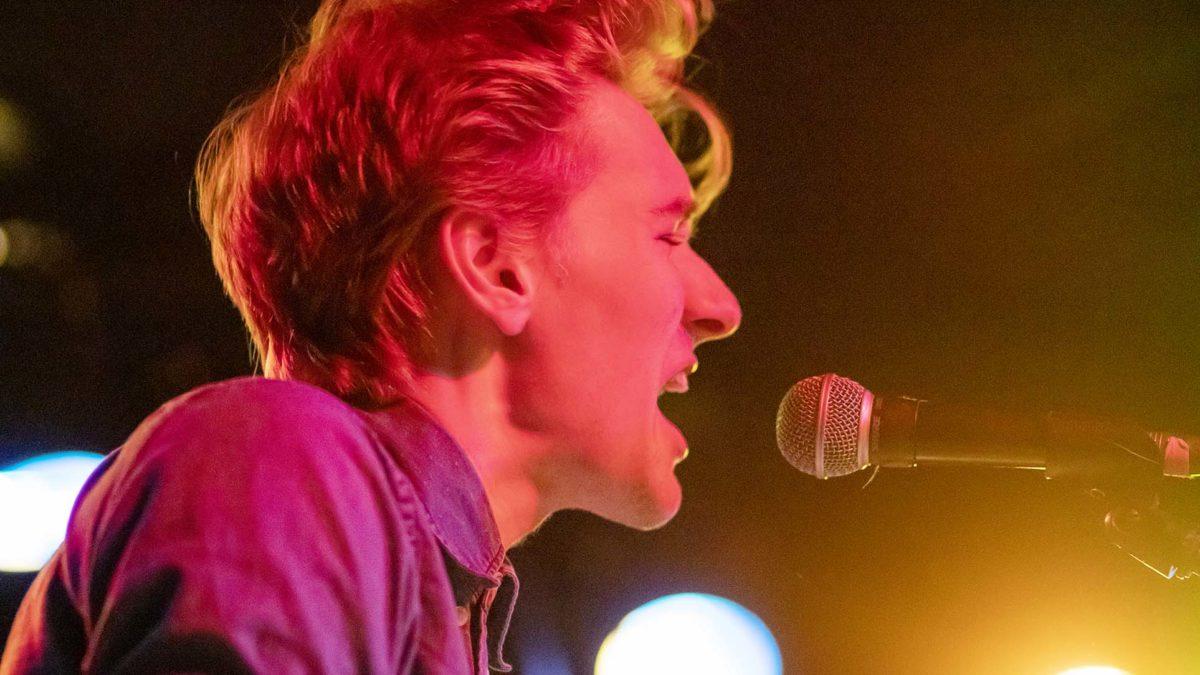 The dimly lit dance floor at The Haunt slowly filled with students as 8 p.m. inched closer. Some people gathered at the bar, and others grouped together at the edges of the floor, waiting for the first Ithaca College student to step onstage. As the first musician from the college started to play under the multicolored lights, attendees started dancing and swaying to the music.

With finals right around the corner, a crowd of students from the college took a break from studying Dec. 8 to come support their peers at the 2019 Ithaca College Showcase. Musicians from the college performed their music at The Haunt, taking the same stage that big-name artists like the Dead Kennedys and the Red Hot Chili Peppers have before them.

When Ithaca College junior Eddy Crowley stepped onto the stage with his saxophone during the showcase, it was not his first time performing at The Haunt. On Nov. 8, Crowley had opened for Boston septet Juice with the exact same setlist.

“Having done it once, I feel like I’m even more comfortable,” he said. “I usually get kind of nervous. I’m relatively confident, but there’s always a little bit of nervousness, like what if I forget something or mess up? But that definitely gets easier, especially playing at the same place with the same songs.”

Crowley performed under his stage name Teddy Hyde and shared the stage with other bands and solo artists from the college. The lineup included Siamese Bikes, Ivy. and Quail. Every semester since Fall 2017, Dan Smalls Presents (DSP) Shows has hosted a showcase featuring Ithaca College musicians. 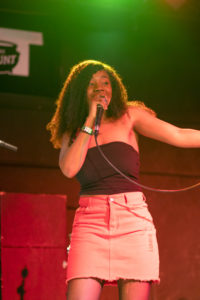 Graduate student Trina McGhee was the emcee of the student showcase.

This semester, the showcase was held in collaboration with Lynx Entertainment, a company created and run by graduate students and faculty in the college’s new entertainment and media management MBA program.

Junior DSP intern Maddie Guerrier said the graduate students in the MBA program were heavily involved in planning the showcase. She said they worked on designing the posters, promoting the event via social media and other marketing initiatives.

Guerrier said that in previous years, there was more of a traditional audition process for the show in which interested students would submit tapes to DSP. This year, she said, DSP interns contacted all the acts in the showcase to see if they would be interested.

Determining a date for the showcase was difficult, Guerrier said.

“Because DSP is currently growing in size, … The Haunt had been booked out pretty far into and through December, so finding a good time for the show to actually happen was the first step,” she said.

The next act was Siamese Bikes. Siamese Bikes is the primary music project of senior Colin Boyd. The self-titled EP was released in October, and Boyd now performs with seniors Sam Unger and Pat King. Boyd was on lead vocals and guitar, King played bass and Unger played drums.

Siamese Bikes performed all the tracks from its EP. The songs all had a cohesive, eclectic pop sound, though the group’s first song had a more folk-influenced sound.

Crowley then followed Siamese Bikes, accompanied by his band, juniors Connor Moses on bass, Peter Van Houten on guitar and Andrew Lackland on drums. Crowley almost immediately began engaging with the audience, starting off with some sort of bird call.

“We’re going to open up with a song about sex,” he said.

He then began playing “Sex with a Ghost,” a track off his debut 2018 album, “Sock-Footed.” The album is experimental in genre, but it mostly has an indie pop sound with jazz influences, Crowley said. He said he enjoys performing live because it gives him the opportunity to try new things as well as connect with the crowd.

Crowley radiated energy throughout his performance, swaying while he sang emotively. The audience fed off this liveliness and danced and sang along with him. Between each track, he bantered with the audience, yelling out funny one-liners and laughing with the crowd.

“I really like to try to be human on stage, like really interact with the audience and kind of get personal or be personable because I think that’s kind of the purpose of a live show,” Crowley said. “If you wanted to hear the perfect version of my song without any changes or mistakes or interruptions, then you’d just listen to it.” 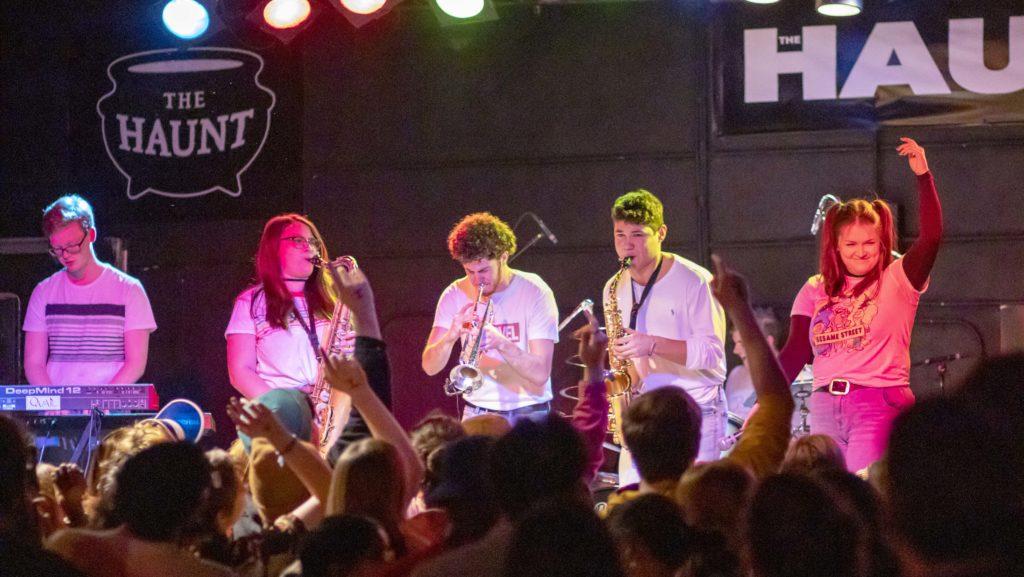 Quail, a funk R&B band, was the final set of the showcase. This marks the band’s third performance at The Haunt.

Young said this was Quail’s third time performing at The Haunt. Last year, she said that it performed at the Planned Parenthood Showcase and opened for the band The Commonheart.

The band members enjoy playing at The Haunt because it is a great, professional setting, Young said. She also said that because a lot of the band’s fan base is made up of music students, the showcase provided the chance to gain new fans.

“It’s a good opportunity to get to play with bands that we don’t normally play with and reach a new crowd of people,” Yapp said.

Quail performed several upbeat, jazzy songs, including a cover of Stevie Wonder’s “I Wish.” The audience was especially energized and active during Quail’s performance of its new single, “Blue Sky.” Twice during the song, almost all the band members crouched onstage while they continued to play, then leaped up during climactic, high-energy moments. The crowd followed suit, squatting near the floor while still grooving and then jumping up and dancing along.

Young said this was its first performance since the release of “Blue Sky.”

“We started that song, and usually people kind of know the horn line to it, and we have them sing it, but we started playing it and people knew the first lyrics,” she said.

Junior Lily Dearworth attended the showcase, and she said she’d seen every act before, except Quail.

“I really loved the energy that Quail brought,” Dearworth said.

For most of the show, there was a large group of people on the floor enjoying the music. By the end of the showcase, those that were still there were right by the stage, as close as they could be to Quail, dancing energetically.

“[The show] was filled with love and also … a lot of community,” sophomore Teagen Parker, a member of the audience, said. “I feel a lot closer to the people that were here that played and also the people that are here to support.”