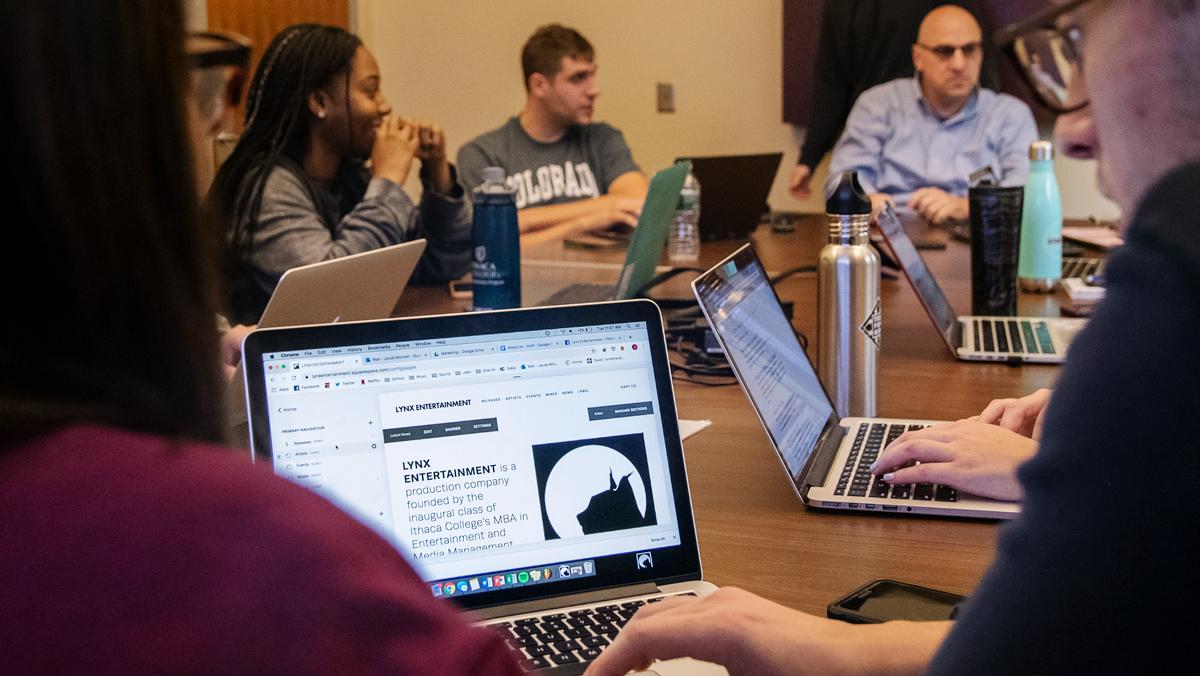 Kristen Harrison/The Ithacan
Students convene for their weekly Lynx Entertainment production meeting Oct. 22 in the Ithaca College School of Business. They work on setting up their company and website under the guidance of Phil Blackman, assistant professor in the Department of Accounting and Business Law.
By Emily Hung — Staff Writer
Published: October 23, 2019

Lynx Entertainment, a company created by Ithaca College graduate students and faculty members in the inaugural Entertainment and Media Management Master of Business Administration (MBA) program, is looking to sign its first artist.

Fourteen students are working on the company, including two students who did not attend the college for their undergraduate degrees. Phil Blackman, assistant professor in the Department of Accounting and Business Law and director of the MBA program, and Johnine McCartney, assistant professor in the Department of Marketing, assist the students as they develop Lynx Entertainment.

The company is looking to record and mix an artist’s music at Pyramid Sound Studios and distribute it to major labels, managers and publishing companies. The artist must be 18 years old or older.

Graduate student Alisar Awwad helped launch the company at the beginning of Fall 2019 and said the company is looking for artists in any area of music production, whether it is singing, songwriting or playing instruments. Interested individuals and groups can sign up here.

“Our goal as Lynx Entertainment is to elevate artists and to respect their identity and work,” Awwad said. “You don’t have to have a million followers for us to find you, but we look for someone that we can provide a platform for and help them shine.”

Blackman said the company was created as part of the experiential component of the 10-month MBA program. The program is based on three pillars: traveling and networking, experiential learning and doctrinal classes.

“I make sure that all our goals are met, our timelines are met, and I work to make sure that the company runs smoothly,” he said. “But I do defer to the students a great deal first. Then I help guide them on kind of what decision-making they have or where they end up.”

In addition to developing an artist, the students are working on other projects for the company.

Blackman said one project includes signing a number of artists who have finished products to help with distribution, marketing and promotion.

For another project, it is collaborating with DSP Shows, an Ithaca-based concert promotion company, and it was able to be involved in planning the Bob Dylan concert, which will occur Nov. 17 at the Athletics and Events Center. It is also working on an artist showcase and concerts at The Haunt and the State Theatre of Ithaca.

“We would spend a day and follow an artist who is touring through Ithaca or starting their tour,” Fowler said. “We would see them rehearse, get ready for the show and chat with them about what it’s like to be on the road. It’ll also include footage of their performance at the State Theatre.”

Blackman said the company will create short promotional videos for television and film and produce television show and movie ideas pitched by students.

He said alumni are playing crucial roles in the startup of Lynx Entertainment by serving as guest speakers. Blackman said he also works with the deans from the Park School, School of Business, School of Music and college President Shirley M. Collado to develop philanthropic support for the program.

“Working with alumni is tremendous,” he said. “The people who have come out of the woodwork — I’m talking to people from FOX, CBS and Netflix — are willing to help us. Even current parents are willing to jump in who have very successful careers in the entertainment and media industry.”

Awwad said she wants to start her own production company after graduation to emphasize diversity and tell different stories.

“In an era where we’re just rebooting and remaking different movies and TV shows, it’s really boring and restricting to different groups of people who don’t necessarily fit the status quo that once was,” she said.

She said she hopes to use the skills she acquires in the program to work in a managerial role.

“I want to be an advocate for myself and everybody else who are artists,” Awwad said. “Especially those who are systematically oppressed have not had the same opportunity or kind of believe that the first offer they get is the last offer that they’ll have.”

Correction: A previous version of this article stated that Lynx Entertainment is a limited liability company. It is not yet a limited liability company. Additionally, the article stated that Phil Blackman, assistant professor in the Department of Accounting and Business Law and director of the MBA program, is the CEO of Lynx Entertainment. He is not the CEO of Lynx entertainment. Additionally, the article stated that Blackman works with college President Shirley M. Collado and  deans from the Park School, School of Business, School of Music to collaborate on projects. He works with them to develop philanthropic support for the program. The article has been corrected.