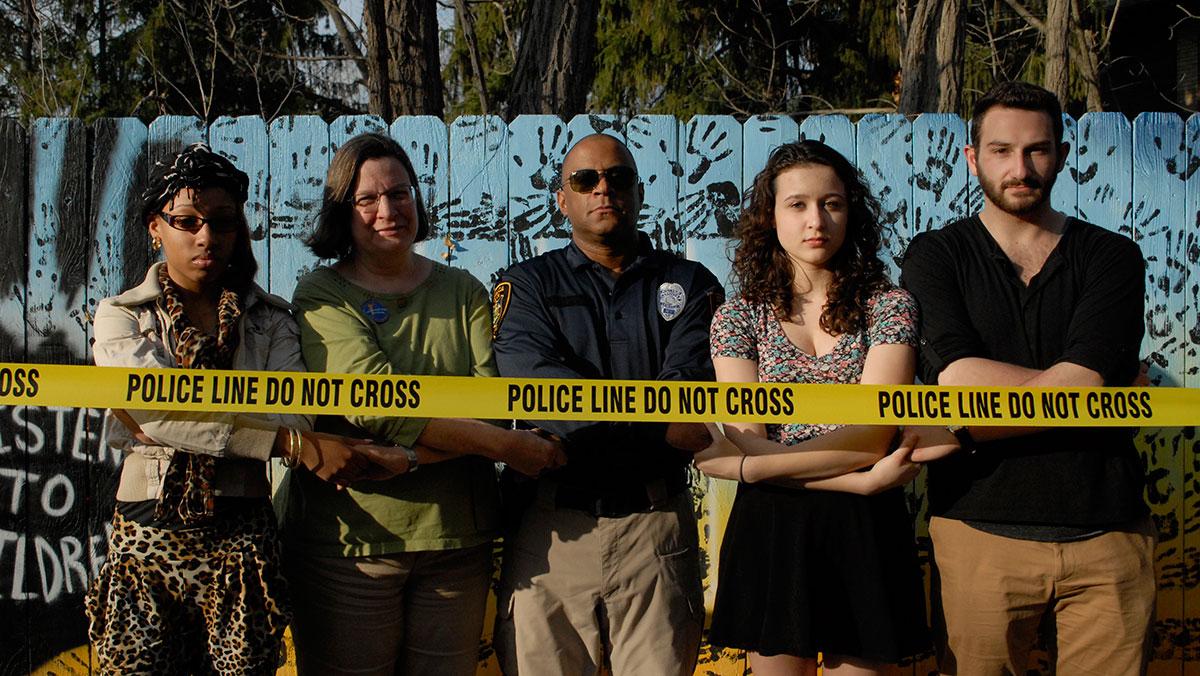 Madi Van Dam/Performing Arts for Social Change
Ithaca College students and members of the Ithaca community came together to write and produce “Trust,” a play about police-community interactions, to be performed at 4 p.m. May 9 in the Clark Theatre in Dillingham Center.
By Ashley Wolf — Staff Writer
Published: April 29, 2015

After several controversial police interactions with civilians over the past year, discussions of police-community relationships have become more and more prevalent both in everyday small talk and on social media. To give their own take on this constant dialogue, the Performing Arts for Social Change, a local performance organization comprised of many members of the Ithaca community including students and faculty from Ithaca College, converted their discussions into a new devised piece called “Trust.”

“Trust” is based on many open discussions of police-community relations both in Ithaca and throughout the nation. The play was written by Saviana Stanescu, assistant professor in the Department of Theater Arts, after many open discussions among the show’s cast and crew regarding police interactions with the community. The work will be performed at 4 p.m. May 9 in the Clark Theatre in the college’s Dillingham Center.

Cynthia Henderson, associate professor in the Department of Theatre Arts, is the founder of PASC. She said this play is not one story from start to finish. Instead, it is an episodic production, meaning it will cover multiple stories. For the play, about 30 different interviews and stories were collected, and many of them were incorporated into the script by Stanescu, Henderson said. Many different perspectives and stories will be shared, including stories of officers who do not have good intentions and people who are afraid to call the police even after they have been mugged, Henderson said.

“What you’re going to see are people who are speaking words that are not necessarily their own,” Henderson said. “Some of the people in the cast did share stories, but they’re not even necessarily sharing their own stories. Somebody else in the class may be sharing their stories by the way we put it together.”

“Trust” is part of a larger exploration of this topic called “Establishing Trust,” which was conceived in 2014 in response to police brutality issues, especially the death of Michael Brown in Ferguson, Missouri in August 2014. Kylie Adams, executive assistant for PASC, said this organization educates the public through performance pieces about important societal issues. “Trust” is about policemen and civilians coming together to try to understand one another and realize that, regardless of career, everyone is human and makes mistakes, Adams said.

Cast member Oghenero Gbaje, a sophomore acting major at the college, said he finds it interesting to work with people who are not used to the theater world. He said the news is only covering some of what is happening with police and civilian relationships. The cast is made up of high schoolers, college students and adults, involving people from a range of different professions. This variation helps the production become more interesting and enriches the value of the play’s message, he said.

“I have a pretty heavy theater background, but being in a production with people who don’t necessarily have a theater [background] is nice,” he said. “It’s cool to see people break out of their shells.”

Cast member Officer J.B. Nelson was born and raised in Ithaca and has been an Ithaca policeman for about 16 years. He said it is unfortunate that the media has been recently portraying policemen as the villains and bullies of the country.

Many people flinch when a police officer is near them on the road, or they get nervous around police even when they know that they are not out to arrest them, Henderson said. “Trust” aims to break down these barriers of fear by humanizing the officers and getting their perspective.

Gbaje said the play is worth seeing because it will give people a better understanding of the life of a policeman.

“I want to have faith in the police department, but it’s scary sometimes,” he said. “Somebody can get shot just walking down the street. That’s something that we talk about a lot in the show.”

Tickets to the performance are free, but Henderson said a donation of five dollars or more is encouraged in order for PASC to facilitate future workshops and projects. Henderson said she would also like to give honorariums to the businesses that have donated rehearsal space for the production: Acting Out NY and the Suicide Prevention and Crisis Center. After the performance, there will be a talk-back with the cast and the audience, she said.