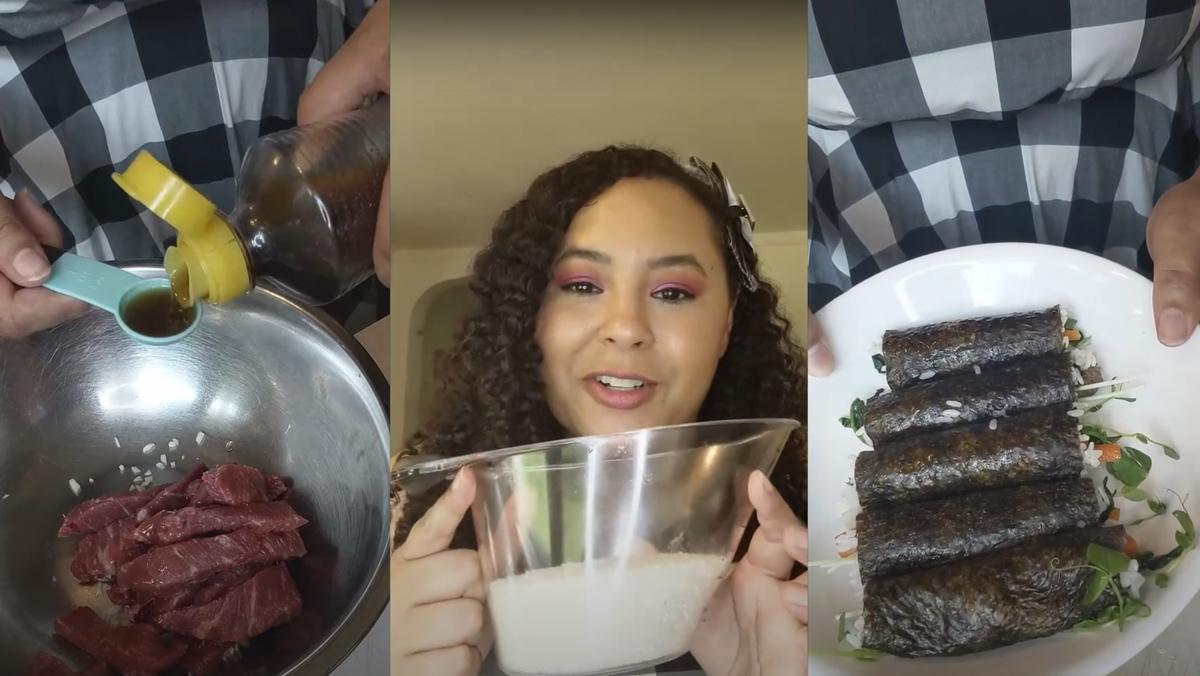 Courtesy of IC Virtual Events on Youtube
“Cook Like an Ithacan” was a YouTube series created to connect the Ithaca College community to campus while away for the semester. The first episode of the series features Omega Hollies, assistant director of the Center for Inclusion, Diversity, Equity and Social Change (IDEAS), making kimbap, a rice and seaweed Korean dish.
By Arleigh Rodgers — Life & Culture Editor
Published: September 8, 2020

Omega Hollies, assistant director of Ithaca College’s Center for Inclusion, Diversity, Equity and Social Change (IDEAS), speaks candidly to a camera in the first of three episodes of “Cook Like an Ithacan.” While she chops vegetables and steams a pot of rice, she details her favorite dish, kimbap, a rice and seaweed Korean roll that she said reminded her of summer.

In April, the Division of Student Affairs and Campus Life formed committees to engage with members of the college community and connect them to campus from home after the college moved classes online. “Cook Like an Ithacan,” a video series Hollies worked on with Luca Maurer — director of the Center for LGBT Education, Outreach and Services — and Sean Reilley — program coordinator for the Office of Recreational Sports — was organized for those who wanted to share their much-loved or nostalgic summer meals during quarantine, Hollies said.

Submissions for the web series opened in June to anyone interested in making a video. The series was created to continue as long as there were people interested, and Hollies said the release date for every video depends on when it was submitted and how often chefs submit them. The series ended in August after a video from Chun Li, laboratory instrument coordinator in the Department of Chemistry, was posted. Hollies and Maurer also made videos, and all of them were posted every few weeks on the IC Virtual Events YouTube page.

“We wanted to open up the opportunity for community members to think a little bit about something that is pretty close to most people’s hearts, which is food,” Hollies said.

While working as a college administrator in Pudong, a suburb outside Seoul, South Korea, from 2009 to 2010 and 2012 to 2013, Hollies said that she quickly affiliated kimbap as a cheap summer snack and diet staple. Although similar to sushi, a meal that originates from Japan, kimbap usually is composed of cooked ingredients like vegetables, meat or fish. However, Hollies said the dish is highly customizable, allowing for different ingredients based on a person’s preferences.

Hollies said she did not want an overproduced or flashy Food Network–⁠style series and instead based “Cook Like an Ithacan” on submissions from the college’s community.

Hollies said the trio behind “Cook Like an Ithacan” took inspiration from Julia Child’s cooking shows and their playful, genuine feeling, during which Child would sometimes make mistakes or a mess of her kitchen.

“We’re not asking folks to make a big show of it or to be something that they’re not,” Hollies said. “If you cook with your kids, show us how you’re cooking with your kids. Maybe it means that you’re making a big mess with flour … whatever it is to give the idea that we’re still a community that has real people, and we each are trying to feed ourselves.”

The team behind “Cook Like an Ithacan” requested unedited videos because it did not want interested chefs to turn away if they lacked the editing software or skills to produce a manicured video, Hollies said. As a result, she honed the skill herself and used DaVinci Resolve, a free editing software, to edit the videos. Hollies’ own no-frills video features long takes of her cutting vegetables and assembling a beef kimbap in her kitchen.

On the other hand, Maurer takes viewers outside to collect herbs from his home garden before making bruschetta and caprese salad with local ingredients. Maurer said the connection between food and the LGBTQ community through communal events like potlucks spoke to him immediately.

Potlucks, based in grieving, often transformed participants into a tightly bonded family, tied together by the food and experiences they shared, Maurer said. As a college student, Maurer would celebrate holidays with other LGBTQ community members when they had nowhere else to go. Gatherings based on sharing or cooking food together were essential to his survival while facing food and housing insecurity, he said, and communal food additionally sustained him when members of the LGBTQ community who he knew died from AIDS.

“Giving what we have to others and receiving what others have to give to us has been a really important part of LGBTQ communities for decades,” he said. “[Potlucks] really reminded us of our resilience and our resourcefulness, and so, again, even in times when there wasn’t a lot of … food to share, the idea that we could come together and share it was very nourishing for our bodies and for our souls.”

Li said that to her, food is both essential to the survival of human beings as well as to cultures, knowledge and memories. Her recipe for egg fried tomatoes — the first dish she cooked for herself when her parents were both working — features home garden-grown heirloom tomatoes. She relays her tips for cutting the tomatoes and testing the heat of the pan in her kitchen, accompanied by soft, acoustic background music.

After it was published, Li shared her video with friends and family, some of whom she said enjoyed the video and intended to try the recipe. She said that if she were to make another video, if the series were to start again, she would bring her chemistry expertise to the kitchen and craft a dish with a chemistry twist to it.

“As a chemist, I always tend to relate food with chemistry,” she said via email. “[The recipe] is very simple. … ​I figured that many people around [the] Ithaca area probably are having the same situation like me and are exploring different recipes for tomatoes.”

Maurer said he would also like to see the video series continue, if viable, because virtual engagement initiatives like “Cook Like an Ithacan” also benefit people with disabilities. Whereas an in-person event may present hurdles in accessibility, series like this can be accessed from home — something Maurer said that he thinks should continue beyond the pandemic despite past objections to moving events virtually.

“I do think that this is a way that we can reach lots and lots of people who otherwise in the past … the world has said, ‘Oh, too bad,’” he said. “I hope that this informs what we do going forward.”

Challah for Hunger bakes bread and takes action against hunger