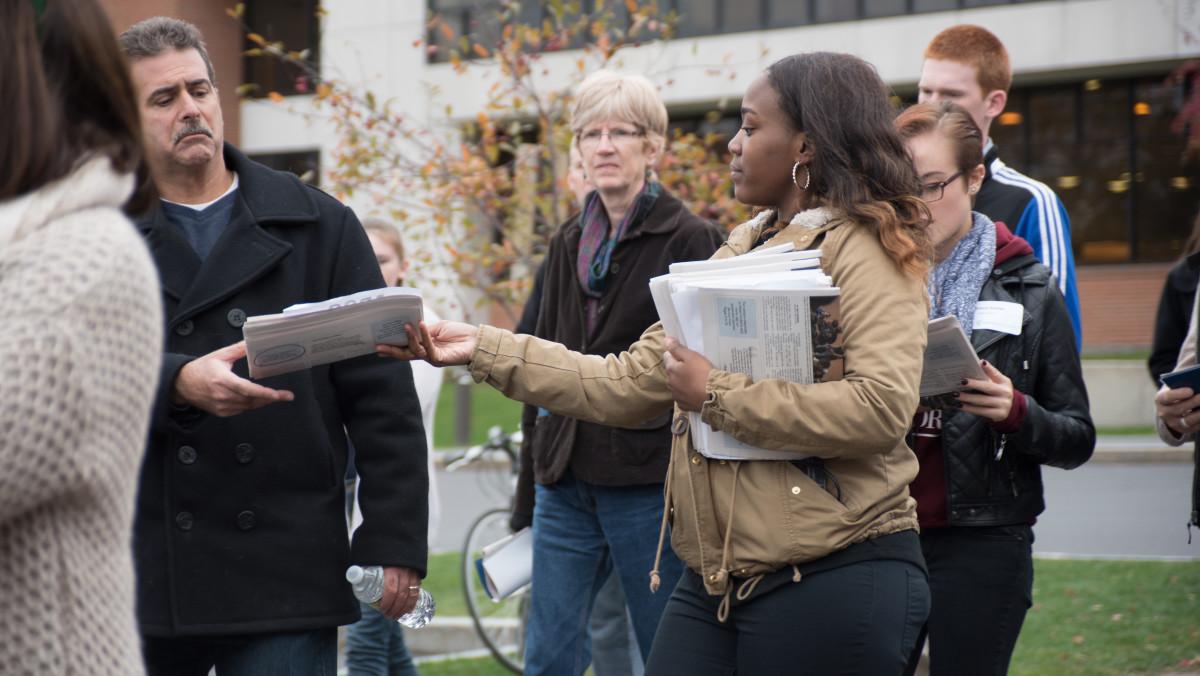 Amanda Den Hartog/The Ithacan
Students hand out copies of The Ithacan to prospective students and families during the fall 2015 protests at Ithaca College. Many students have mixed feelings about diversity on campus after transitioning to college from more diverse locations.
By Justin Henry — Staff Writer
Published: March 9, 2016

During one of Ithaca College’s fall Open House events for prospective students, student protesters handed out editions of The Ithacan with the headlines “Students protest racial climate, express no confidence in Rochon” and “Racial remark clouds Blue Sky event” circled in an effort to bring the true racial turmoil on campus to light.

“Do you like it here?” one guest asked a protester.

The protester responded by saying the African, Latino, Asian and Native American groups on campus were close but that they believed the president didn’t have true regard for them as a community.

“It’s no disrespect to him,” the protester said. “It’s just, you’re not going to come in here and try to say to thousands of students, ‘Oh, we care about everybody. We’re a big family.’ It’s just not the case.”

Social justice advocacy from groups that seek to amplify the voices of marginalized students has forced the campus community to reconsider itself as a diverse and welcoming place. Much of the resistance to the protest’s efforts marks a perception gap in the college’s climate. For some students, the college is a microcosm of intellectual and cultural diversity, while others see it as uniform and feel alienated by what they see as elitism and exclusiveness.

According to the Fall 2012 campus-climate survey, 57 percent of white student respondents said they thought the college places a high priority on diversity and inclusion compared to 26 percent of African, Latino, Asian and Native American student respondents. This gap is congruent with the survey’s result, which reveals 56 percent of ALANA students agree with the statement “people at the college do not receive equal treatment,” compared to 39 percent of white students.

Sociology assistant professor Sergio Cabrera said the college exists in a legacy of many small, elite institutions in the 20th century in rural settings competing for the patronage of wealthy families looking to keep their students away from the vices and minority and poor groups of people in the city.

“It may still be a thing, but it’s not as prevalent today,” he said. “The city itself, because of the college, has a reputation for being a welcoming, liberal and diverse place. At least, that’s the reputation.”

From the Bronx in New York, sophomore Denny Pena said he felt pressured to alter how he dresses and how he speaks from being surrounded by a predominantly white student body.

In this act of speaking and behaving differently from how he would in his hometown, he said, he sacrifices a part of his culture as someone from the Bronx and as a Latin American.

Pena said to reclaim his Latin roots, he goes salsa dancing and spends time with his other Latin American friends.

From Bay Shore, Long Island, a senior who requested to remain anonymous said there were no illusions about one’s privilege in her hometown because the wealthier suburbs were only a minute away from impoverished neighborhoods.

“I didn’t realize how not run-of-the-mill white my life was until I got here,” she said. “It was as if nothing challenged the way these people had thought, and it allowed them to exist in a very shallow version of the world with simple morals and with less character, less at stake, less on the line.”

She said transitioning into the college posed a great culture clash to her.

“I definitely learned eventually how to translate my experiences to a perspective that was easy on the ears of someone of a middle-class, white life,” she said. “When I got here, I couldn’t make anyone relate to me. I would try and tell them, but it would only alienate me more, and I felt like no one could know me unless they knew my past first because I realize how prominent it was in who I shaped me to be.”

Sophomore Theophilus Alexander said upon entering his freshman year as a student of color from Mamaroneck, New York, in Westchester County, he is used to being seen differently.

“Look around the library. You don’t see too many people that resemble my color, right? I might be the only black person in this library,” Alexander said. “I’m a tall black guy. Height is already intimidating to people. And then I’m black. When you put those two things together, it creates fear. We all wish we could change it, but that’s just how it is,” he said.

Freshman Julia Ladd, from the small town of Bow, New Hampshire, said the college is much more diverse than her predominantly white and wealthy suburban hometown, where she graduated from a school with a minority population of 7 percent.

“Coming here, I’ve learned so much about different cultures and even different areas of the United States,” she said.

While her high school’s social sphere didn’t let students be themselves, she said she believes the culture at the college allows for students to be whoever they needed to be.

An anonymous sophomore said although most of the people he has met since he moved into college have been friendly, he often finds himself suggesting they don’t use a racist or sexist comment to refer to a certain group of people. This is something he said he never has to do with his friends in his hometown of Portland, Oregon.

He describes the collective mentality at the college as “living in denial together.”

“I think it comes from being judgmental without even realizing it, which I think is common in affluent white communities,” he said. “I think we like to section ourselves off a lot and not admit to ourselves the fact we live a certain way means that someone else — whether it means the neighborhood across from you or the next state over or across the Pacific Ocean — that they don’t get to experience the quality of life and a lot of the luxuries that we get to have on a daily basis.”

Senior Dominick Recckio, president of the Student Government Association, said any efforts by the administration to diversify the student body have had more benefit for the white students than for students of color. Although the administration has increased diversity in the student body to 20 percent ALANA students, he said, it didn’t provide adequate support in the form of ALANA faculty retention, no provisions for a safe space and no diversity education, leaving many students of color to have to educate against microaggressions and institutionalized racism.

“Diversity shouldn’t exist here just to enhance my experience as a white student,” Recckio said. “We should have a diverse community where everyone is included and celebrated for being themselves.”