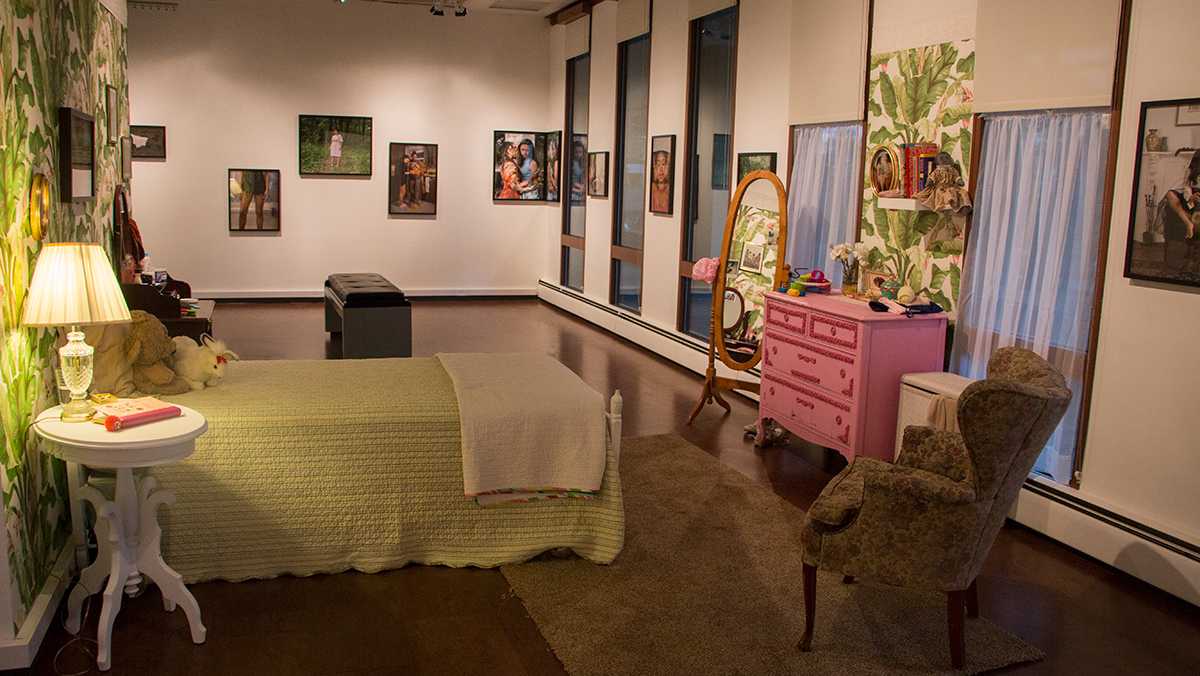 Erica Dischino/The Ithacan
Art associate professor Nydia Blas’ work “The Girls Who Spun Gold” is displayed along with the rest of the “Sun Flare” exhibition at the Handwerker Gallery until Oct. 12.
By Erica Dischino — Staff Writer
Published: September 21, 2016

Summer is often associated with the adolescent experience. The days are longer, the weather is warmer, and there are more opportunities for independent growth.

The Handwerker Gallery’s first exhibit of the 2016–17 academic year, “Sun Flare,” which opened Aug. 31 and will remain open until Oct. 12, explores this idea through works that highlight themes of self-identify, social awareness and patriarchal defiance to better understand the correlation between season and the development of self.

All of the exhibitions this year are inspired by one of the four humors, which is an ancient medical theory developed by Hippocrates between 460 to 370 BCE. The theory posits that an imbalance of one of the humors will affect a person’s health, actions and personality. These four humors include yellow bile, black bile, phlegm and blood.

Curated by Handwerker Gallery Director Mara Baldwin, with help from senior art history student Lisa Peck, the exhibition features the works of two artists: art associate professors Dara Engler’s “A Pirate’s Guide to Heat and Meat” and Nydia Blas’ “The Girls Who Spun Gold,” both of which incorporate the yellow bile characteristics experienced in the summer.

“Yellow bile represents youth and passion,” Peck said. “It’s a sort of an energy and willingness to really change in your environment.”

Knowing a large network of contemporary artists in upstate New York, Baldwin said she noticed many of them look at their body as inspiration for their work. She said she wanted to incorporate that body connection through the four humors.

Baldwin said pairing Engler and Blas’ works together with the yellow-bile theme gave the exhibit new meaning while also opening up a discussion about their other theme of patriarchal defiance.

“Anger is often associated with men. Lisa and I wanted to question that association through the pieces,” Baldwin said. “We wanted to have this exhibition about female anger and not necessarily feminine anger. There are parts of both artists’ work where that association doesn’t seem to quite fit, and that’s how it creates this interesting, nuanced field that opens up a space for questioning and discussion.”

Working as the research intern for the gallery this summer, Peck said, her task was to gather the information to inform the viewers about the four humors. At the entrance of the gallery, there is a section that gives context to the two works in relation to yellow bile through a compilation of her written text. She sectioned her research into five parts: myth, fire, identity, promises and walking, which are used to describe the yellow-bile theme.

“I found that identity and survival was a common narrative between the two,” Peck said. “There is strong connection between the works, but in different ways. You can see that literally in Dara’s work and more figuratively in Nydia’s.”

Engler’s work features a pirate character in most of her paintings. In “Sun Flare,” she uses those paintings along with museum-like dioramas of small taxidermic animals and physical remnants of an outside scene. This mix of media is also present in Blas’ work, which captures posed images of young women of color in conjunction with a bedroom scene with actual furniture and accessories.

In the context of the exhibit, both artists feature a strong female narrative. Blas, in particular, incorporates young women of color, which Peck said is essential to highlight, especially after the campus protests last fall.

“These shows are both topical and relevant to what we as college students are experiencing socially and emotionally,” Peck said. “Both artists’ narratives are especially important for the Ithaca College campus. The exhibition is multidimensional. There are many layers: On the surface, it might appear as just art, but there is so much meaning to it.”