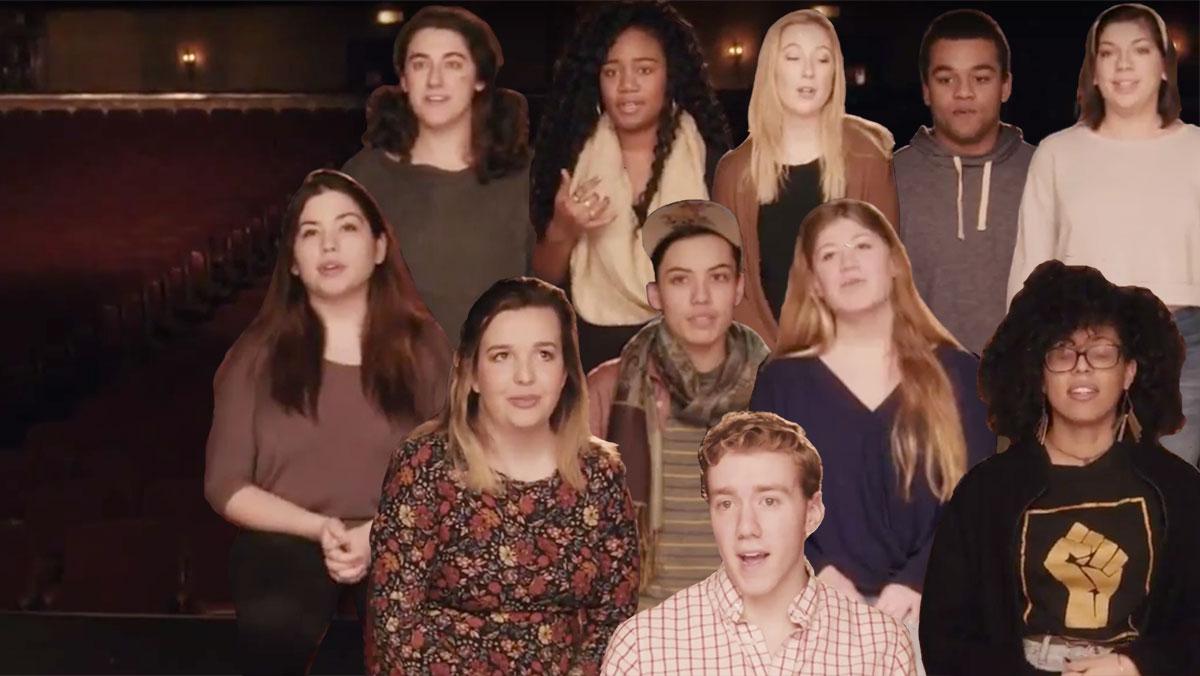 Issues of body image are widespread and can affect people of all ages, genders and backgrounds. A new media campaign at Ithaca College is addressing these issues in a way that emphasizes the importance of internal characteristics rather than the superficial ones.

IC Beyond Body is a campaign that found its roots last year during the minicourse Media for Social Responsibility: Media and Body Image: Does This Culture Make Me Look Fat?, when students were prompted to conceive an idea for a campaign as an assignment for the class. This idea was then conceptualized into an actual campaign with nationwide goals.

Headed by freshman Viktoria Schultz, associate producer for Park Productions, and supervised by Carol Jennings, director of the Park Media Lab, the project aims to combat negative body-image issues by sharing healthy thoughts and behaviors through positive language. The project has gained mobility thus far through student volunteers who have shared their own stories in the project launch video, and the team aims for the project to eventually gain traction nationally.

“We just want as many people to see it as possible and to get as many views as possible,” Schultz said.

Schultz first became involved with the project as a screenwriter, but given her majors in cinema and photography and business administration, she was named producer in September 2015. She has been responsible for scheduling and budgeting the project. Along with her team of peers, she hopes the project will be embraced by bigger movements with similar goals like the Geena Davis Institute for Gender in the Media and the Dove Campaign for Real Beauty.

“The point of doing it is so we can change the way people describe themselves in a positive way,” Schultz said. “When parents compliment their kids, their daughters, they shouldn’t be saying, ‘Oh, you’re so pretty,’ they should be saying, ‘You’re brilliant.’”

The team behind IC Beyond Body aims to extend the message of body positivity while focusing on nonphysical traits to a broader audience through creating a network of people who are involved in the topic, either through personal experience, expertise or interest.

“We would like to start with the campus community and extend the reach beyond the campus to groups of students in New York state and ultimately nationwide,” Jennings said.

The Park Media Lab has created a website, social media campaign and 13 videos for IC Beyond Body. These videos include speakers like Connie Sobczak and Geena Davis, who talk about issues of image, student stories and connection to other resources. The team expects to produce five more videos that are more creative and situation-based to further its message, Schultz said, similar to advertisements done by The Real Cost antismoking campaign.

The issue of body image is a universal one, especially among young people, and this new campaign has been designed to bring topics of body image and conventional beauty standards to the center of the public’s attention through social media. Between girls and boys alike, self-esteem and body-image issues are prevalent.

According to statistics compiled by Heart of Leadership, nearly 80 percent of 10-year-old children are afraid of being fat, and “more than 90 percent of girls — 15 to 17 years — want to change at least one aspect of their physical appearance, with body weight ranking the highest.”

With an issue as widespread as body image, the campaign looks to address the many insecurities that begin in youth and remain prevalent into adulthood for many individuals. Problems with poor self-esteem and negative body image have been seen to lead to illnesses including depression and eating disorders. Media in the form of magazines and television have perpetuated some of these self-esteem and body issues among young people by setting unrealistic standards for attractiveness.

For instance, 63 percent of girls see the standards for body image represented in the fashion industry as unrealistic, but 60 percent still compare their appearance to that of fashion models, according to the Girl Scouts of the USA and The Dove Self-Esteem Fund.

This campaign looks to combat socially defined beauty “standards,” specifically coming from ideals of beauty in television. In the launch video, volunteers were asked the question “Who do you want to look like?” where they replied with individuals widely known for their physical attractiveness, such as Taylor Swift, the Kardashians and Chris Evans. They were then asked, “Who do you want to be like?” The volunteers shifted their focus from who they wished they were externally to who they wish to be internally.

Freshman Spencer Muhlstock, who was in charge of the production of the initial project launch video, is also looking to be involved in upcoming IC Beyond Body videos. He aims to further the campaign in a way that will bring a maximum number of viewers to the site.

“We are looking to make 30-second commercial spots, too, but the launch video is the main thing we want people to see,” Muhlstock said.

The project, while headed by students within Park Productions, is important to members of the team on a personal level, too. Schultz finds significance within the campaign as she has nationwide goals that address a widespread issue, but she is also personally passionate about the topic of body image.

“Of all campaigns to be part of, this one kind of hits home,” Schultz said. “Everyone has body-image issues growing up, but that’s why I was very proud of working on this: because I know it’s something everyone can relate to.”

Kathleen McAleese can be reached at kmcaleese@ithaca.edu or via Twitter: @@kthln_mcls