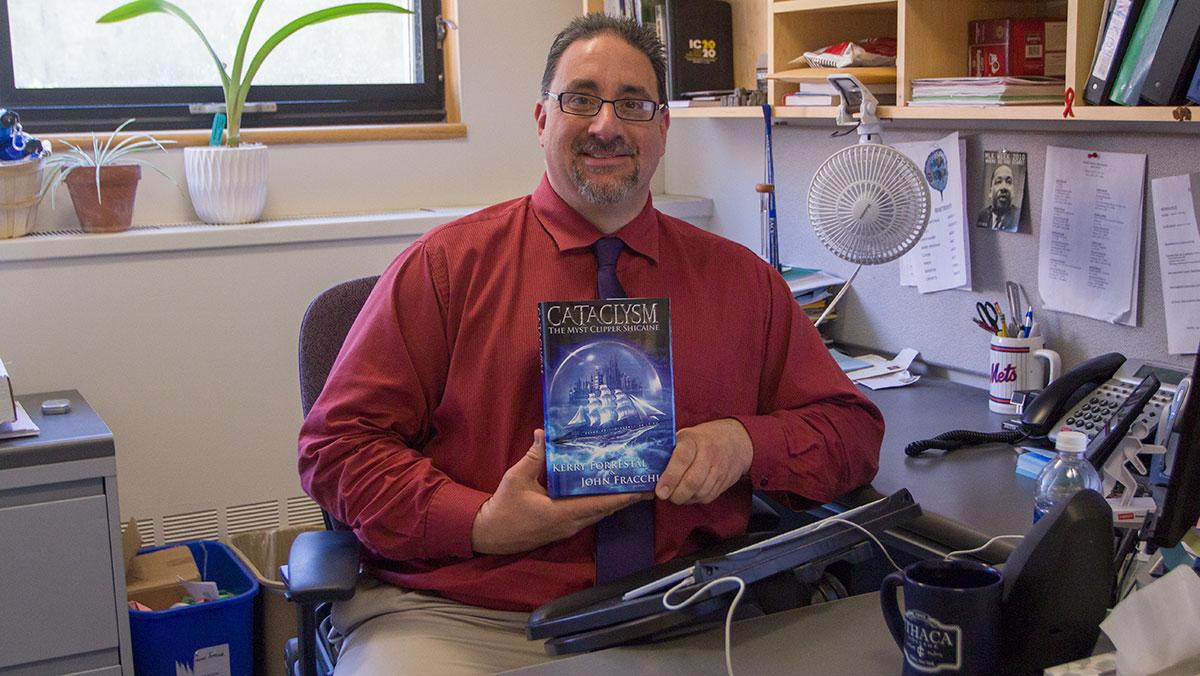 T’Amorach is a world that has been destroyed and rendered uninhabitable by a cataclysmic event. It is also a world created by a pair of first-time authors, both with unrelated professional experience.

John Fracchia, associate director of the Office of Career Services at Ithaca College, and Kerry Forrestal, an emergency medical physician in Maryland, drew inspiration from their shared love of science-fiction and co-wrote “Cataclysm: The Myst Clipper Shicaine,” a science-fiction novel released May 4. It is the first book of a four-part series the authors plan to write. Its release comes about 20 years after the co-authors initially came up with the idea.

Fracchia and Forrestal met during their undergraduate education at Binghamton University in 1984. Since then, they have been friends, business partners, playwrights and now authors.

The concept for “Cataclysm” was conceived about 20 years ago as a result of each author’s independent ideas. At the time of its inception, Fracchia was thinking about a story that revolved around a theocracy, while Forrestal was working with an idea about ships. They eventually combined their ideas when they saw how well they worked together, Fracchia said.

“The more we talked, the more we realized elements of our stories could intersect really well, and we had one of those, ‘Hey, do you want to try and write something around these ideas?’” Fracchia said. “We always approach it from the idea of, ‘Will it be fun to do?’ and usually when we take that approach, we’re happy with the results. It’s fun to create, and it’s fun to create with other people.”

The final version tells the story of a few surviving cultures that remain in T’Amorach after the cataclysm. The groups depend on each other and survive through trade. One of the ships that engages in trade is the Myst Clipper Shicaine. Crew members of this ship are eventually captured and disbanded. Five years later, someone is killing the remaining crew members, and it is up to the ship’s captain, Nathaniel Gedrick, to figure out who is killing them and why they are waging a war against the different zones.

Fracchia said although many people question how it is possible for two people to co-write a book, he believes the process is not as difficult as others think it is. While writing, Fracchia and Forrestal bounced ideas off each other and were open to every suggestion.

This is not the first time the two have collaborated on a piece. In the 1990s, they co-wrote “Club Hell,” a play about two marketers who use their business skills to scam the devil and convince him to turn hell into a resort.

Fracchia said while their two works differ greatly in subject matter, “Club Hell” helped the duo establish their writing style and served as a steppingstone for future projects.

“‘Club Hell’ was a great place for us to figure out our writing process,” Fracchia said. “It was also a great way to figure out how to navigate feedback to each other.”

Elizabeth Haydon, an author of fantasy and young adult novels and former classmate of Forrestal at Binghamton University, mentored Fracchia and Forrestal throughout the editorial and publishing process of “Cataclysm.” Before becoming an author, Haydon was a developmental editor working with authors by editing mainly for content and overall structure of their books. She has been in the publishing industry for over 30 years.

Haydon began working with the two when they sent her a copy of “Cataclysm” in its early stages. Haydon said she admires the partnership that Fracchia and Forrestal share.

“It’s very difficult to collaborate with another person on a book,” Haydon said. “It seems like an easy thing to do, but it’s not. There’s a lot of confusion and ego, and it’s not something I’m good at.”

Forrestal said “Cataclysm” means more to him than just a paycheck. He attended college with Fracchia and Haydon and since graduating, had lost touch with Haydon. The process of creating this book brought the three friends closer after years of losing contact with one another, he said.

“Even if this book doesn’t sell a copy, it wouldn’t matter because it kept me in contact with John and brought me back into contact with Elizabeth and her family. You can’t put a price on that,” Forrestal said. “The experience has been a renewal of friendship, maintaining a friendship and creating something new.”