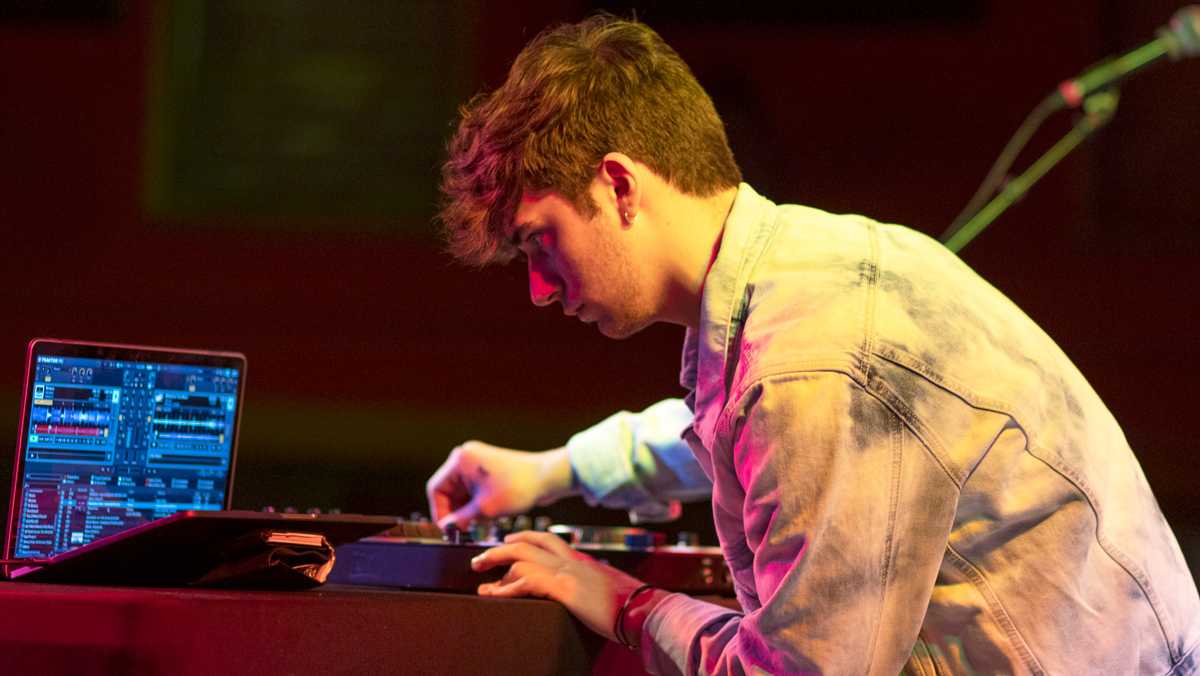 “DROWN” is an electronic dance music (EDM) track with 168,358 plays on Spotify — a statement number for Ivy., the stage name of Ithaca College junior Graham Johnson.

“DROWN” has significantly more listens than Johnson’s two other songs, “Ascension” and “Cold,” which have less than 1,000 listens. But all his songs stem from the same place: his history as a musician.

“I’ve played a lot of different instruments since I was pretty young,” Johnson said. “I started off with a violin when I was about seven years old, I think, and then just transitioned to different instruments and eventually got into production, which I thought was really interesting just because of the freedom that it offers.”

Johnson said he both uses and ventures outside conventional EDM sounds in his music. In “DROWN,” a high-pitched melody drives the song’s electric rhythm. Sharp beat drops, a pulsing digital drum and bodiless vocals also define the song, but toward the song’s end, a soft piano holds the focus.

Merging genres and experimental exploration is a key element of his music, Johnson said.

“I really like creating new things or things that people haven’t heard before,” he said. “Originality is a huge part of it to me. … Creating something brand new is just a great feeling, honestly.”

In his Spotify for Artists 2019 Wrapped — a breakdown of a Spotify artist’s statistics for the year — Johnson’s music was streamed 160.8k times, listened to for 8.6k hours, amassed 62k listeners and drew users from 79 countries.

Junior Sam Smith met Johnson during their freshman orientation. This was the first time Smith heard Johnson’s music, but, Smith said, it was during Spring 2018 that he chose to be Johnson’s manager.

“At first it was a test for me to see more into marketing, … and then it became this huge thing where I realized I wasn’t so much into film anymore, which is my major,” Smith said. “I really started moving into the field of artist management and into the music industry, and that was where it blossomed.”

As a solo artist with Smith as his manager, Johnson released “DROWN” with the record label Lowly Palace — a sub-label of Trap Nation, which is a record label prominent on YouTube and Spotify. Smith was in contact with the label coordinators and marketing teams at Lowly Palace in February 2019 after the label expressed an interest in Johnson’s music. Johnson signed a contract for a single-track record release for “DROWN,” which was released on Spotify on April 30.

Before he released his songs on Spotify, Johnson posted the bulk of his music on SoundCloud. Unlike Spotify, which requires artists to pay a fee for distribution, SoundCloud users can upload and publicize up to 180 minutes of their music for free. This easier access has fostered a community of emerging artists on SoundCloud.

“It is cool to connect with different artists,” he said. “And as soon as you see somebody else’s piece, you can message them and be like, ‘Hey, this is really cool. I like what you did.’ Sometimes you’ll get that back from other artists.”

Smith books Johnson’s shows, talks to promoters, manages Johnson’s career financially and advises his social media. Learning how to manage a musician and navigate the music industry was hectic and surreal, Smith said, but as the two booked more shows and Johnson eventually signed the contract with Lowly Palace, these feelings began to dissipate. They were replaced instead by the need to balance schoolwork with shows, which often took place during the school week in Syracuse, New York.

“He’s been able to play for idols of ours, in front of people that he has looked up to for his music,” he said. “What’s been the coolest thing is seeing his music progress, and the way he moves through genres is really cool. … So when you hear his music, … you can really hear similarities, but it’s always something new with each song, and I think that’s really awesome.”

Though Johnson said he has faced struggles in terms of creative blocks and decent exposure for his music, overall he thinks his budding music career has gone relatively well so far.

“Once you really get into the flow of creativity where everything just sort of starts coming naturally and you just get really wrapped up in the composition process, it’s a great feeling,” Johnson said.

One upcoming collaboration Johnson has is with junior Danni Carra, a fellow EDM artist with music of her own. While Carra said she often produces chilled-out EDM, a style distinctly different than Johnson’s trap style, she said their sounds blend together well.

Johnson is working to remix Carra’s song “Hold On.” Carra released the original song over the summer under the label Mr. Suicide Sheep and with the producers Gill Chang and Maazel. Carra said she heard a rough draft of Johnson’s remix, and if Johnson’s remix is approved by her label, the song will be either released as a single or in a remix pack, a short album with remixes of “Hold On.”

“He captured a lot of the elements that were originally in the song but added more of a dark vibe to it,” Carra said. “He just distorts what’s going on, and it definitely sounds like a remix.”

When he is on stage, Johnson said, he tries to cater to his audience. Very rarely does he have a setlist but rather a collection of tracks that he chooses from based on the venue he is playing and the audience’s reaction.

“Going based off of that can be a little bit more nerve–wracking,” Johnson said. “It takes a minute to really get into the groove of things, but then after that, it all comes pretty easily.”

The 2019 Ithaca College Showcase on Dec. 8 at The Haunt in Ithaca marked Johnson’s ninth and final show for Fall 2019, but Johnson and Smith said 2020 will yield more songs, more concerts and more collaborations. The smaller venues and crowds were valuable beginnings to hopefully larger shows in the future, Smith said.

Bob Dylan and his Band perform on campus