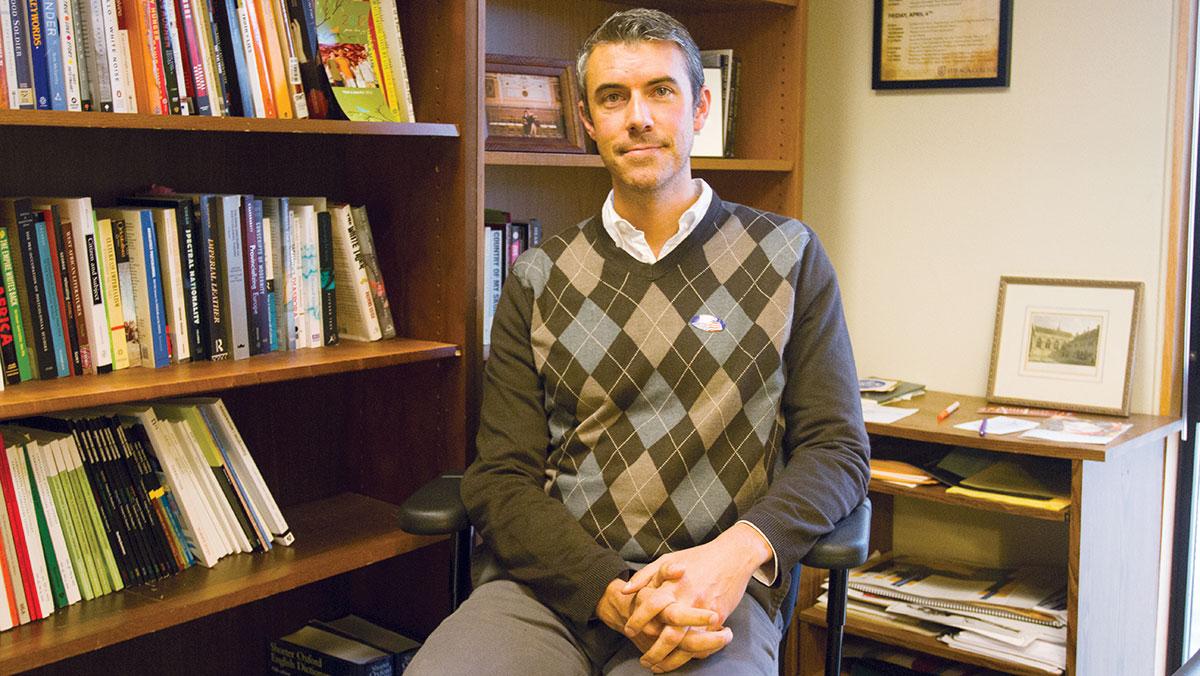 Amanda den Hartog/The Ithacan
Chris Holmes, assistant professor of English, was invited to guest-direct a graduate seminar and give a lecture at Queen Mary College in the University of London about postcolonial literature.
By Evin Billington — Life & Culture Editor
Published: November 5, 2014

This spring, Chris Holmes, assistant professor of English, will travel to England to guest-direct a graduate seminar and give a lecture at Queen Mary College in the University of London about postcolonial literature and the Nobel prize–winning author J.M. Coetzee.

Evin Billington: How did the invitation to give the guest lecture and the seminar come about?

Chris Holmes: It came about in part because of a long partnership with a professor at Queen Mary University of London, Andrew van der Vlies. I first met him and another prominent South Africanist at a conference in Providence Rhode Island in 2010 or ’11 and got to sort of sharing work and thinking about work on contemporary South African literature. And so we’ve been sharing each others work for a while, and then, initially, we had planned to have a sort of online, international exchange. And so through those connections, Andrew eventually decided to invite me to come and both give a talk to the postgraduate research group. Basically, the graduate students over the course of the year invite someone about every two weeks or so to come and give a lecture on something that they’re writing about or working on. And then, additionally, he teaches a class for master’s students on the work on J.M. Coetzee, and he knew that a lot of my research is on Coetzee.

EB: What has drawn you to studying Coetzee? What do you like about his literature?

CH: For me, I think he’s probably the greatest contemporary writer in English, and in part that has to do with the fact that he is both a sort of insider and an outsider. … He’s an insider because it’s a place that formed him, and most of his work is sort of run through the experience of a largely progressive, but nevertheless white, South Afrikaner who has gotten to take advantage of the deep inequalities that favored whites under apartheid. He’s also an outsider because he’s lived much of his writing life outside of South Africa, and so he looks back into the country with a very particular kind of perspective, and it’s a perspective that some people think is sort of an inauthentic one because he’s not there on the ground level looking in. I think it offers him a very particular kind of window, especially into the problems of knowledge. How do you know about a place and claim to know about a place, and as well, the value of the aesthetic for very fraught and very troublesome times in history? … Coetzee is remarkable among novelists for his conviction that language’s flaws and failures, its slippages and erasures are themselves the catalysts to meaning-making. That conviction shows up in his fiction as characters who are overwrought about the language that they use and its inability to join vital connections to those around them. Rather than feeling like treatises on linguistic pessimism, Coetzee’s novels manage to feel like they are brewing — seething even — with inchoate thought. That’s the magic of Coetzee’s work. We encounter his texts before they’ve come to the end of their thinking, at the moment when the failure of language means that a radical reconfiguration of the structures for thinking anew come into play. His novels are thinking apparatuses, rather than storehouses of thought. He manages to makes his characters’ states of disgrace and paralysis feel like the jumping-off point for the creation of new modes of thought — but they aren’t fully made yet. We are watching the machinery in motion.

CH: I’ll just sort of be dipping in very briefly with them and talking about just one text, I don’t even know what it is yet. But Andrew, who is himself South African, and has a much deeper and broader both personal and intellectual experience with South Africa, will be giving, I’m sure, a lot of background. I think that unless you’re in Southern Africa, and probably unless you’re in South Africa, you don’t have adequate knowledge to encounter it. But I would say that would be true about almost any place, but perhaps more true about Africa because we’re so insulated about any experience of Africa other than what gets called “African pessimism,” which is everything from the BBC, to Fox News to any major Western news outlet treats Africa as either a disease, failure to progress economically or as a kind of postcolonial disaster area. These obviously do not reflect anything like the day-to-day experience for Southern Africans or people in South Africa. So, without any experience other than Afro-pessimism, you have to do a lot of catch-up work with the students.

EB: Does that make South African literature any more difficult to understand or to teach?

CH: I mean it’s different than teaching American literature because you just have this, you have a ground level expectation of what people will know and understand. That is not only like pop-cultural or contemporary or rhetorical knowledge, but as well just language. English in South Africa uses words differently and has different ways of kind of conjuring language with English that’s inflected by Xhosa and Zulu and all these other kind of interconnected linguistic nodes. And so, from the small linguistic things to the larger cultural, historical institutions, I can’t come in with any expectations that students will have the knowledge.

EB: What first got you into postcolonial and postapartheid literature?

CH: For me, the period of time starting in approximately 1950 to the present in history and literature, and the moment in which the world wakes up to the extraordinary literary commitments and investments of non-European nations. There’s this long period of time where especially British colonialism, but colonialism in general, sort of papers over the rest of the world’s cultural and historical achievements, aspirations, motivations, other languages, other peoples. Starting in the ’40s with stuff in South Asia, with the ending of various colonial periods in South Asia and coursing through Latin America and Africa and we see this sort of, the veil comes off. And so, I think it’s an incredibly exciting time to think about the literary history of the world, because all of a sudden it gets much bigger and better, I would argue. You see not just what, for a very long time, Britain only wanted to see its colonies literatures as derivative … but as soon as that sort of veil is drawn back, you realize not only is there a pre-existing literary culture, but there’s one that’s talking at the colonies and riffing on things and changing them and making them their own to have investments in ways that the Western world was never willing to see.