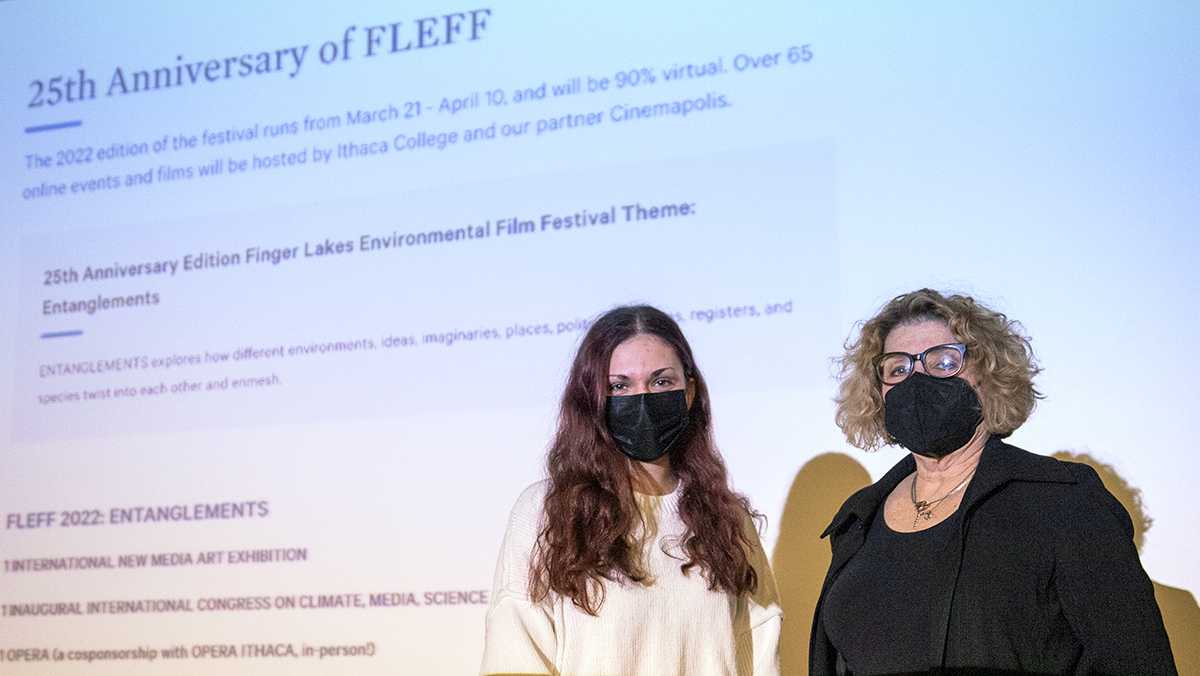 The Finger Lakes Environmental Film Festival (FLEFF), primarily sponsored by Ithaca College, will return for its 25th year in March, centering on the theme of entanglements.

FLEFF will run from March 21 to April 10 and will feature over 65 events and films both online and in person. In addition to films, the festival programming includes discussions with experts and scholars, concerts and presentations. All the festival’s events will be connected to the entanglement theme, which refers to the interaction and blending of concepts like environment, culture and economics.

In addition to the new content at this year’s festival, in celebration of the 25th anniversary members of the FLEFF team organized a “25 for 25” project. The project consists of a compilation of stories from past FLEFF contributors sharing the festival’s impact.

Patricia Zimmermann, Charles A. Dana professor of screen studies at the college, served as co-director of FLEFF from 2004 to 2021 alongside Thomas Shevory, retired professor in the Department of Politics. Zimmermann is the sole director for the 2022 festival. She said the festival’s programming covers topics relating to every school on the college’s campus.

“One thing that I’ve enjoyed about being the director of FLEFF for 20 years is the incredible dynamic intellectual energy,” Zimmermann said. “The way I think of it is it’s a combustion engine, you know, bringing all these pieces together.”

It would be impossible, Zimmermann said, to host a festival like FLEFF without the contributions of many people. She said her role is to bring people together in a way that inspires collaboration and community.

“The biggest compliment a festival director can have is that people don’t know who you are,” Zimmermann said.

Since the festival moved from Cornell University to Ithaca College in 2003, a theme has been chosen annually to connect the material and to reinforce that the festival is education based rather than commercial.

To find a theme for each year’s festival, Zimmermann said she researches environmental, political and human rights issues to find a theme that is appropriate, but abstract enough to curate work in many subject areas.

Junior Taylor Cliff served as an intern for FLEFF in 2021 and is returning as an assistant to the producers. In this role, Cliff and other students will work with FLEFF producers Ann Michael and Phil Wilde who organize festival programming. She said the broadness of the theme is interesting and she can already see the connection to some FLEFF 2022 content.

This year, FLEFF has 19 partners, from local to global. Zimmermann said this is the first year these partners have been announced on a partners page, rather than attached to specific events. This was done to recognize everything partners have contributed to FLEFF. Partners provide contributions like financial support, expertise, films and streaming locations.

Zimmermann said partnerships develop over many years of collaboration. This year’s new partners include Art Mattan films, Scribe Video and the Center for the Study of Globalization and Cultures (CSGC).

“There’s two plus decades of relationship building with people in Ithaca, at the college, across the nation and across the world, that’s how you put on a festival,” Zimmermann said. “We wanted to, this year, really acknowledge those relationships.”

The CSGC is a center at Hong Kong University dedicated to supporting research on globalization and cultural change. Although it is its first year as a partner, this is the second year that the CSGC will be involved with FLEFF. Gina Marchetti, CSGC director, said at this year’s festival the CSGC will be hosting two panels on Chinese-language filmmakers.

“We’ve been really delighted to be able to particularly work with FLEFF on their programming involving Chinese-language film and the cultural component of environmental and eco-critical developments in this part of the world,” Marchetti said.

Zimmermann said there has been an increase in partners this year, likely as a result of last year’s virtual festival. By hosting online events, the festival was able to draw a larger audience. Zimmermann said people of many ages, professions and individuals from over 35 different countries attended last year’s festival.