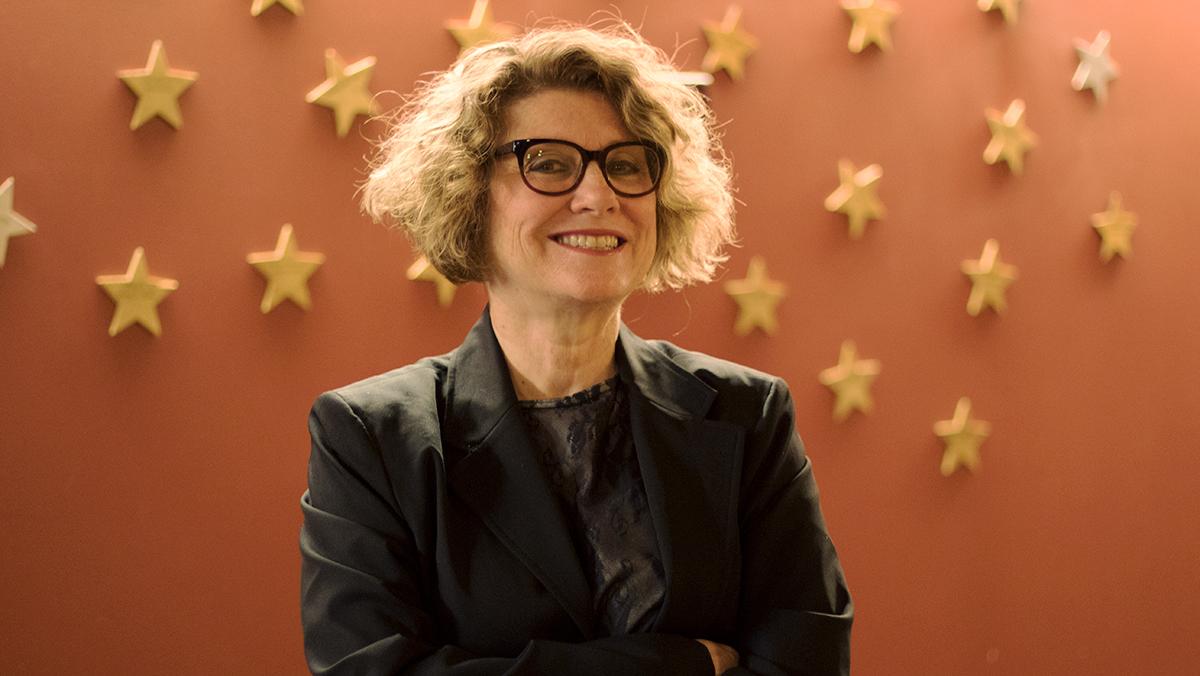 Connor Lange/The Ithacan
Patricia Zimmermann is a professor of Screen Studies in the Park School and is the author of several books including "Reel Families: A Social History of Amateur Film" and "Thinking Through Digital Media: Transnational Environments and Locative Places."
By Matt Ristaino — Staff Writer
Published: May 1, 2017

Patricia Zimmermann, professor of screen studies and co-director of the Finger Lakes Environmental Film Festival, was recently appointed by the American Film Showcase, a project of the U.S. State Department, to be a film envoy for documentary and new media.

Zimmermann has been an envoy since 2011, and this is her seventh time being reappointed.

The program consists of about 70 film experts who serve as envoys, spreading the art and knowledge of film, and Zimmermann is one of only two who are film scholars who also write and teach about film. She is also the only envoy who works for a four-year undergraduate institution. Zimmermann travels the globe showing documentary and new media, including work from FLEFF.

Staff writer Matt Ristaino spoke with Zimmermann about her role, experiences and biggest takeaways from being a film envoy.

Matt Ristaino: What does a film envoy actually do?

Patricia Zimmermann: In my program, we are bringing independent American films and new media to the world, and these films offer a view of American society and culture as seen by those who are working outside of major media systems. It’s an independent vision of what American life is. There are three different types of envoys: There are envoys that are documentary film directors, and they would show their films; there are envoys who are people in various aspects of the independent film world, such as distributors; and then there’s me. I’m a scholar and a writer, so my role is a little different. What I do, when I go to other countries, is I will give lectures on some of my recent books, I will give lectures on documentary and new media and I will run workshops with filmmakers where I’m the moderator. They’ll often send me to a film festival where I’ll run a carefully produced Q&A with the filmmaker to showcase how their conceptual thinking works, and their challenges making the film. And then I’ll often be sent to universities to give lectures to students about documentary and new media. I create and catalyze dialogue about contemporary problems, conflicts and challenges around issues so that there’s a space for people to come together and speak, and where there’s a possibility to exchange ideas about life and culture in the host country and the United States, all through the lens of documentary and new media.

MR: Where in the world have you worked as an envoy?

MR: Can you describe what you did as an envoy while in those countries?

PZ: As an envoy, my major role is to provide and craft opportunities for dialog between American independent filmmakers and documentary scholars, like me, and people in these countries by using independent film and independent new media art as a catalyst for dialogue. The works that I bring and discuss in my lectures are works that explore conflicts and problems confronting American life. I show works on human rights issues and environmental issues. The idea is to show that American independent media is about debate. Contrary to what many people think, we don’t follow a state department line. We are there to represent ourselves. We do not represent the U.S. State Department. We represent our films, and in my case, our research, and show how conflict, debate and struggle is confronted in the United States through these forms. If I had to give a theme for my work when I’ve been in these different countries, it is to spread an understanding that independent media is a catalyst for dialogue about issues that matter and are often difficult to talk about.

MR: What are some of the takeaways that you’ve gotten from your work in all these different places that you can bring back to Ithaca College and use to inform your teaching and interactions with students?

PZ: One thing I have learned in my seven years as an envoy is the importance of humility. Part of this humility is understanding that the world is a very big place and much more complicated than what is represented by The New York Times, The Washington Post or The Economist. Before I go to any country, I usually know six to eight months in advance, and the reason for so much advance notice is I spend six to seven months reading as much as I can about that country. For example, before I went to Ukraine, I read 20 to 25 books about Ukraine, plus I read in-country websites. That’s the kind of preparation that’s required, because we’re not just traveling. We’re working there. You have to understand what are the problems, what are the histories, what is happening in these countries. It’s very critical to understand what one does not understand, and to be humble about it and to never assume what you think you know is in any way a good place to start. I always start from the opposite direction, that there’s a lot to learn, and I need to be a question-asker. What I think I bring back to Ithaca as a result of this is, first, the absolute necessity and urgency for every class I teach to be international in focus and to decenter American and Eurocentrism. Number two, I’m very insistent in my classes and with my students to be careful about language; what we call something. The example I would give you is, in my field, we no longer use the term “foreign film” because it creates an “us” and a “them”. We use the term “international cinema.” We must be cognizant that the language we use has political impacts that we may not be aware of. I’ve spent a lot of my career working in different parts of the globe where I have to be very aware of what I say as a white American. The third takeaway is that what I’ve seen is people around the world who are living in incredible environments of political upheaval and transition, oppression and censorship, and what I’m now convinced of is that technology does not matter. What matters is having clarity that democratic communication can be made no matter what technology you have. I’m in places where people are dealing with revolutions and struggles for democracy, and the last thing I hear about is technology. What everyone talks about is ideas and arguments and how to analyze, and I’ve seen works produced in all of these countries that astonish me and humble me. Ideas, politics, struggle, concepts and analysis produce media. One young man I met in Guinea said to me, “In Guinea, we do not make films to change the world the way American communications students talk. We make documentaries to remake the world we want to live in here.” Very powerful. … The objective is to expand the public sphere to recover stories that are suppressed, repressed or made invisible, to widen a space for dialogue in hopes that there will be a recovery of a civil society that might lead to more democracy. I never hear questions about technology or festivals. It’s always about what can journalism and documentary and new media art do to combat repression, oppression and suppression of ideas.

For the past three years at Ithaca College, the Finger Lakes Environmental Film Festival (FLEFF) has moved beyond traditional notions of environment to broader concepts and themes. “We have a broad definition of environmental [that includes] social justice, race and war,” said Tom Shevory, co-director of FLEFF and chair of the politics department. This year,…

Professor Patricia Zimmermann traveled to China as a part of the American Film Showcase, a program of the U.S. State Department.

Renate Ferro, a visiting assistant professor in the Department of Art at Cornell University, is showing her multimedia installation, “Panic Hits Home,” this week at the Handwerker Gallery, as part of the Finger Lakes Environmental Film Festival (FLEFF). The festival runs through Monday. Using audio and video, Ferro draws parallels between the post–Cold War era…