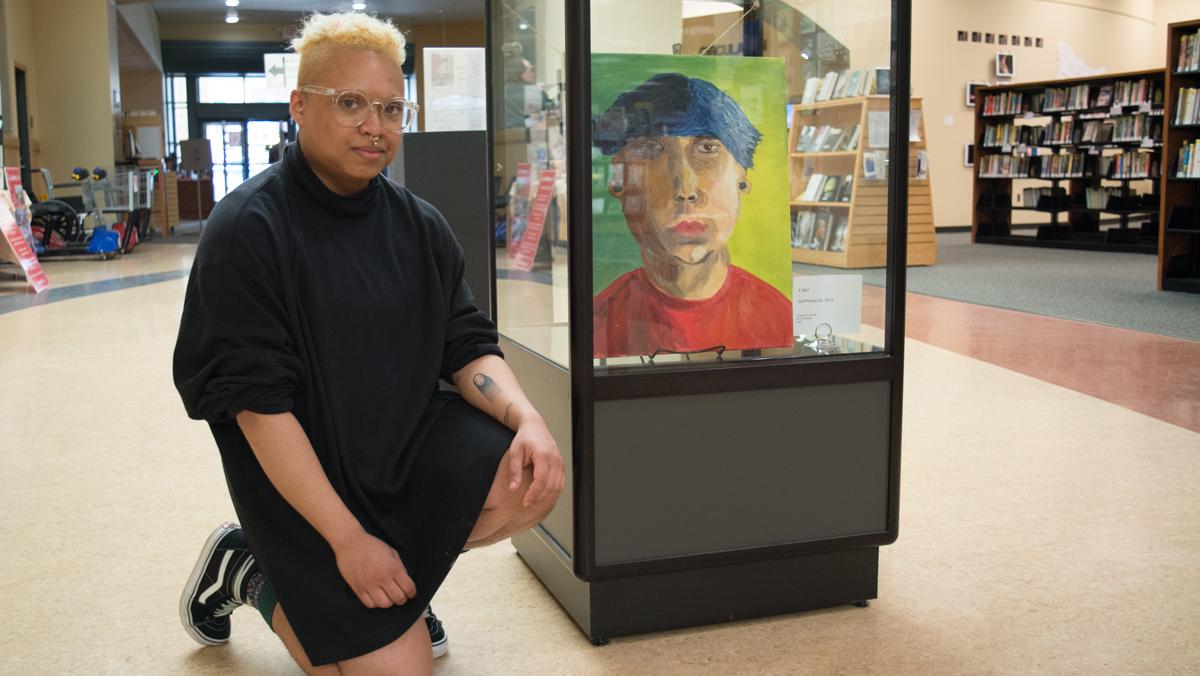 Ray Volkin/The Ithacan
"Who is Me?” is an art exhibition featuring work from artists with marginalized identities, and is cureated by senior x senn-yuen rance. It runs at Tompkins County Public Library until June 28.
By Silas White — Staff Writer
Published: April 25, 2018

Tackling topics surrounding identity, race and intersectionality, “Who is Me?” is an art exhibition featuring the work of artists with marginalized identities.

Curated by senior x senn-yuen rance, the exhibit features both current students and alumni of Ithaca College and is currently on display at the Tompkins County Public Library. They developed an interest in art their freshman year from browsing the Handwerker Gallery and were hired to work there their sophomore year, rance said. The TCPL was holding an open call for emerging art curators, and rance said they were encouraged to apply by Mara Baldwin, director of the Handwerker Gallery, last August. This year, the TCPL’s theme is identity, and each of its quarterly art galleries will focus on an aspect of this theme.

“I was really interested in intersectionality,” rance said. “There were a couple friends of mine, of color, whose work I definitely wanted in the show.”

They were seeking artists from roughly August 2017 to February of this year through word of mouth and social media, rance said. They started by reaching out to friends and acquaintances and networking from there. The name of the gallery, “Who is Me?,” is inspired by African–American vernacular English.

They identify as agender and use the pronouns they/them, so they were interested in featuring artists who also have marginalized identities, rance said. Their original idea was to work with college-aged people of color, but eventually, this idea evolved into highlighting the work of any person with a marginalized identity. Each of the eight artists, including themselves, comes from a multitude of marginalized groups, rance said. The work of their own that rance has on display consists of an acrylic self-portrait and a display of greeting cards and photos representing their past identity.

“We have queer people of color, a trans person with disabilities,” they said. “I really wanted to give these artists from underrepresented groups exposure. These are people who are systematically disenfranchised or oppressed, so I wanted to give them the opportunity to showcase their work.”

“I didn’t find it necessary that all the art be so explicit in being about identity,” rance said. “I come from the view that everything we do is influenced by our identity and lived experiences. There are so many judgments that get placed on these people, and it’s interesting to see the way people react to their work.”

Artists’ work ranges from paintings to short films displayed on monitors. On April 6, there was also a poetry open mic night. Senior Vanessa Reyes, one of the artists featured, submitted two works. “Excerpts from ‘America’” is a snippet of a larger theater piece Reyes wrote that focuses on immigration. “Stills from Percentages” is a photographic display of percentages written on Reyes’ skin that her sister received from an Ancestry.com DNA swab.

“These pieces are rooted in my own personal exploration of my identity while at the same time calling the U.S.’s attitude and discussions on immigration and race into question,” Reyes said.

Reyes said she loves writing, which is what drew her to playwriting and performance art.

“Writing feels so cathartic for me, and I have always found it in turn healing for others who relate to the shared experiences articulated,” Reyes said. “Along with writing, I love all art that is inherently theatrical.”

Reyes said she believes everyone has a relationship with intersectionality because everyone has multiple identities that overlap and interconnect. She said her whole life has been affected by her multitudes of identities, both ones that are marginalized and ones that have given her privilege.

“I am a queer woman of color,” Reyes said. “I am mixed race, a Mexican– and Korean–American. I am a first–generation college student, a proud child of immigrant parents who came from nothing. But I also can afford to go to a private college institution and receive a higher level education.”

Madeline May ’17 did a series of plant paintings for the exhibition. She originally was going to have her work displayed at The Shop, a coffee shop downtown, but it closed in January. After May found out about the exhibit from a mutual friend she shared with rance, she decided to become a part of it. May knew rance was looking for artists and asked to have her work featured.

“I started to think about the idea of identity and form a narrative of what these plants meant,” she said. “What I was doing with plants was thinking of growth, in terms of growth of my own identity over the last year.”

May said that as someone belonging to several minority groups, she sees issues of marginalization in her own life.

“As a queer, trans-fem autistic person, I try to consider intersectionality when discussing systems of power to make sure nobody is getting left behind,” May said.

Curating their first exhibition was stressful, rance said, but they’ve been happy with the result.

“It was interesting and nerve-racking,” they said. “It was intimidating when I didn’t think I’d be able to get artists. I was scared it wouldn’t go up in time and I was very nervous when I was stuck in that rut when I only had two artists … and I was concerned about filling the space.”

The exhibition is open until June 28. Note: rance spells their name in lowercase letters.