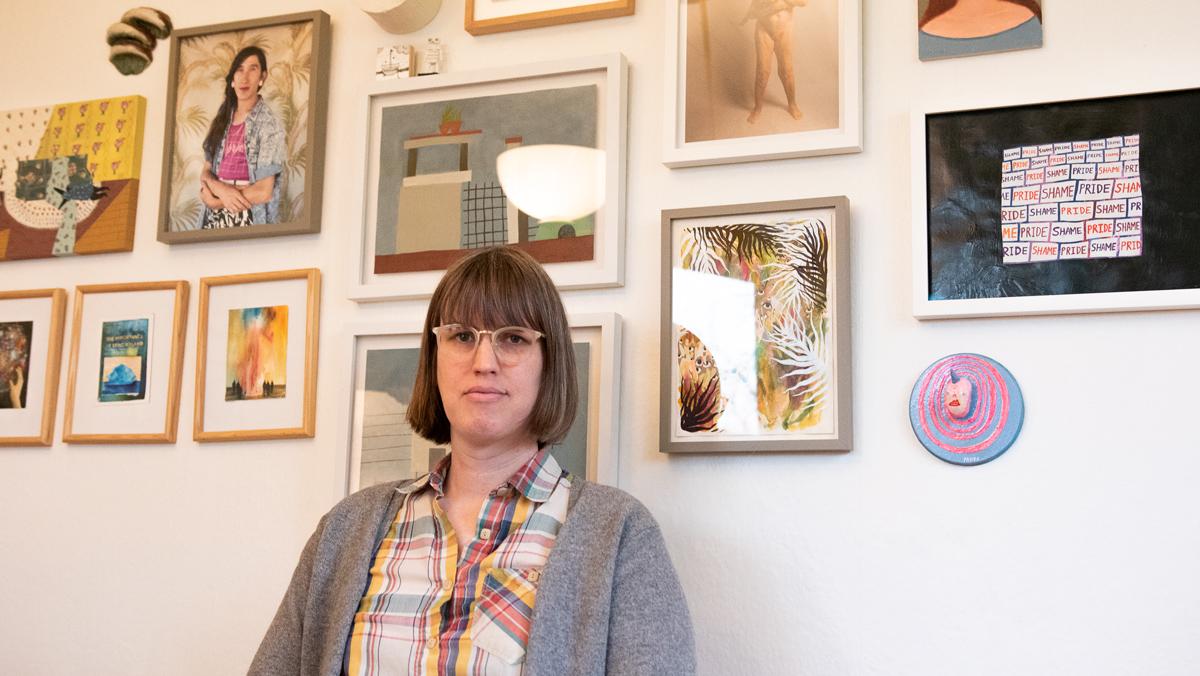 Ash Bailot/The Ithacan
Composer Sarah Hennies focuses on psychoacoustics in her music. Psychoacoustics is how sound behaves in a space. Hennies will be delivering a lecture called “A Persistent Obsession with Identity” at 5 p.m. Jan. 31 in the Iger Lecture Hall in the James J. Whalen Center for Music.
By Arleigh Rodgers
Published: January 29, 2020

As a professional composer, Sarah Hennies’ life and house revolve around music. Hennies attempts to usher her two troublemaking dogs, Twig and Harriet, around a shelf of musical records and a black cello laying on her coffee table.

However, the cello is not Hennies’ primary instrument. She’s using it to write a piece for another musician. Her true instruments are percussion-based: the drums, a xylophone and woodblocks. Her affinity for music began in her hometown, Louisville, Kentucky, she said.

Hennies lives in Ithaca, her solution to being on the East Coast without living in a big city. Prior to becoming a full-time musician, Hennies worked at Cornell University in 2013 as an events coordinator for the Society for the Humanities.

“That was just having a job,” she said. “I was doing those kinds of jobs for 15 years just waiting for being a musician to be a viable, full–time thing.”

Since then, Hennies has grown into an experimental composer who focuses on psychoacoustics, or how sound behaves in a space. As a transgender woman, she said she explores identity, specifically gender–nonconforming, queer and transgender identities, through her compositions.

These themes are the topic of her lecture “A Persistent Obsession with Identity,” which she will give at 5 p.m. Jan. 31 in the Iger Lecture Hall in the James J. Whalen Center for Music. The lecture is part of the Ithaca Sounding festival, a multiday event that features Ithaca-based musicians hosted by Cornell and Ithaca College. Grammy-nominated pianist Richard Valitutto will play Hennies’ hour-long piano solo “Semi-Occluded Vocal Tract” at 7 p.m. Jan. 30 in Cornell’s Herbert F. Johnson Museum of Art lobby as well.

Hennies’ lecture is sponsored by Ithaca Music Forum, a group that Sara Haefeli, associate professor in the Department of Music Theory, History and Composition, said brings speakers to campus to fill gaps in Whalen’s curriculum.

“The whole goal was to expand our curricular offerings through guest speakers and not only through the content of their talks but through the identity of the speakers, too,” she said. “[We bring] in scholars of color, female scholars and often young scholars so that the students can see themselves in the people that are guest speaking.”

Senior Kayla Shuster, a music theory major at the college, said her classes rarely focus on composers who are a part of marginalized groups.

“Beethoven, Bach, Mozart, Brahms — most people are like, … ‘Are all white guys mostly from Germany?’” she said. “In my music history class, one of my professors was like, ‘We’re going to do an entire day where we talk about women composers!’ … One day out of an entire semester.”

Haefeli also said Ithaca Sounding explores the music from late minimalist composer Julius Eastman. The festival features musicians who will perform Eastman’s music as well as speakers who will discuss the themes present in his work. Eastman was a black, gay musician who, like Hennies, lived in Ithaca and struck down the conventional ideas of what a composer should be.

Prior to performing her music professionally, Hennies attended a performing arts high school. It was not until college that Hennies dove into avant-garde chamber music and composers.

Hennies attended an undergraduate program at the University of Illinois Urbana-Champaign and a graduate program at the University of California, San Diego, where she studied percussion. While her degrees technically label her as a classically trained musician, Hennies said, she feels this description does not truly encapsulate who she is as an artist.

Hennies’ compositions can be outwardly simple: In her piece “Psalm 3,” the performer repeatedly hits a woodblock for the entire performance. But one of her most well-known compositions, “Contralto,” is written for seven musicians — a string quartet and three percussionists.

“Contralto” is paired with a film that examines transfeminine identities, with clips of seven transgender women speaking to the camera. These women can be heard practicing vocal exercises meant to train a person’s voice to sound more traditionally feminine that are written by speech pathologists. Another section of the film groups together scenes of the women responding to a question the audience does not know.

Hennies said the piece was a moment for her to reckon with being outwardly labeled as a transgender composer. But upon further examination and production of the piece, she said, she realized “Contralto” tied together the strings of all her previous pieces.

“When I started to psychoanalyze work that I had done before, I was thinking about identity and context in the music that I was like, ‘Oh, that’s what all of these pieces are about,’” Hennies said. “I just didn’t realize it.”

“Contralto” was screened at the Handwerker Gallery in Spring 2018 in conjunction with the annual Out of the Closet and Onto the Screen film series sponsored by the Ithaca College Center for LGBT Education, Outreach and Services. Luca Maurer, director of the Center for LGBT Education, Outreach and Services, helped the film through its process, including helping Hennies find grant funding and bringing it to the film series.

Maurer said musicians like Hennies can show LGBTQ students he advises at the college the diverse career opportunities that are open to them.

“I think it’s so important to have people like Sarah out there as artists, as performers, but also as role models and mentors,” he said. “I meet a lot of LGBT students who were like, … ‘Maybe I need to become an LGBT studies professor,’ and I’m like, ‘That’s great, … but that’s not the only thing that we can do.’”