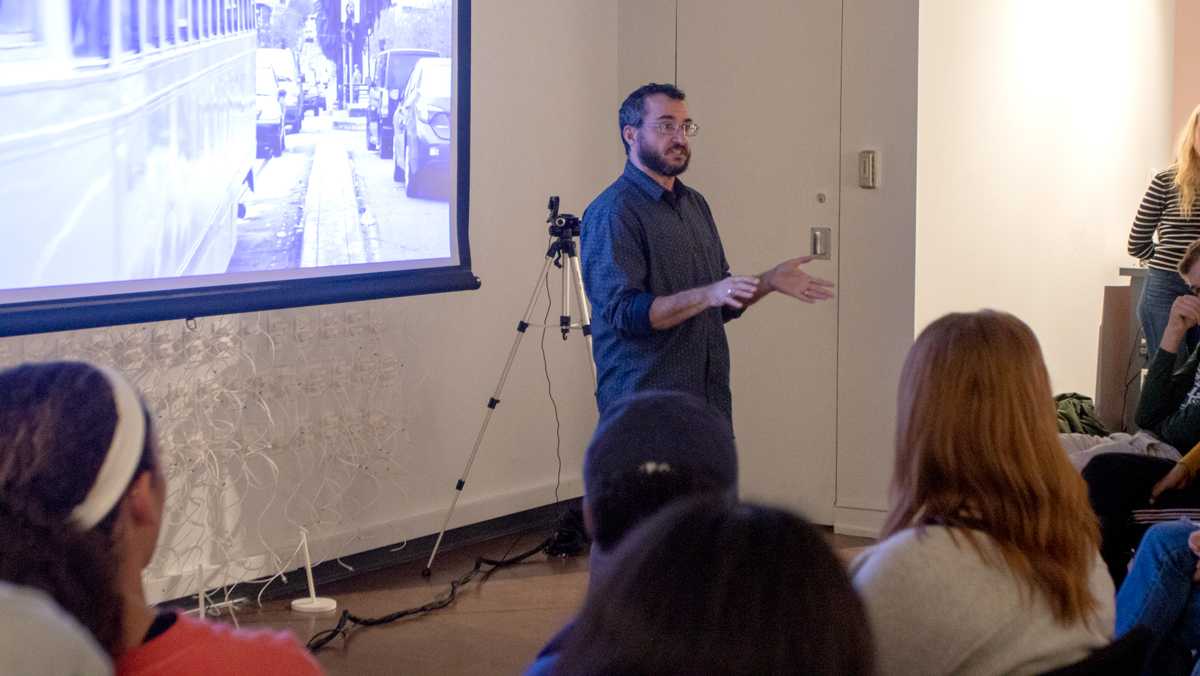 Maxine Hansford/The Ithacan
Out of the Closet and Onto the Screen Film Series consists of six screenings of documentaries that explore LGBTQ lives and identities.
By Tarini Venkat — Contributing Writer
Published: October 10, 2018

Inside the Handwerker Gallery on Oct. 2, rows of people sat watching the screening of “America in Transition.” The film highlighted the dysphoria, legal struggles and unfair court systems that transgender Americans face.

“America in Transition” was one of the six films screened as part of the Out of the Closet and Onto the Screen LGBTQ Film Series, the annual film series that lasts throughout the fall semester. This year’s film series includes the screening of six documentaries about LGBTQ history and issues. The next screening dates are Oct. 22, Nov. 7 and Dec. 6. This year, two of the movies are being followed by guest speakers from members of the film’s creative team or subjects.

The film series has been running since 2003 at Ithaca College under the guidance of Luca Maurer, director of the Center for LGBT Education, Outreach and Services. Maurer said the film series originated as the best way to have students learn more about the center.

“It’s a good way to give people an opportunity to stay after the movie and chat and meet different types of people or to leave as the credits are rolling to preserve their confidentiality if they want,” he said.

The film series partners with the Office of Student Engagement and Housing Offering Multicultural Experience (HOME) learning community. The film series counts as required HOME event credits and as a student leadership opportunity. Maurer said that some professors offer extra credit to students who attend these films.

Students are also involved in suggesting ideas for the yearly theme. This year’s theme is “connecting through community.” Students suggest films they would like to see at the screenings and organize guest discussions with producers or other members of teams that worked on certain films. One of the films, “Bruce and Daryl,” is a documentary produced by junior Alisha Tamarchenko and senior Joshua Jacobius profiling the relationship of Bruce Henderson, professor in the Department of Communication Studies, and Cornell Professor Emeritus Daryl Bem.

Maurer said Genevieve Labe ’09 was inspired by the film series in 2009 when the documentary “Key West: City of Colors” was screening. The film was about residents who created a gigantic rainbow pride flag that stretched from the Gulf of Mexico to the Atlantic Ocean as a symbol of unity. In April 2009, Labe recreated a similar pride flag on the college’s campus that was made to stretch from Campus Center to the Dillingham fountains.

Maurer also talked about how he likes to show films that highlight intersectional issues such as race, ethnicity, faith, sexuality and socioeconomic class.

“My office is there to focus across all of their identities,” he said. “Sometimes several are marginalized and stigmatized across society and show them role models in person or in film. We want to show the resilience of LGBTQ people, especially LGBT people of color and young LGBT people who have had remarkably important roles in the LGBT civil rights movement.”

On-campus clubs and groups can attend the screenings as part of their activities and for credit. One program that offered credit for the screening was the Student Leadership Institute, a program that consists of a series of workshops that cover social justice topics. Sophomore Aliyah Brathwaite said that the subject of the films represented the program’s values of social justice and leadership.

Freshman Daniel Batkin was at the screening for his Storytelling for Justice seminar. He said he learned more about the LGBTQ experience that he wouldn’t have otherwise.

“I think I learned that just because someone is LGBTQ doesn’t mean that they aren’t accepted by their families,” Batkin said.