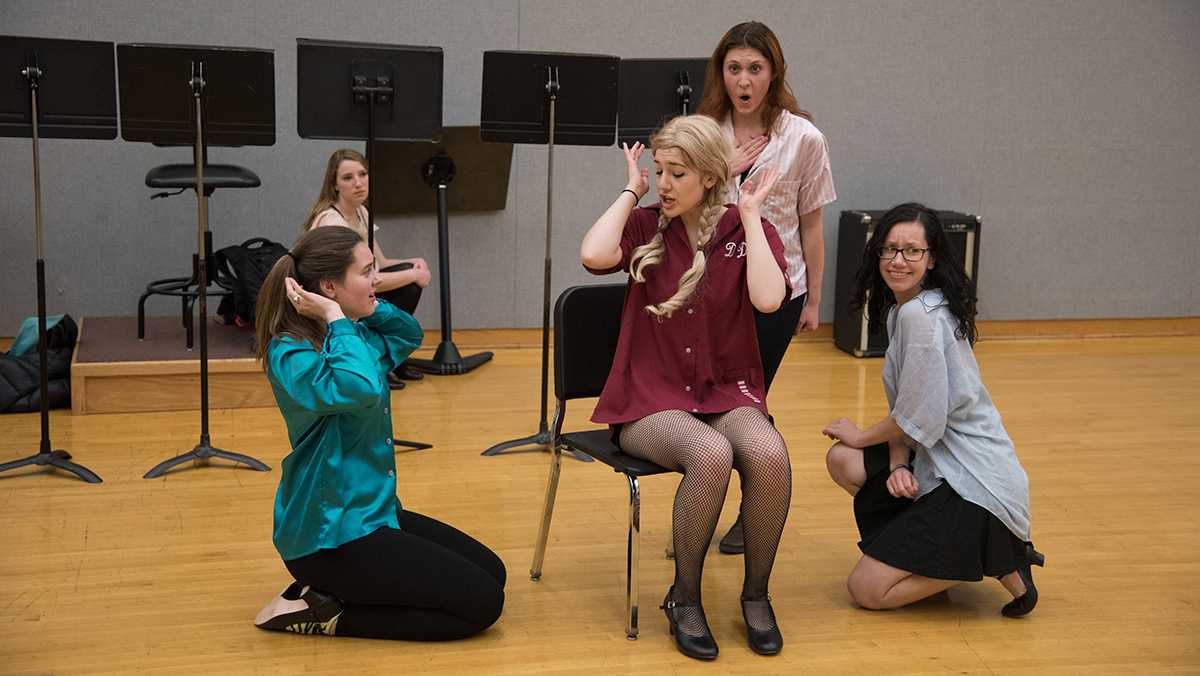 Jennifer Williams/The Ithacan
Performers in the show choir, Routine Disturbances, rehearse a number for their upcoming Fall 2015 showcase, “I’m THAT Girl” on Dec. 11. Routine Disturbances is in its third year, but this is the first time the group has been made up of only females.
By Silas White — Staff Writer
Published: December 8, 2015

As the last week of classes comes to a close, many students are studying for and anticipating their final exams. To offer a break from the studying and celebrate the end of the semester, the show choir group Routine Disturbances will be holding one last performance to end classes with a bang.

Routine Disturbances is the Ithaca College’s only show choir group, which performs song and dance from broadway musicals, and group members have been working all semester for their “last day of classes” show, called “I’m THAT Girl.” The group is in its third year and has usually been a mix of both male and female performers, but this semester, only women auditioned. Director Julia Kesel said this influenced their choice of songs, with numbers like “I Feel Pretty” from “West Side Story” and “Cell Block Tango” from “Chicago.”

“It’s kind of our theme to have power for girls,” Kesel said.

In past performances, the group performed songs from “Matilda,” “Guys and Dolls,” “The Addams Family” and more. This semester, the group decided to embrace the unusual change to all women by choosing songs reflecting femininity and female power. The choice of songs was a collaboration of everyone in the group, keeping in mind what songs worked best with their vocal arrangement, Kesel said.

Currently, the group has 11 performers, plus four people on the executive board. Kesel said while not all of their members have backgrounds in music, they take whoever has the most appealing voice and dance moves.

For instance, Dorrie Sacks, a sophomore cinema and photo major with no prior experience in show choir, joined simply to try something new. Even though she’s a newcomer, Sacks sings the lead in “I Feel Pretty.”

“It looked like a lot of fun,” she said. “I have stage fright, but this is a safe environment to overcome that.”

“I did show choir all throughout high school, and I really missed it when I came here, but I knew there was an opportunity for it, so I found it at the club fair and signed up,” she said.

For Mechler and others, show choir is an alternative to auditioning for one of the college’s plays, especially for those who enjoy singing and performing but are not musical theater majors.

“It’s hard to get into the plays if you’re not a musical theater major since our school has such a great program,” Mechler said. “I didn’t even try because I knew it would be competitive, but I auditioned for a bunch of stuff and decided to do this.”

Sophomore theater arts major Valerie Shvedok said rehearsal has been busy for the upcoming show, but members can choose their commitment level.

“We get to decide how many numbers to commit to. I’m doing four numbers, so it’s not bad,” Shvedok said. “But we’ve all been working hard throughout the semester.”

While the singers are an integral part to the group’s success, the two choreographers, sophomore Eddie Passero and junior Zondra Accorso, also play a large role. Like many of Routine Disturbances’ members, Passero performed in his high school show choir and wanted to continue in college. Passero said one of his and Accorso’s challenges is coming up with original dances that haven’t been seen before.

As treasurer, Passero is also responsible for budgeting costumes, paying the accompanist and picking the performance venue.
Passero had no prior experience as a choreographer but already knew how to dance from performing in show choir and used that knowledge to teach himself choreography, he said.

“What I think is really great is our choreography is wholly original. You will not see anything similar on Broadway or something like that,” he said.

Kesel hopes the show will please the audience and create new fans.

“Our goal as a group is to tell stories through song and dance and leave audiences happier than when they walked in, and hopefully excited to see us again in coming semesters,” Kesel said. “We’ve worked hard all semester, and our cast is excited to showcase what they’ve been practicing.”