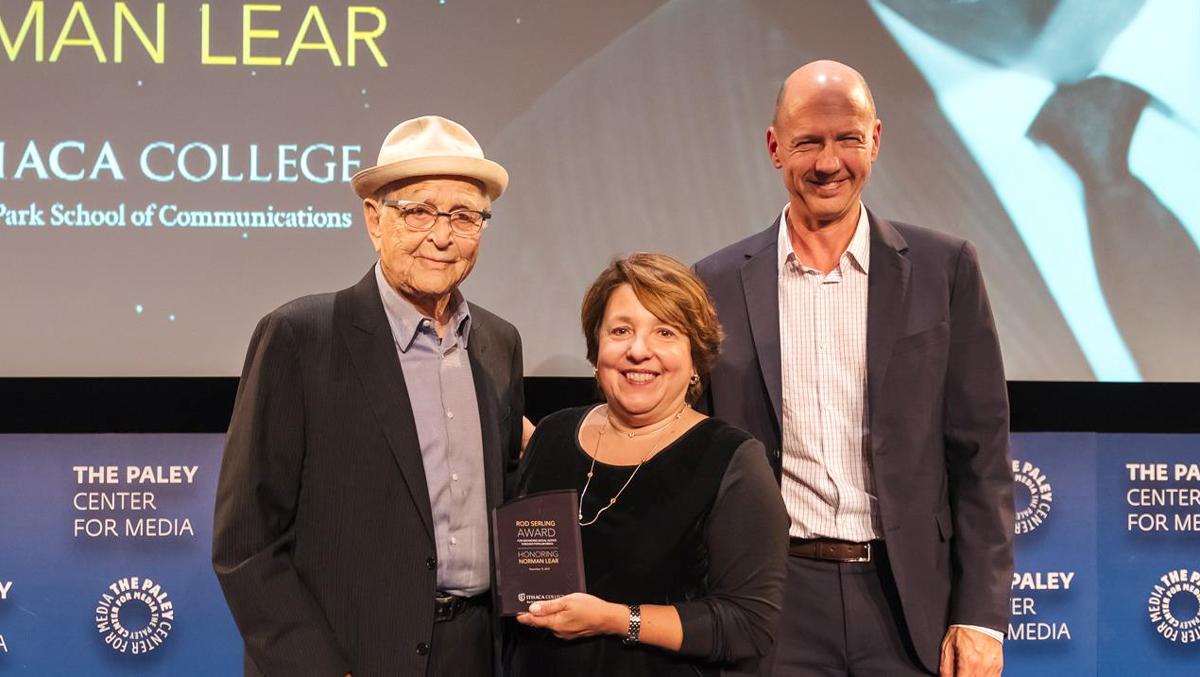 On Nov. 15, Norman Lear, legendary filmmaker and activist, was named the recipient of the Serling Award, an honor awarded by Ithaca College. The honor is annually given to an influential figure in the media industry whose work has helped shape the cultural landscape of entertainment. This year, the college chose to recognize Lear’s extensive career in television and film, his philanthropy, and his political and social activism.

The Serling Award is an honor the college has been giving out since 2015. Named after Rod Serling, creator of the classic “The Twilight Zone” series, it represents a standard for impact and achievement in the world of media. Serling influenced the landscape of TV throughout the 1950s by criticizing the ills of America, particularly prejudice, war and the power of corporations. Each year, administrators and professors at the college choose an individual with a far-reaching cultural impact in the world of television to receive this honor.

Lear began his television career after emerging from a field very different from the entertainment industry. Prior to TV, Lear flew 52 combat missions over Europe in World War II before leaving the pilot’s seat behind to allow his creativity to take flight. During the 1970s, his sitcoms “All in the Family,” “Maude,” “Good Times,” “The Jeffersons,” “Sanford and Son” and others, garnered a collective 120 million viewers each week. These shows not only received critical and commercial acclaim, but to this day, they are cited as cultural staples that brought modern-day issues into the living rooms of millions of Americans.

Though he was certainly an influential figure in Hollywood who pioneered countless trends of modern entertainment, it was not solely his work in television that led to his receiving the Serling Award, according to the college’s announcement of Lear being named the recipient. He was also an advocate. In 1980, while enjoying an abundance of wealth and success, Lear put his entertainment career on hold and co-founded People for the American Way as a response to the growing power of the radically religious right and the polarizing rhetoric of political televangelists. With the help of co-founder Congresswoman Barbara Jordan and a group of other civic, religious and civil rights leaders, they began a nonprofit organization that is still relevant today through continuing its opposition to right-wing extremism and supporting fundamental, constitutional values.

Though the award has been around for several years now, Lear was, in fact, a front-runner since its conception. Diane Gayeski, dean of the Roy H. Park School of Communications, is responsible for planning the award ceremony and helping to select a recipient. She said honoring Lear was a long-term goal that had finally fallen into place.

“Rod Serling’s wife, Carol Serling, is always someone we consult as we develop the award,” Gayeski said. “We’ve talked with her about Norman Lear for many years. We actually extended an invitation a year ago, but Norman Lear was so busy that he was unable to come up with a date that we could work with. So we asked again this year, and it worked with his schedule.”

The evening’s ceremony took place on the college’s Los Angeles campus at the James B. Pendleton Center. It first began with a small dinner hosted by President Shirley M. Collado before the main event ─ which, in addition to honoring Lear, recognized the talent of several young screenwriters as part of the Rod Serling Scriptwriting Competition. The short script competition offers nonproduced writers a chance to display their talent and to be recognized in front of industry legends like Lear. Writer and director Eugene Ramos, whose screenplay “When Waterdrops Have Worn the Stones of Troy,” received third place. Vance Berk ‘16 received first place for his piece “Songbird on the Wire,” and David Eversole received second place for his script “Shoo, Fly.” Ramos said it was an honor to be there and have his work appreciated.

“It was great to be in the presence of a living legend,” Ramos said. “It just gave you this appreciation for the work he’s done and how he’s influenced our culture. What this guy has done is incredible. It’s kind of hard to put into words his influence on how people write television today.”

Steven Ginsberg, Pendleton Endowed Chair and associate professor at the James B. Pendleton Center in Los Angeles, coordinated the judging of the script competition. He said Lear was not only a very deserving recipient for the Serling Award but also a strikingly appropriate one. He said Lear had commonalities with Serling.

“They came from a similar generation, and they wrote in two very different genres, but their work shared a societal relevance,” Ginsburg said. “They both wrote about societal issues.”

Despite decades of constantly being reminded of his talent and influence, Lear said during his acceptance speech that he felt every bit of significance behind the Serling Award.

“He was very touched to get the award even though he’s obviously somebody who’s won probably every award there is to win in Hollywood,” Gayeski said. “Everyone really respects the work of Rod Serling, and it means something to them to win this particular award.”

Gayeski said that though this an annual ceremony, this year’s event stood out from the others thanks to Lear’s humor and energy. Lear was no more than one minute into his acceptance speech when his phone began ringing from his pocket. Rather than scurrying to mute it or profusely apologizing, he calmly acknowledged it and told the audience that he was going to take the call. Amidst incessant laughter from the crowd, Lear nonchalantly greeted his daughter on the other line. Gayeski said their conversation was incredibly entertaining.

“He talked about how, when he first got his cell phone, he told his daughters that he was always going to take their calls, no matter what it was,” Gayeski said. “It was a very funny moment because he kind of just said, ‘Hi, how are you? I’m doing well. Do you know what I’m doing right now? I’m right in the middle of getting an award!’ You can tell that the guy is still very witty, just enjoys every second of life. … It’s very hard to believe that he’s 96.”

At that age, Lear seems to have an estranged relationship with the word “retirement,” and his ACT III Productions banner has recently signed a deal with Sony Pictures Television. Serving as an executive producer of a Netflix series and an award-winning docu-series as well as developing an animated series with Nickelodeon, Lear is further cementing his influence on the world of entertainment.

Two Ithaca College alumni, Landon Van Soest ’04 and Jeremy Levine ’06, took home an Emmy for their film at the 32nd Annual News and Documentary Emmy Awards on Sept. 26. “Good Fortune” was honored with the Emmy in the category of Outstanding Business and Economic Reporting — Long Form.