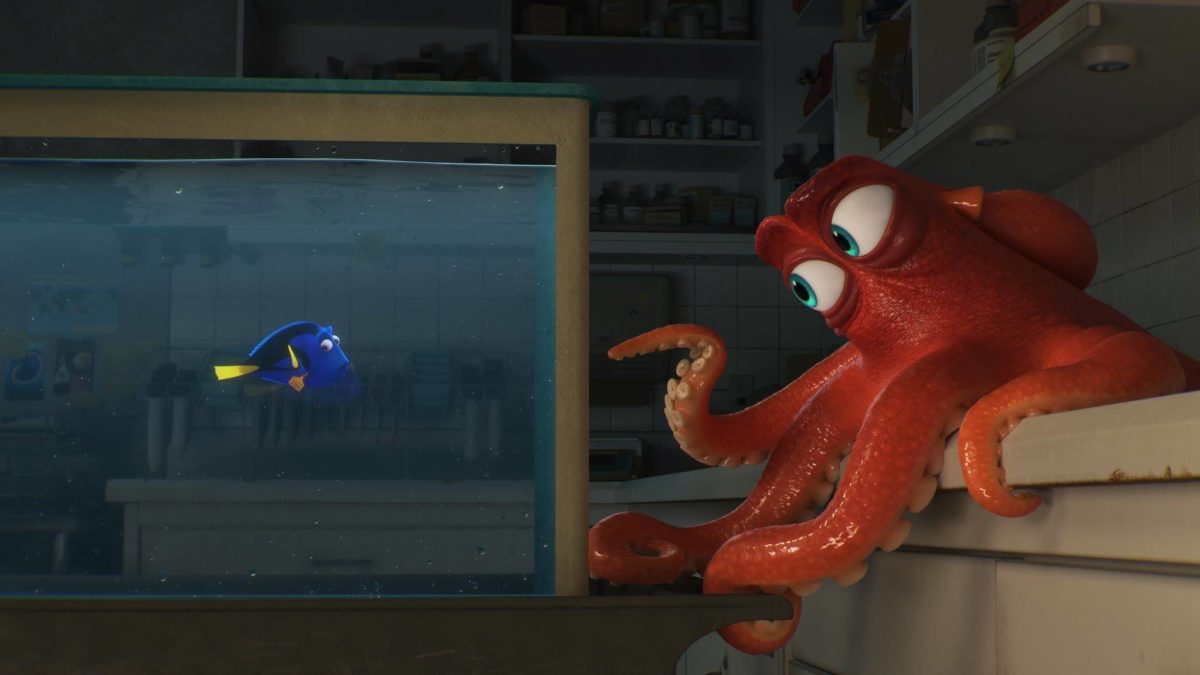 Disney/Pixar
Hank (Ed O’Neill) gives suggestions to Dory (Ellen DeGeneres) on how the duo can escape from the Australian aquarium where they were spontaneously placed.
By Jacqueline Borwick — Staff Writer
Published: August 4, 2016

When “Finding Nemo” premiered 13 years ago, it was a huge success with its colorful portrayal of the ocean world, entertaining characters and heartwarming story of a father facing overwhelming odds in search of his son, Nemo. One of the most entertaining characters in the first film was Dory — the overjoyed, passionate little blue fish who suffers from short-term memory loss. Though so much time has elapsed, Dory’s story has become relevant once again. “Finding Dory” accomplishes this seamlessly by weaving in current issues and timeless emotions.

The sequel resumes right where “Finding Nemo” ended — with Marlin and Nemo reunited and thankful for Dory’s help — offering the audience a healthy dose of nostalgia. Though aimed at younger children, this sequel is a treat for the millennial generation that was growing up at the time of Nemo’s release.

Much of the original cast is back for the sequel: Dory (Ellen DeGeneres); Nemo’s father and best pal, Marlin (Albert Brooks); Mr. Ray (Bob Peterson), a spotted eagle ray who is Nemo’s schoolteacher; and Crush (Andrew Stanton), the chill turtle who aids Dory, Marlin and Nemo (Hayden Rolence) in riding the ocean current to help direct them in their search. Some creative new characters are introduced, including the grumpy octopus Hank (Ed O’Neill), the near-sighted whale shark Destiny (Kaitlin Olson) and the Beluga whale Bailey (Ty Burrell), who has problems with his sonar vision.

Dory’s journey as portrayed in the film successfully appeals to the audience’s emotions associated with growing up, which much of the audience has done since 2003. When Mr. Ray references the process of migration during class one day, Dory — who was separated from her parents at a young age — experiences a rare flood of memories, which she uses to drive her in reuniting with her parents. In the flashback sequence, viewers see baby Dory’s eyes well up with tears and are swept up by her sadness and urgency to reconnect with her family and home.

Just as Marlin did in “Finding Nemo,” Dory goes through her own journey or self-discovery. She learns that she has a great strength that her friends admire: her courageous can-do attitude. In this sense, “Finding Dory” tactfully addresses the stigma surrounding disabilities by not concentrating or limiting her based on this handicap. Further, it’s clear that her disability is a part of her identity and that it doesn’t hinder her main objective of finding her family.

The film also directly addresses current issues surrounding sea mammals being put into captivity, which is especially timely following the controversy around Sea World that was explored in the 2013 documentary “Blackfish.” This particular issue is portrayed in “Finding Dory” in such a way as to suggest that humans are perhaps doing more harm than good in their efforts to be helpful to sea creatures.

As audience members follow Dory on her journey to reunite with her family in the wide expanse of the ocean, they are overcome with emotions of sadness, hopefulness, and contentment as Dory is aided by other sea creatures along with Marlin and Nemo. As their journey continues throughout the open seafloor, viewers react warmly to the inclusion of pockets of both suspense and comedic relief.

Overall, “Finding Dory” leaves audiences with a satisfying finish to the original story. Despite the 13 years of elapsed time, fans will be able to fall in love with the story, the ocean world and, especially, the characters all over again.