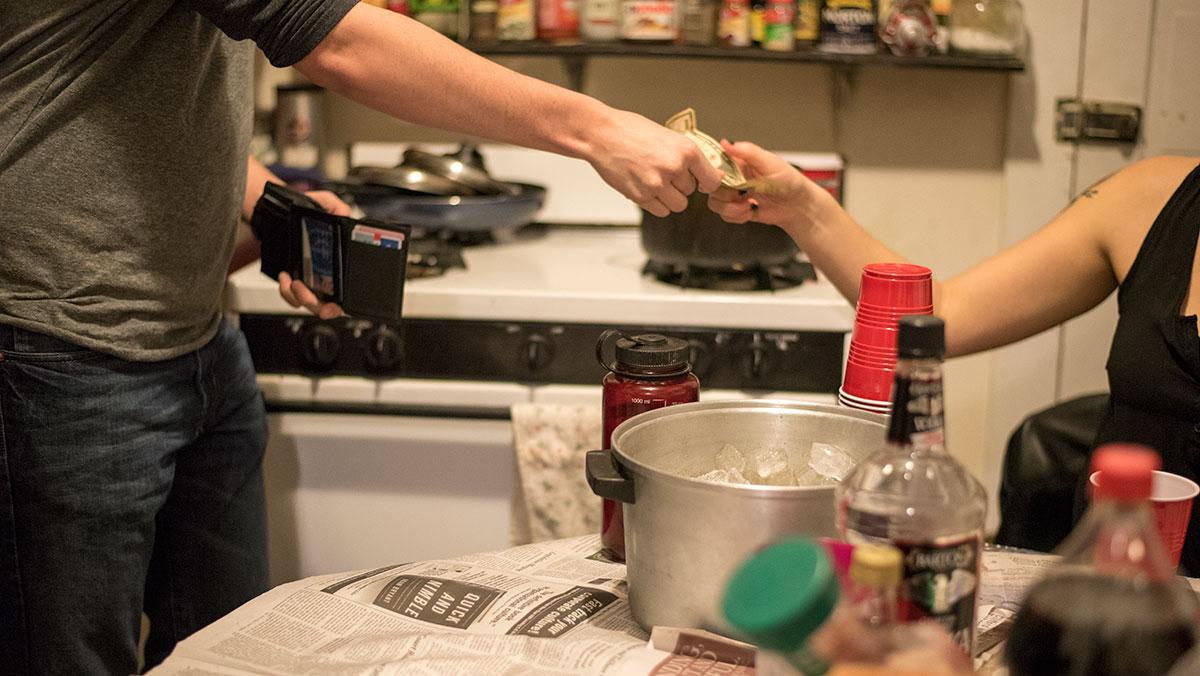 JENNIFER WILLIAMS/THE ITHACAN
Money is exchanged for alcohol during a fundrager in March. Students and organizations often throw these parties to quickly raise money for events, projects and more.
By Celisa Calacal — Staff Writer
Published: March 25, 2015

A dark room teems with bodies, moving and pulsing to the pounding beat of the music, while a crowd in the next room gathers around a table abundant with colorful bottles. The space is filled with the vibrant energy of college students, their bodies swaying to the music and their fingers loosely grasped around red Solo cups. Alcohol, a driving dance beat and the prospect of a fun night: All for the price of $5. No ID needed. No questions asked.

This scene, which occurred on a Friday night in March, is typical of the types of “fundragers” that occur year-round: parties in which attendees are charged a fee as a means of raising funds for a project, event or organization. While most fundragers charge an entrance fee, sometimes the purchasing of merchandise or a previous donation may act as a free ticket into the party. Others may also charge an additional price for alcohol, and more often than not this is done informally, without monitoring the age of the drinkers.

Junior Justin Snow, who recently threw a fundrager in February to raise money for his film “Pee-Wee,” said fundragers are quick and easy to organize.

“We figured that it’s probably the best way to make money on a college campus is to have as many people packed into one place having a good time,” he said. “So that was our goal, and everyone that came was very willing to donate.”

Because of the various media projects Roy H. Park School of Communications students work on, Snow said many of them often attend and throw fundragers to rapidly raise money for projects they must complete under deadline.

The Park School offers several grants to students working on media projects, such as the James B. Pendleton Student Research and Production Grant, which offers grants of up to $1,000. However, the timeframe for these applications occurs primarily within the spring semester, making it difficult for some students to receive the funds needed to coincide with their film’s production and shooting schedule.

Although fundraising websites such as Indiegogo and GoFundMe allow for the collection of funds outside the school, what makes fundragers a more successful and viable option for students is their ability to raise large amounts of money in the span of a single night.

“It was just so quick, and it was so easy to have people over,” Snow said. “There are definitely other ways to make money through other accounts, but we’re kind of limited because of the amount of people we have on our crew and the amount of time we have before our shoots. It was really easy to just throw a party and make our money that way.”

“You need an extra source, and when you have other people being able to come in that means that there’s another source of money there,” she said. “You’re making money, which is the goal, so you’re striving towards your goal.”

Snow acknowledged the lack of identification at previous fundragers, but said IDs were checked for “The Pee-Wee” fundrager due to the high volume of attendance.

“Yeah we did [check IDs] for this one but I know previous fundragers that don’t do that,” he said. “I mean it’s just like a process because there were a lot of kids that came that day so it was important for us to do that.”

Despite the possibility of underage drinking at these parties, oftentimes faculty members who are aware of these events may turn a blind eye to them. Lily said some theater professors are aware of fundragers due to the professors’ involvement in the department’s student-organized formals — events that are often supported by fundragers.

Regarding this notion, Diane Gayeski, dean of the Park School, said in an email, “What students choose to do outside of classes, even if it to raise funds for a class assignment, is out of the purview of any academic administrators.”

Aside from the support for students and production projects, fundragers are also used as a means to sustain student organizations. Sophia*, an executive-board member of an organization, said her group throws fundragers to maintain their status as a recognized on-campus organization.

“If we don’t have enough funding, we run ourselves at risk of losing our status as an organization,” she said. “And any occasion that we cannot have enough funds in our account, we can’t even put on the events that we would like to, which is the most unfortunate piece of it.”

“It’s just very limiting here, so the plus side is that the money you could’ve gotten on campus without so many regulations, you’re getting regardless, and you’re still being able to do the things your organization is kind of built to do in the first place,” Sophia said.

Theresa Radley, assistant director of student leadership and involvement in the Office of Student Engagement and Multicultural Affairs, said all recognized fundraisers must go through OSEMA to gain approval and follow college and OSEMA policy. However, the informal nature of these gatherings, paired with casual distribution of alcohol, ultimately make fundragers a prohibited option for on-the-books funding.

“It’s completely against policy just because of the alcohol level, and I wouldn’t recommend it,” she said. “There are so many other reasons and ways to raise money for your student organization or for a student event, so finding those ways and tapping into them would be better just because you have to think of the reputation.”

What Radley said is a fundamental dimension to a fundrager. The potential repercussions of the event could put students in hot water. However, many of the illicit activities also serve as incentives for people to attend, forcing organizers to tread a fine line between creating appeal and avoiding reprimand. Even online fundraising sites such as IndieGogo, Radley said, are prohibited for use by student organizations. Sophia said the risks behind throwing a fundrager can threaten the existence of the organization itself.

“That’s one of the most counterintuitive aspects of it, is like, we’ll get in trouble for doing something to help sustain our organization, which is something I find very problematic,” Sophia said. “We never really publicly advertise it because we don’t want to run ourselves that risk of losing our status as an organization when we’re doing all we can to keep it an organization.”

Sophia said the aforementioned regulations regarding on-campus fundraising, in combination with the SGA’s recent loss of funds, make hosting fundragers a necessity to raise the funds the organization needs.

“This has been a new thing that we’ve actually started doing because of the fact that we haven’t been able to find adequate enough of resources here on campus that would help us gain funds in a way that’s beneficial for the organization,” she said.

Despite the threat of ramifications against students, those who throw fundragers believe they offer an effective avenue to raise funds quickly and easily. Both Snow and Sophia said the promise of a good time in a nonacademic social environment, free from stress and filled with fun, gives students more bang for their buck.

“I think that especially for a college atmosphere, it’s harder to get someone to go on Facebook and take the time to go through an Indiegogo account and donate,” Snow said. “There are no benefits for that besides maybe like a poster or a DVD. There are more benefits to going out on a Saturday night and being with all of your friends at one time.”