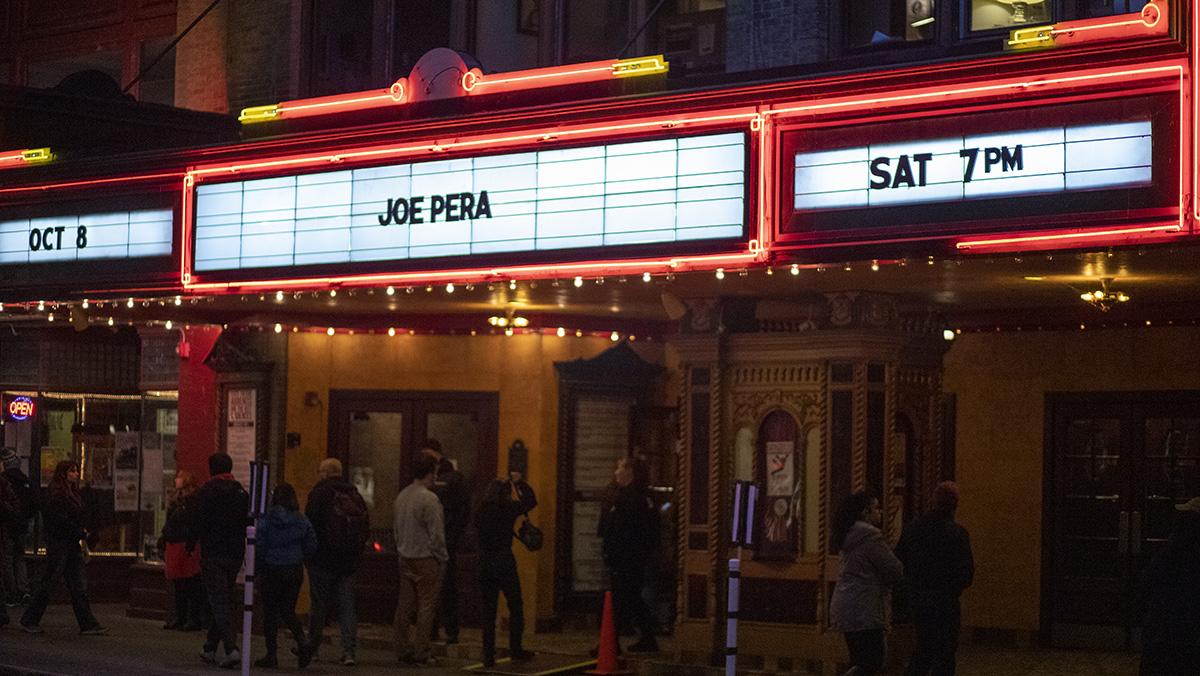 Nolan Saunders/The Ithacan
Joe Pera ’10 performed a stand-up routine at the State Theatre of Ithaca on Oct. 8. The show was part of his "Fall Everywhere Else" tour, which continues into mid-December.
By Joshua Pantano — Staff Writer
Published: October 19, 2022

After comedian Joe Pera ’10 lumbered onto the stage and took a slow sip of water, he quickly had the audience howling with laughter as he talked about squirrels eating chips, how he expects to die and making ice cubes for his friends during his stand-up performance at the State Theatre of Ithaca on Oct. 8.

Pera’s performance was a part of his “Fall Everywhere Else” tour, which continues into mid-December. Pera is most well known for his comedy television show “Joe Pera Talks With You,” which aired on Adult Swim in 2018, as well as the shorts “Joe Pera Talks You To Sleep” and “Joe Pera Helps You Find the Perfect Christmas Tree.” The Oct. 8 show had two openers: musician Ryan Dann and stand-up comedian Dan Licata. Dann and Licata worked on “Joe Pera Talks With You” as a composer and a producer respectively.

Before his time as a self-described “alternative comedian,” breaking away from mainstream comedy and joke structures, Pera attended Ithaca College and majored in cinema and photography at the Roy H. Park School of Communications. During his time at the college, he won the Ithaca College Annual Stand-Up Competition three times. After graduating, he moved to New York City with the intent of pursuing a career in comedy. With the online success of “Joe Pera Talks You To Sleep” in 2016, he began development of the television show version of “Joe Pera Talks You To Sleep” with Adult Swim shortly after.

“The first time I did stand-up ever was at Ithaca in the Campus Center with people walking through the middle, which is not the easiest performing environment,” Pera said. “Then I did ICTV, which really helped me figure out what I wanted to do.”

Pera said he feels like the shows in the “Fall Everywhere Else” tour have gotten better than they were at the start. The tour has gone through six states so far, including New York, Washington, and California. During the shows, Pera tells stories about his quiet and relatable life, ranging from sitting in the park to going on dates. He also engages with the audience by asking questions and having audience members raise their hands or yell out responses.

Junior Violet Van Buren said she is a big fan of Pera’s work and loved the show.

“I bought those tickets way in advance,” Van Buren said. “I was super excited for it and I think it was everything I wanted it to be, if not more … I thought the squirrel [joke] was really funny, [especially with] the interaction with the audience. He’s just very fast on his feet.”

Pera’s most popular aspect of his comedy is the character that he plays: himself. This exaggerated version of himself is soft-spoken, grandfatherly and fond of wearing sweaters. He takes a great appreciation of the world around him, even in the mundane or ordinary, like watching a squirrel eat a chip or filling up an ice cube tray.

“His comedy is fantastic,” Vito said. “I’ve never seen anything like it. The delivery is so … gentle. He just throws it all out there and it lands.”

During Pera’s time at the college, he said he took part in as many creative projects as he could manage. He said he participated in the IC Comedy Club and ICTV, and he made as many short films and attended as many Open Mic Nights as possible. Pera said he encourages current students to take advantage of the opportunity to create media with the resources at the college.

“I would say if you want to do film, you should be shooting shorts with your friends or whoever you can to get to work with you every single weekend,” Pera said. “Do as many small projects as you can, and if they’re not good, that’s OK. [What’s important] is just doing it over and over again.”

Sophomore Ryan Vincent said he saw Pera’s success as encouragement to students like himself.

“Seeing someone like Joe Pera go on to be successful after their time at IC is definitely inspiring,” Vincent said. “When I was choosing to go to Ithaca, a larger part of me than I would like to admit was interested in the college [because] he went there — it gave me a lot of confidence in the school since I’m in the creative arts myself.”

When the “Fall Everywhere Else” tour ends, the “Joe Pera Comedy in Ice: Winter Standup Tour” will begin Jan. 12, 2023 and continue into early February. Pera also said he might release a new comedy special sometime next year.

With a television show, stand-up tours and a dedicated fanbase, Pera said he was thankful for the opportunities that the college gave him to get him that success.

“I’m just very excited to be back in Ithaca,” Pera said. “It’s been a few years, but the school has always been supportive of my films and video making and stand-up, so I’m very appreciative of my time at Ithaca. I’m excited to come back in such a neat way at the State Theatre, which is very special for me.”