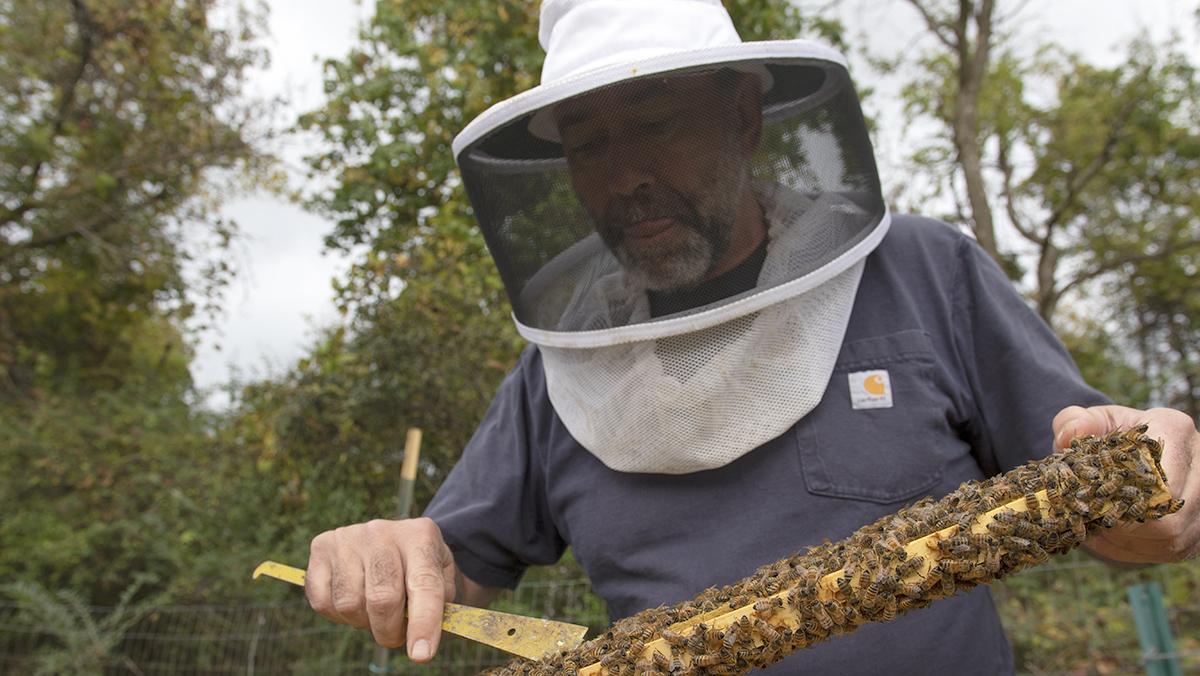 Brendan Iannucci/The Ithacan
Jason Hamilton, a professor in the Department of Environmental Studies and Sciences tends to a beehive at Bee Fest., which took place Oct. 10.
By Maddy Martin — Senior Writer
Published: October 20, 2021

Baggy white bee suits were passed around to Ithaca College students and community members on Oct. 10 as the Ithaca College apiary opened for tours at the Fall Bee Fest. Outside the apiary fence, visitors wandered through the pollinator garden playing nature bingo for honey sticks and made bee houses out of tin cans.

The festival was organized by senior Ana Maria Arroyo, junior Bethany Holland and junior Julia DiGeronimo and other students taking Jason Hamilton’s, professor in the Department of Environmental Studies and Sciences class, Ecological Applications: The Nature and Necessity of Bees. The festival gave visitors the opportunity to explore the pollinator garden, tour the beehives, buy honey and paint bee houses.

The college’s apiary is maintained by Hamilton, his students and scientist in residence, Emily O’Neil ’21. Hamilton said the apiary is the only undergraduate educational apiary in the country and creates a unique opportunity for students to work with bees and learn the basics of beekeeping. Bee Fest gave apiary students the chance to teach the community about how bees run their hives and support the local ecosystem.

“When you first get in [the apiary], put on the suit and everything, it’s so nerve-wracking because you’re so afraid you’re gonna mess it up,” Riley Burns, a sophomore environmental studies major, said. “You hear about how sensitive the hives are, how they’ll swarm sometimes, how they will sting sometimes. It took a lot of buildup for me to go in there.”

O’Neil led several tour groups into the apiary throughout Bee Fest. Prior to graduating, O’Neil was the head beekeeper at the apiary. Now she works as a staff scientist for the Best Bees Company and conducts research using the college’s apiary. O’Neil said she is currently doing a study on bee health and is working to implement research about bee nutrition and infections at Cornell University and other major universities into beekeeping practices. One of the major threats to honey bees is varroa mites, a parasite that infects both adult bees and larvae and can reproduce inside of a hive. In addition to feeding on the bee body, the mites are vectors for disease.

O’Neil also said she is testing out smart hives, digital sensors that connect to the bottom of beehives and collect data about carbon dioxide levels, acoustics and bee populations. Ideally, O’Neil said, the smart hives will be able to send information to beekeepers and warn them about any changes inside the hive.

O’Neil said she was first introduced to beekeeping during her freshman year when she was given a tour of the apiary during a class.

“That was the first time I had ever seen bees,” O’Neil said. “I didn’t really know beekeeping was the thing. [Hamilton] gave us a frame of honey and it was the coolest thing ever because we just walked around eating honeycomb, and I got hooked.”

Senior Ethan Jones is currently enrolled in Hamilton’s class and helped out at Bee Fest. Jones said he was fascinated by how bees function as a superorganism — a same-species community that reproduces and behaves as one organism.

“You have all these individual bees, but they can’t survive on their own,” Jones said. “Because not all of them reproduce, but they’re all working together, just innately. As this big organism that makes massive amounts of honey. It’s just really cool.”

Denise O’Leary ’17, a local beekeeper who worked as the head beekeeper at the college when she was a student, attended Bee Fest. O’Leary recently received her Master Beekeeper certification through Cornell and is working on creating her own business called Honey Moon Flower Lab. Honey Moon Flower Lab, O’Leary said, will be an educational business run out of her two apiaries located in Odessa, New York, on her partner’s family’s land and Hampshire, New York. O’Leary said she hopes to raise bees that are acclimated to the Finger Lakes region and help other beekeepers get their start.

“Beekeeping is a meditative experience,” O’Leary said. “When you’re in a hive, you’re having to pay attention to so many things and it’s so easy for me to get out of my head and just focus on the bees. You’re smelling all these great smells, you’re touching all the sticky wax and propolis. It’s a full sensory experience that comes with you when you come home. When I come home I smell like smoke and I feel good because I was looking at little golden workers all day.”

O’Leary said she is currently mentoring several beekeepers around the Ithaca area. Among them are hobbyist beekeepers Jennifer Irwin and John Stiteler. Irwin met O’Leary when they worked together at Just A Taste, a local restaurant. Irwin said O’Leary convinced her to start beekeeping when she was over for a visit and noticed Irwin was watching a group of bees buzzing over her flowers.

Irwin has two beehives in her backyard and says she learned everything she knows about beekeeping from O’Leary.

“It’s been great having [O’Leary] here to help me with all of the million billion questions of ‘What does this mean? What does that mean? Oh, you’re looking at this,” Irwin said. “We usually open the hives together. I’m just now getting comfortable with opening them on my own,” Irwin said. “I feel like I can interpret what they’re doing, but I need help. I’m getting better at it.”

Stiteler has kept bees in his yard for over 20 years and said he reached out to O’Leary two years ago for help with his bees after hearing his neighbors praise her knowledge. Stiteler said when his wife died a year and a half ago, O’Leary asked him if he told the bees about her death.

“She told me about this custom in Europe and the British Isles where if there’s a death in the family, especially the death of the beekeeper himself or herself, or if there’s a birth in the family, you go and tell the bees,” Stiteler said. “Because it’s not a good thing to have the bees feel like they’ve been left out of things. And also, bees fly up to heaven. So, they’re a connection. I still get a little choked up when I think about telling the bees about my wife’s passing, but it really helped me a lot.”

This article was done with additional reporting from Elijah de Castro, assistant life and culture editor.