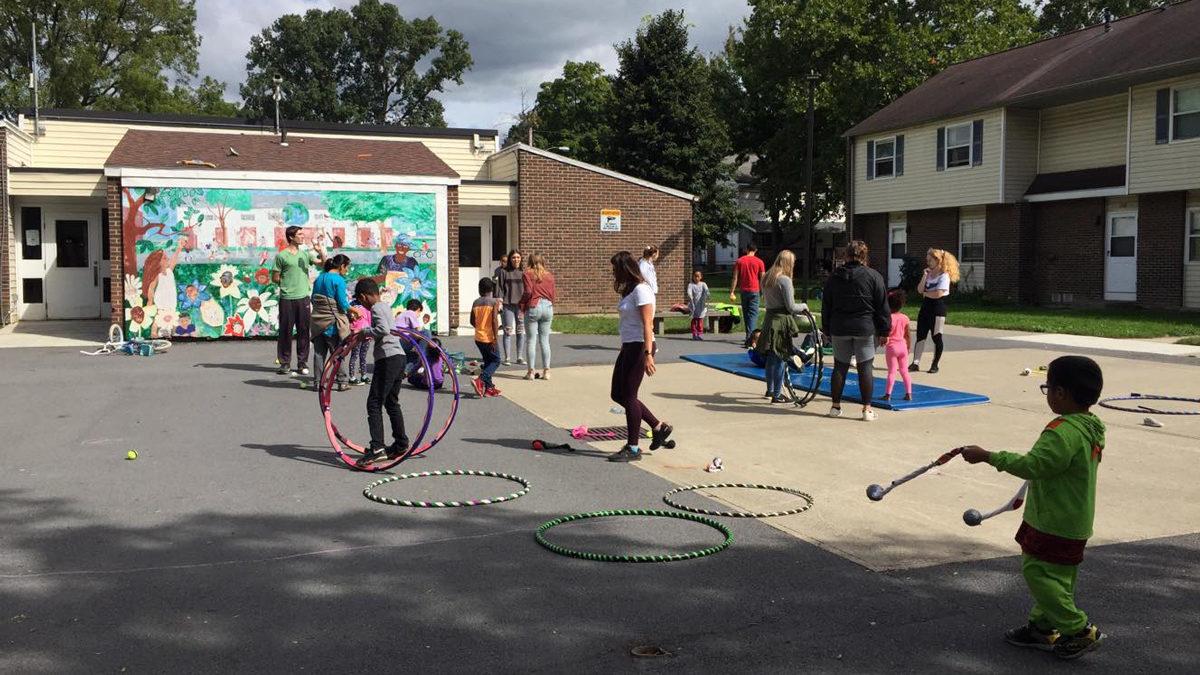 Courtesy of Kaitlyn Sevilla
Members of IC Bigs meet once a week with local children. During one program, ICircus taught tricks and provided hula hoops and other props.
By Harley McKenzie — Staff Writer
Published: October 31, 2018

When senior Riley Corcoran, Big Brothers, Big Sisters mentor, was first matched with her Little, the girl was about 12 years old. The two struggled to connect right away, but after some time, the pair formed a meaningful bond. Corcoran’s Little now introduces Corcoran to others as her sister, and Corcoran noted a shift in her Little’s overall behavior as well.

“I noticed a huge change,” Corcoran said. “When I first met her, she wasn’t really interacting in school, and she didn’t really talk to me. But now she’s very open and talking to me about things she’s experienced, which I think explains the kind of relationship we’ve developed. Her attitude about the future has changed as well, and she is now determined to go to college.”

IC Bigs is a club that assists in fundraising and recruitment for the local Big Brothers, Big Sisters (BBBS) chapter. BBBS brings together “Littles,” children ages six to 18 and “Bigs,” adult volunteers. The club also hosts volunteer Saturday programs with the Ithaca Youth Bureau. At these Saturday programs, students from the college spend two hours with local children every week.

Junior Kaitlyn Sevilla, president of IC Bigs, said that a main objective of the club is to support BBBS — IC Bigs itself does not match youth with mentors, but instead, works alongside BBBS to support the program.

“I would say our main goal is not only to volunteer for the Saturday programs but to also raise awareness about the organization on a national level,” Sevilla said. “We do a lot of outreach to try and get students to actually become a Big Brother or a Big Sister within the community.”

BBBS caters to children who live in the city of Ithaca in need of a role model. According to the organization’s website, many Littles come from low-income households and have a parent who is absent, incarcerated or in the military. BBBS and IC Bigs hope to provide some guidance to these children as they navigate through life. The impact a caring mentor can have on a Little is meant to prevent the children from engaging in unhealthy behaviors and give them a productive outlet.

Sevilla said she finds college communities especially useful for BBBS because of the positive influence a college student can have on young kids.

“Being able to give children the opportunity to see students specifically allows them to open up that possibility for themselves,” Sevilla said. “They’ll able to look at us and say, ‘I really think someday this could be me,’ or ask us questions about it. I think that being another resource for them is very influential.”

Sevilla also said that she sees a pairing between a committed mentor and a child to be an automatic benefit.

“I think anytime you have older people mentoring younger children, it’s going to be a success,” Sevilla said. “One thing that is stressed is persistence and being able to go back on a weekly basis. It provides kids with the understanding that we’re going to be there for them, that we’re going to want to be there with them. It tells them that these people care about their lives.”

Sevilla said that while BBBS aims to support the growth of a Little, both Littles and Bigs can benefit from the organization. Relationships developed through BBBS are meant to be intimate and long–lasting.

“I think that becoming a Big Brother or Big Sister can be beneficial for not only the kid that you’re paired with but also to you,” Sevilla said. “It’s something that can really impact your life. We just had a mentor panel, and Riley told a story about how sad she was to be leaving her Little, but she knows that’ll be a lifelong connection that she’s able to have.”

Corcoran describes her current relationship with her Little as supportive.

“We are very open and supportive of one another,” Corcoran said. “We struggled to click through some of the first year, but then it really blossomed. I support her in everything that she wants to do, and she supports and cares about what I like, even when it’s not what she likes.”

Since mentors recruited through the college are required to meet with their Little once a week, for at least three full semesters, managing to keep in touch over breaks can be tricky. The two become pen pals, writing each other notes each week to make up for time missed.

“I’ve been matched with her for almost three years, so breaks are something we’ve learned to navigate,” Corcoran said. “I gave her letters with stamps, along with my address. She didn’t always write back, but she liked getting information on what I was doing and getting pictures. It made it clear to her that I was coming back. Now she can text, which makes it easier to check in more than once a week.”

Due to graduation, the end of a pairing is common for students, but it doesn’t always mean the end of a bond.

“She’s kind of known the whole time that I won’t always be here, so we’ve started a transition,” Corcoran said. “But she knows that doesn’t mean we’re not sisters. I hope to visit her once a month, and when I come back to graduate in May, I hope to have her there. We’re also going to create memory journals with photos and craft stuff, providing her with a sort of closure for when I leave.”

Saturday programs aim to connect children in the area with college students, in hopes that they may have a similar positive influence. The programs also work to encourage students through the connections they make to become a Big. Both Sevilla and freshman Eve Lampugnale hope to be paired with a Little during their time at the college. Lampugnale said her time at a Saturday program helped her realize that she wanted to connect with a Little who she could mentor.

“I made what I felt were really nice connections after just one day of being there,” Lampugnale said. “I’m excited to make a connection that’s a year and a half worth of time spent together. I would definitely be a Big, for sure.”

The children who attend Saturday programs often take some time to settle in and aren’t very social right away. Lampugnale said she was happy to get one boy out of his shell for a couple of hours.

“When we first got there, the first boy who I approached, it took me a solid 20 minutes to find out what his name was, what grade he was in, what his favorite color is,” Lampugnale said. “It took a lot of prying to get that out of him. As soon as you really start listening to them, they open up. It’s incredibly rewarding when you can get them to do that.”

Lampugnale said there was a major shift in attitude toward her from the boy.

“One of them was hiding under the couch, wouldn’t come out,” Lampugnale said. “Eventually, once I got them to come out and open up, they were the same boys who asked where I was going, when I was coming back. They ran to their house and got all of their toys to show me. Once they know that all you wanna do is engage with them and be their friend, it’s really great.”

Lampugnale said she was able to let go with the children, acting like a child herself.

“It was nice to just goof around with them and get to be a 7-year–old boy for two hours while I was there,” Lampugnale said. “I remember some people were still sitting at a table making paper airplanes, and one of the boys said, ‘Let’s go over here, all the adults are at the table.’ And suddenly I wasn’t an adult anymore!”