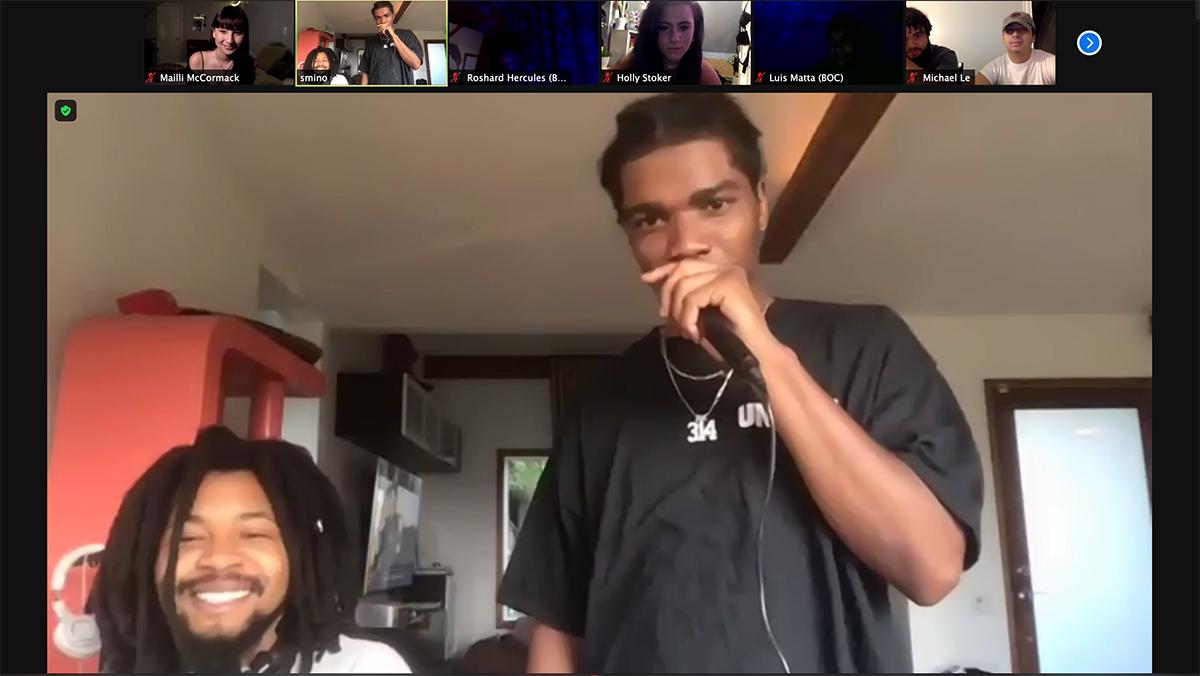 “I’ve got chicken on the grill right now, and I figured once we got done here, my chicken would be ready,” rap artist Smino said after greeting members of the Ithaca College community from his living room. The smooth rap rhythm started, and Smino picked up his mic to begin his set.

On Oct. 9, Smino, real name Christopher Smith Jr., headlined Ithaca College Bureau of Concerts’ (BOC) virtual Fall 2020 concert. Smino first came on the scene in 2017 with his album “blkswn.” Since then, he has released two other projects, the album “NOIR” in 2018 and the mixtape “She Already Decided” in 2020. Rap artist Ace Bling opened the show with songs from his newest album, “Bling Boy,” which dropped on the same day as the concert.

The free event was held on Zoom for students, faculty and staff. Approximately 36 screens tuned into the event, with several groups of students huddled around screens together. Senior Whitney Rosenfeld, BOC’s marketing director, said that BOC’s fall concerts usually have approximately 25 people in attendance. Throughout the concert, attendees were asked to remain muted but were welcome to keep their cameras on to show their reactions to the music.

Smino and Ace Bling were originally slated to perform in the Athletics and Events Center in April, but the concert was postponed when classes went online in March.

“Honestly, it was a very ominous time for us,” Matta said. “We lost our spring show. We work so hard to set these shows up. So much goes into it. … We all love working on these shows, so not being able to experience that sucks.”

Rosenfeld said Smino’s managers were excited to have the concert online in the fall.

“That at least gave us some hope in all of this, that we were still able to execute the hard work we had put into planning the event for all that time,” Rosenfeld said.

“It’s been a really fun way to learn how to market and advertise these shows, and it’s been really fun trying to find different ways to keep people engaged with the show,” Pressmen said.

“I’m just grateful for the opportunity to have that to begin with,” Swensen said. “Overall, I thought it was really great, and you could still feel his energy very clearly through Zoom.”

Because of the lack of intimacy in online concerts, senior Gabriel Gomez, BOC’s vice president, said the executive board organized a question-and-answer session during the concert to engage the audience. Prior to the concert, attendees could submit questions they wanted to ask Smino. Smino took a break from performing about halfway through the concert to answer three questions.

“In terms of an online show, you can watch somebody perform and things like that, but the real connection isn’t there,” Gomez said. “That energy you feel from the artists onstage isn’t there on Zoom.”

During the Q&A, Smino said he was in the process of working on a new album. Smino also spoke about being a Black creator during a time of nationwide calls for racial justice.

“I made a decision that it’s not about me or up to me with what’s happening to the world and all this s—,” he said. “It’s up to me and what I’m doing in my own reality.”

Smino’s phone went off while he was performing his song “KLINK.” He lifted it to the camera and complained about getting phone calls while working. The contact on Smino’s phone screen was fellow rapper JID. JID performed at the college in February 2019, and his performance resulted in a cracked ceiling in the Campus Center. A few BOC members encouraged him to answer it in the Zoom chat, but Smino put the phone aside and kept the show going.

Rosenfeld said that BOC members used to wake up at 7 a.m. the day of a concert to set up on campus. Gomez said that hosting a virtual concert was easier, but as the person in charge of setting up the stage, he longs for the early mornings and the satisfaction that comes from the hard work.

“I absolutely miss it,” Gomez said. “Instead of having to [set up], having the pride of myself and my team behind doing it, it’s like now we have the agency doing it, so it’s like, ‘All right, gang. You can just take load off.’”

Matta said he also missed the live shows, but he is grateful for the new experience of running the virtual show.

“You can’t look at new experiences in a negative way because you have to take every new experience you have as something positive,” Matta said. “You don’t learn unless you’re in an uncomfortable situation, and there’s nothing more uncomfortable than COVID, so I think we’re doing a pretty good job.”

At the end of the concert, just as Smino wrapped up his final song and was saying his goodbyes to the members of the college community, a voice off screen informed him that his chicken was burning.