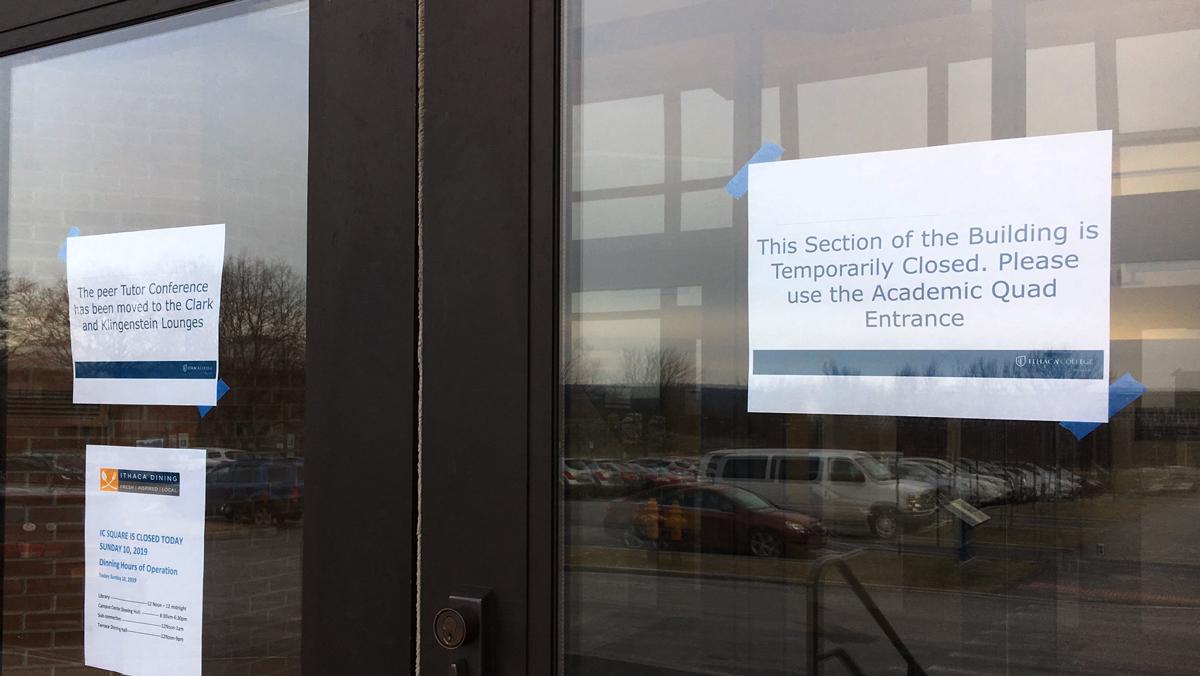 Madison Fernandez/The Ithacan
IC Square and Emerson Suites in Campus Center were closed Feb. 10 due to the damage caused at the Feb. 9 concert.
By Madison Fernandez — News Editor
Published: February 9, 2019

Damage caused to the Campus Center after a concert put on by the Ithaca College Bureau of Concerts on Feb. 9 was deemed to be cosmetic and not structural in nature.

Bill Kerry, director of the Department of Public Safety and Emergency Management, said via email that approximately two hours into the concert, which took place in Emerson Suites on the second floor of the Campus Center, a Public Safety officer noticed that the ceiling in IC Square was moving. An officer came to the stage and said that the crowd jumping in the concentrated space caused the floor beneath them to flex. Public Safety officers were on the floor of the concert attempting to make attendees spread out.

The ceiling of IC Square was flexing as the crowd jumped during the concert in Emerson Suites. Video courtesy of Jordan Stecker.

J.I.D, a rapper based out of Atlanta, was performing onstage. After Public Safety’s warning about the crack in the floor, he proceeded to perform in the middle of the crowd to alleviate the flexing of the floor. Kerry said J.I.D agreed to encourage the crowd to stop jumping.

“His cooperation and assistance was a major factor in stopping the flexing of the floor and ceiling, and in the decision to allow the concert to continue for the last 15 minutes,” Kerry said.

One for the books🔥🔥

Tim Carey, associate vice president of the Office of Facilities, said that the damage was minor and was contained to IC Square. He said that some drywall was cracked and fell to the floor, which was repaired by the Office of Facilities on Feb. 10. He said that since the repairs were cosmetic and required no additional supplies to be purchased, the cost was minimal. The affected areas, IC Square and Emerson Suites, were reopened the day after the concert.

While concerts put on by the Bureau of Concerts, a student-run group that hosts concerts for the campus community, are sometimes held in Emerson Suites, an alternative venue is the Athletics and Events Center, where events would be held on the ground floor. Kerry said that the J.I.D concert was held in Emerson Suites because it was relatively small and that larger-capacity events are reserved for the A&E Center.

“The college will be evaluating the appropriateness of using that space for future events that might include that same kind of focused dancing in such a concentrated area,” Kerry said.

Senior Elise Littlefield, president of the Bureau of Concerts, said she thinks the show went well.

“We had a successful sold-out show, where the artist delivered a high-quality performance that the audience enjoyed,” Littlefield said via email. “We are thankful for public safety and our volunteers who helped to ensure the safety of this event.”

Ithaca College’s Bureau of Concerts held its first open public forum in an effort to increase student involvement in the selection of musicians it brings in to perform on campus.

Some members of the Bureau of Concerts are questioning whether the organization will be able to host a performance in one of Tompkins County’s largest indoor entertainment venues — Ithaca College’s Athletics and Events Center — anytime soon.