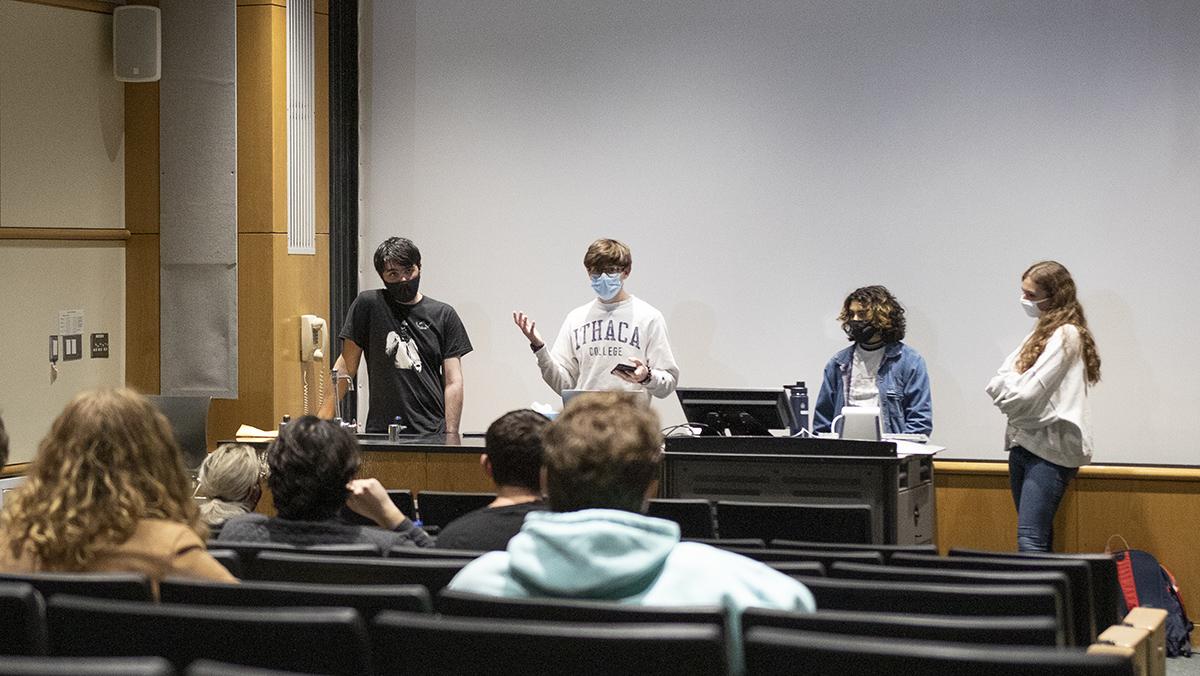 Every Friday night in the Center for Natural Sciences, the lights of a standard lecture hall fade to a crowd of 20 to 25 passionate cinephiles, signaling the start of the weekly venture into the niche world of artistic and experimental cinema.

The Ithaca College Film Society (ICFS) is a student organization that is dedicated to discussing and showing international, independent and art house films. Now that the college has returned to in-person instruction, the group meets weekly for film screenings and discussions that tackle a number of topics. Each screening is based on a theme that the group’s three presidents — senior Bailey Rye, junior Gabriel Evans and sophomore Stephanie Tokasz — choose. Each theme has three corresponding films, which are usually chosen from unique genres like film noir and stop motion, and weighty topics like feminism, religion and existentialism. This year’s first theme of queer cinema recently finished with a screening of Toshio Matsumoto’s “Funeral Parade of Roses.”

The club met for the first time in February 2020 with a screening of Paul Thomas Anderson’s “Punch-Drunk Love.” Two more in-person screenings took place before campus was shut down due to the COVID-19 pandemic. From there, the ICFS continued to screen its films via Zoom, with the exception of a socially distant in-person screening of “A Girl Walks Home Alone At Night” in the spring, which featured a Q&A with the film’s director Ana Lily Amirpour in April 20201.

Evans said the ICFS saw very low attendance numbers when it had to move to Zoom, despite having an email list of nearly 200 students. They said some screenings consisted of just the presidents watching films by themselves.

Freshman Zac Sultzer was a frequent participant in the ICFS Zoom screenings.

“I attended the ICFS Zoom screenings during my year of deferment in late 2020, early 2021,” Sultzer said. “They were an excellent way to connect with the film buff community at IC during such a confusing time. I’m very glad I experienced unique movies like these over the Zoom venue with the ICFS that made screenings possible during a time when they wouldn’t have been otherwise.”

For students who did attend the Zoom screenings, like many other people, film was a way to escape the fear and uncertainty the world was experiencing amid the COVID-19 pandemic, and the screenings connected film students to their passion when they could not do so on campus.

Rye said being back in person has brought the usual digital attendance of six or seven people up to about 20 attendees per screening. Freshman Tyler Dale said he has attended all five screenings the film society has held this semester.

“I think what they have going on here is great,” Dale said. “It’s really nice to take some time to come out and watch some movies I haven’t seen.It really exposes me to a lot of really amazing movies, and the themes they explore are so provocative and really make you think.”

The themes explored by the ICFS, while often meaningful, are usually chosen at random.

“I don’t know if we have a set method of how to decide on them,” Evans said. “Usually we’ll think of a genre, sociological topic or political topic and attach that to art house.”

Art house refers to films that most adhere to a filmmaker’s artistic vision, usually aiming toward a niche market as a result.

The ICFS presidents said they often look to the internet to find films, with Letterboxd and Wikipedia being common sources. However, the three knowledgeable film buffs often have films in mind when coming up with themes. As for locating physical copies of these films, they said they look to the college library’s vast cinema collection, as well as copies from their own film collections.

“We’ve had conversations in the past where we have realized certain films we have considered are actually on the syllabus for certain film classes,” Rye said. “We were considering ‘Daughters of the Dust’ until we realized it was on the Hollywood and American Film syllabus. We try to avoid crossover, not with themes but with specific films.”

According to the Ithaca College website, the college is home to 1,435 students in the Roy H. Park School of Communications. This body of students studying multimedia and entertainment creates an optimal environment for hosting organizations like the ICFS.

“We had a massive turnout at the org fair,” Rye said. “I am so impressed with how many people came to our table and were actually interested. As the semester goes on, more and more people will get busy and won’t be able to show up to these types of things, but as of right now we are doing really well.”

The ICFS does most of its advertising through posters around campus. Evans said he designs each poster to convey the aesthetics of the film and highlight the theme the club is currently exploring.

“I don’t want to sound pretentious,” Rye said. ”But there’s just something about a film society and being in the space of a college, that you have access to all these people and all these films.”

The presidents said the film society has been aiming even higher than its usual weekly screenings, looking to expand its intellectual conversations by incorporating guest speakers.

“The writer and director of ‘A Girl Walks Home Alone at Night,’ Ana Lily Amirpour, she’s a pretty big up-and-coming name,” Evans said. “So why not shoot higher and go for an even bigger name?”

As much as the presidents talk of the club’s possible venture into guest speakers, they said their main priority is providing high-quality weekly programming. They said on top of the possibility of frequent guests, they have also discussed the possibility of hosting a film festival, an idea that even the former presidents, who have since graduated, tossed around.

“How does a student-run film society gain recognition? It’s because they do stuff like that, Evans said. “They get guest speakers and they put together their own festivals.It’s an ambition that is a bit daunting.”