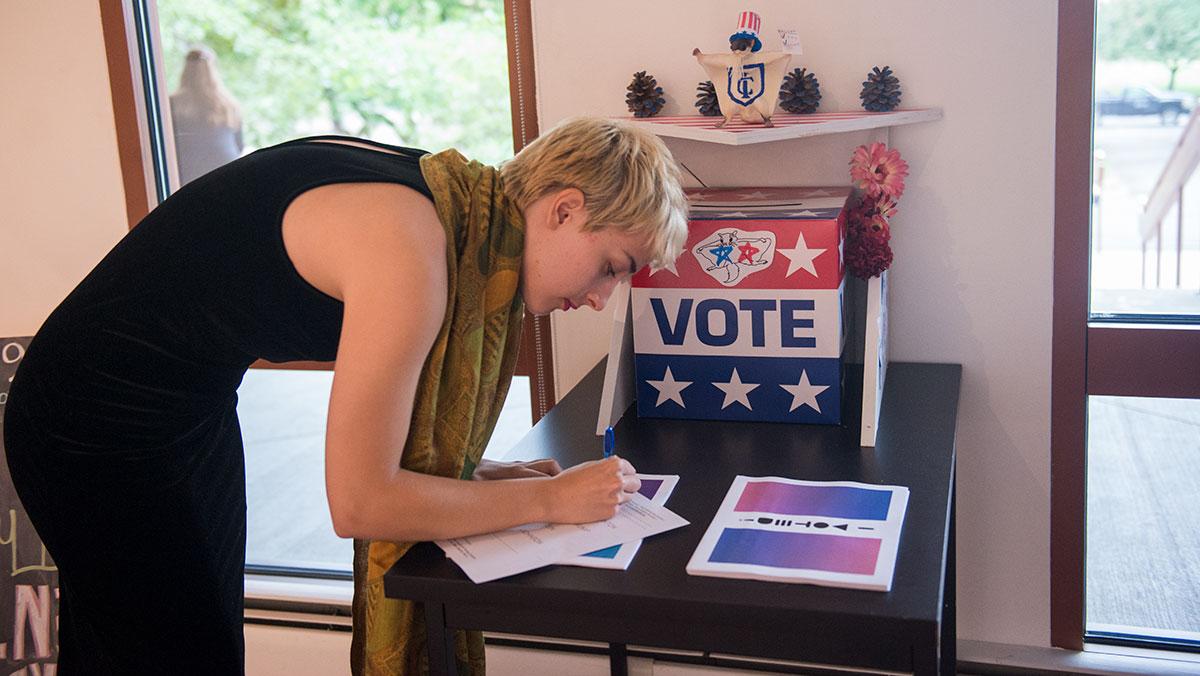 Sam Fuller/The Ithacan
Sophomore Anna Gardner, one of the student collaborators for the project “Official Unofficial Voting Station: Voting for all who legally can’t” took her ballot to the polls Aug. 31 when the piece opened. The station will be up until Nov. 8.
By Taylor Zambrano — Life & Culture Editor
Published: August 31, 2016

As a nonresident of the United States and a citizen of South Korea, artist Aram Han Sifuentes, instructor at the School of the Art Institute of Chicago, must file income tax returns and report her income to the IRS and state taxing authorities. She is expected to support the democratic form of government that the U.S. upholds, according to the U.S. Citizenship and Immigration Services. However, she is not allowed to vote. Those who are ineligible include noncitizens, youth under 18, those without any proper form of identification, and felons and ex-felons — but only in some states.

On Aug. 31, the Handwerker Gallery debuted Sifuentes’ most recent project, “Official Unofficial Voting Stations: Voting for all who legally can’t,” which was inspired by her inability to vote due to her citizenship status. The nationwide project is featured in Chicago; Baltimore; Washington, D.C.; Philadelphia; Ithaca; Detroit; and Oaxaca and Chiapas in Mexico, where Sifuentes collaborated with artists, radical thinkers and organizations. Each station has a creative theme based on the collaborating artist’s interpretation of the project. Chicago, for example, is disco themed; in Mexico, a doctor-themed station requires its participants to drizzle fake blood on their ballots before submitting them.

One of the student coordinators on the project, sophomore Anna Gardner, said Mara Baldwin, director of the Handwerker Gallery, suggested the concept of making the Ithaca voting station flying squirrel–themed. This idea stemmed from the college’s 2011 vote to choose a new mascot. The choices were a phoenix, a flying squirrel and a lake monster, but the results of the vote did not end in the creation of a mascot.

“It’s kind of like a shrine — an ode to failed democracy because I was looking this morning — I have the website still up from it — and I think that the president’s official statement was saying that a majority of students, faculty and alumni wanted this change,” Gardner said. “The minority was so passioned against it that [the president] didn’t want to make it divisive for the whole college.”

Gardner said the only people who didn’t want a mascot created for the college were alumni who graduated 40–50 years ago. She said the flying squirrel theme is meant to incorporate the democratic process at the college into what the project is saying for disenfranchised voters for the general election. 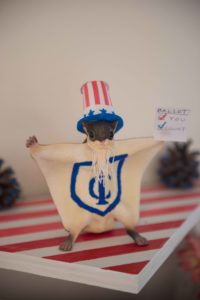 The flying squirrel was chosen as the “unofficial” mascot for the purpose of the “Official Unofficial Voting Station: Voting for all who legally can’t.”

The voting station is located in a corner of the Handwerker Gallery near the main entrance among the pieces hanging for the upcoming exhibition, “Sun Flare.” The ballot box is decked out in red, white and blue, with the word “VOTE” written across its sides. Above it, located on a small perch, there’s a flying squirrel figure holding a mini ballot.

Sifuentes said she was inspired to create “The Official Unofficial Voting Station” while working on her other art projects, many of which draw upon her experiences of inequality as a noncitizen. For the past four years, she has been working on a citizenship project that was originally inspired by colonial needlework. Sifuentes noticed an odd parallel between colonial America and current America in the way that immigrants were treated in the country. She said noncitizens put on a show of worth every time they take the citizenship test, similar to how a colonial needlepoint showed the worth of the young women who made them. To display this through art, she had noncitizens submit designs for each of the 100 questions and answers from the U.S. naturalization test. Using needlepoint, she is working on combining the designs and plans to sell the completed work for $680 — the cost of applying for full citizenship.

Looking at her project, Sifuentes said she thought about how she cannot vote in any elections and how this poses an issue because the majority of the discussions in the upcoming presidential elections concern immigration.

“I’ve never been able to vote anywhere, and not being a citizen is my choice, right?” she said. “Legally, I have been able to apply. However, I’ve been waiting for South Korea to allow dual citizenship, and that just hasn’t happened.”

Sifuentes began her project in Chicago at the Jane Addams Hull-House, and then she branched out. When she discussed the Ithaca project with Baldwin, she really wanted it to represent its community, especially the college’s students.

“We talked before, and there’s a lot of international students in Ithaca, and there’s more of a student population, of course,” Sifuentes said. “We were talking about that and how it would be interesting to get those votes from those communities there.”

Baldwin said when Sifuentes asked if she would like to collaborate on the project, the answer was a no-brainer.

“This year, especially leading up to the election, a lot of issues discussed in the elections are ones that students on campus could connect with, talking about trying to change and having dialogue about it,” she said. “The ballot is not constrained to what our two options are.”

Sifuentes said she included a write-in section of the ballot because she wanted the space to be about inclusivity — a “democratic space.”

“They have the option to write whoever they want, and that’s as important as picking a candidate that’s already there,” she said. 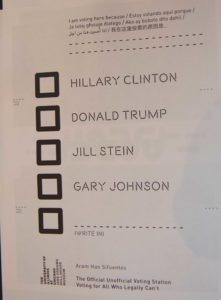 The ballots included five options to choose from, including a fill-in spot for voters to choose their own candidate.

Beginning with the Handwerker Gallery, each city’s station will be open until Nov. 8. On that day, all of the stations will close, except for the one located at the Jane Addam’s Hull-House. That ballot box will turn into a station for written recommendations, where letters with suggestions can be sent to Chicago’s mayor as well as the future president of the United States. At that point in time, the suggestion box will remain open until March, when all the letters will be sent out.

Sifuentes said even though the station hasn’t officially opened, a few ballots have been collected in Chicago. The final ballot count will be found on the Jane Addams Hull-House Facebook and Instagram account, which she will be taking over.

Junior Michele Hau, the other student coordinator working on the project, said she noticed an issue among voters who have the privilege to vote but don’t necessarily take advantage of that privilege. By the same token, she said those people who don’t have a voice are the ones whose lives are being discussed the most.

Hau said students in particular choose not to vote for logistical rather than ethical reasons, which is something she said she hopes this project will change.

“I think this project really tries to make it a larger macro scale in the way that it really tries to provoke people to think more abstractly and broadly about what the implications of voting actually are,” she said. “I think it’s also important for us to be on a college campus and for us to have good conversations about what it means to be a citizen and what it means to be an active participant in different types of communities.”