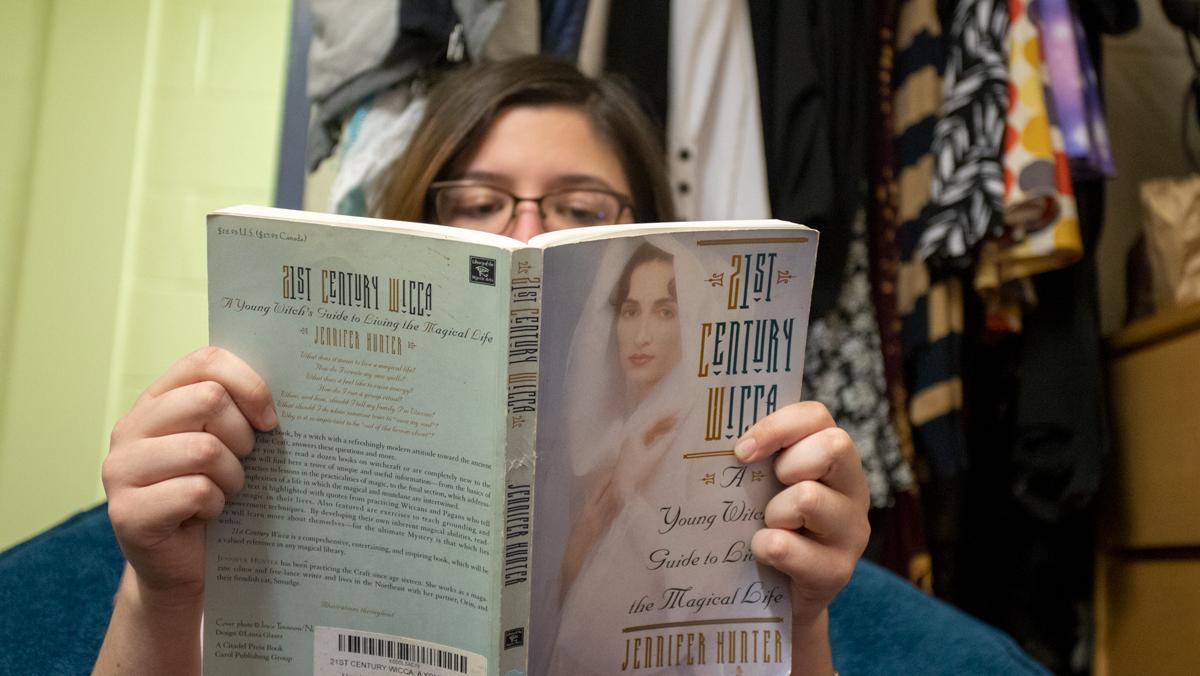 As Halloween approaches, imagery of black cats, pentagrams, candles and witches riding on broomsticks is portrayed in shop windows and advertisements. From movies like “The Craft” to “Harry Potter,” the mention of paganism, Wicca or magic conjures up images of fantastical spells and unrealistic results. However, these stereotypes do not truthfully represent Paganism — a centuries–old group of religions.

Paganism is an umbrella term that describes earth-based religious practices with ancient roots outside of major world religions like Christianity, Judaism, Islam, Hinduism and Buddhism. Although there are many different ways to identify as pagan, there is a particular emphasis on nature worship. Some pagans may believe in multiple deities, like Hellenistic or Celtic gods, especially from pre-Christian times. They may worship a single god or goddess or not worship a deity at all.

Sophomore Samantha Brandal, treasurer of IC Pagans, said she feels connected to paganism because of the freedom it allows her to explore spirituality.

“What it is to me is kind of a religion free from the harsh rules and boundaries., she said. “… Religion is what you make it, and it’s personal and it’s different for everybody.” 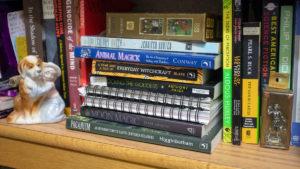 Register has a collection of books on witchcraft, paganism and magic. (Elias Olsen/The Ithacan)

IC Pagans is a faith organization on campus for those who want to explore their different beliefs, whether they consider themselves broadly pagan, like Wiccan, Druid or even Satanist, or any other kind of religion. The organization was formed to provide a community for pagan students, and allow others to better understand the religion whose only exposure to paganism or magic has been through media like “Sabrina the Teenage Witch.”

Racquel Belkin ’18 founded the organization in 2015 as a place to be open with other pagans.

While the group does have the umbrella term of pagan, members do not necessarily have to consider themselves pagan to join the group. Senior Margot Register, president of IC Pagans, said the differences in the group is what the members discuss most.

Because paganism is so broad, there are many different kinds of ways people can practice. Register said she considers herself an “interfaith pagan” because when she was a child, her parents described their religion as interfaith, which is the belief that no religion is entirely infallible, but every religion has some truth to it. She said that although she grew up in a conservative Christian area, her family gave her the opportunity to explore her own religion for herself.

“The way my parents raised us was very pagan, like the thematics of understanding the Earth and the universe,” she said. “We were allowed to explore our other options in an area that very much wasn’t.”

Register said she explores the mythology of other cultures in the past and adopts what she values from each one.

Brandal said she was raised Christian. She said she identified as an atheist for a brief period of time but went on a study trip to Greece and learned many people still identify with ancient, Hellenistic beliefs. She began identifying with Hellenistic Paganism before incorporating Celtic deities into her faith as well.

Brandal identifies as a druid, which she described as a stricter form of Celtic Paganism that worships deities from the Celts of ancient Ireland, Wales and Scotland. She said that being part of IC Pagans helped her to feel that her faith was legitimate in a world where major religions dominate spiritual beliefs.

Belkin said she was raised Jewish and discovered paganism from a book in her library. She became interested in Wicca, and then said she reconnected with Judaism again, she combined the two practices.

“When I connected with Judaism again, I didn’t really feel the need to get rid of Paganism because it was part of my religion as well,” she said.

“There are students that see themselves in multiple spaces.,” Osorto said. “We should be able to know that and highlight that.”

One of the more common perceptions of pagans is that they cast spells and hexes. Some, though not all, pagans do practice magic but not in the wand-waving way described in media.

“I do practice magic,” Register said. “Magic is different for everyone, but for me, it equates to passion and setting. You know, your little section of the universe that is you and interacting with that in a way that’s not exactly physical or obvious.”

Magic is highly individualized. It can take the form of simple practices, like meditating or even cooking with mindful intention. It can also consist of more formal spells that can include burning candles, reciting words or visualizing a goal. Register said her practice of magic includes making art.

“That for me includes a lot of art, a lot of drawing, … thinking about what I want things to be,” she said. “If I want confidence, I’m giving myself a little doodle for 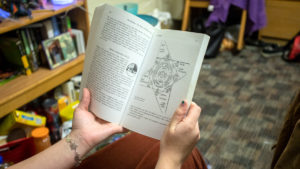 Some pagans honor this calendar of rituals and holidays that are often inspired by ancient religions. (Elias Olsen/The Ithacan)

Magic may also include forms of divination. Brandal and sophomore Nora Foster both use tarot cards. Each card has a meaning, and they can be organized in different spreads, or layouts, that can provide insight into situations. Brandal said that divination through tarot readings helps her connect to the religious aspects of her faith.

“One of my deities is Apollo, and he is the god of prophecy,” she said. “So that’s a way for me to honor him in my daily life.”

Many pagans also have altars. Brandal has a personal altar she keeps in her dorm room. Register has an altar with crystals, a mirror, a cloth and cat figurines, which she says have special meaning to her.

“Cats with witchcraft has become a common symbol, and it’s something that I actually really like,” Register said.

Cats are associated with witchcraft in popular culture, but other aspects may not be treated as seriously. Register said that pop culture has made paganism and witchcraft seem trendy, especially with the significance of crystals.

“That’s interesting and totally valid, but this is a religion for me,” she said.

Along with discussion, IC Pagans works to reduce the problems of cultural appropriation in paganism. Some white pagans take sacred rituals from other cultures, particularly from people of color, and adopt them to their own practice disrespectfully.

Register works with familiars, or spiritual animal companions. She says this practice is different from “spirit animals,” a term that has been appropriated from indigenous religions and used in an unsacred way. She said she makes sure not to use the term or follow the practice because she does not have a right to indigenous culture. To combat this and other instances of appropriation, IC Pagans hosted informational events such as “Ask-A-Witch,” during which students were welcome to ask members of IC Pagans about their beliefs and practices. Foster has also led cultural appropriation workshops.

Osorto said he attended the community’s “Ask-A-Witch” event, where he learned about how varied people’s beliefs within the group are.

“I had some really good, interesting conversations and got a sense of how diverse they are within their community too, and the kinds of ways that they are trying to provide people with resources to think for themselves about what opportunities exist if they are interested in the very diverse community that is Pagan,” Osorto said.

IC Pagans worked on moving its space to Muller Chapel to have a more stable environment for meetings, discussions and rituals. The group has been working with Osorto to gain more recognition as a legitimate religious community at the college and is part of the Interfaith Council. Osorto said the chapel has been used most by the active Jewish, Protestant and Catholic communities at the college, and he wants to make it a more inclusive space for people of all faiths to convene.

“When you walk into a space like Muller Chapel, people should feel a sense of awe and wonder and should feel that this is what it feels like to feel welcomed,” Osorto said. “And there’s some work to do on that because the chapel has been the home of three communities for a very long time. And so part of what I get to do is to think with these communities, how do we work together to towards expanding whose home this is.”

Register said the number of members in IC Pagans has increased over the past year. The group will be holding open rituals for pagan holidays and invites students on campus to attend meetings to learn. Register said another goal of the group is to make pagan students feel comfortable in their faith, even if they’re not a part of the organization.