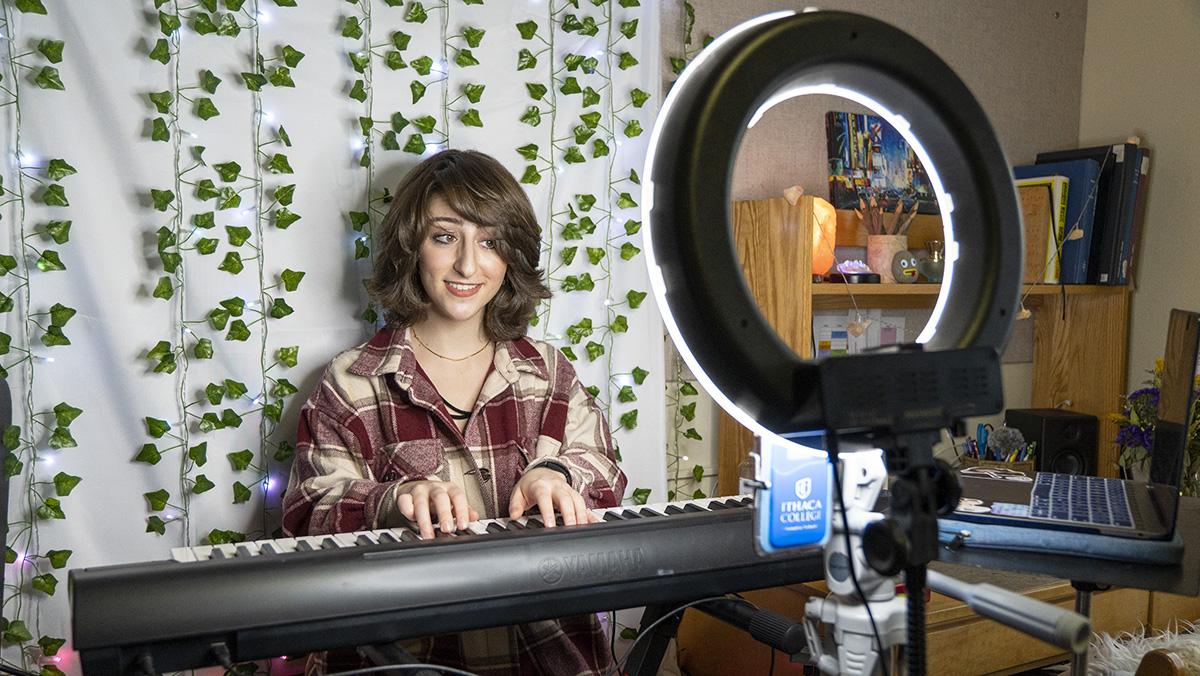 Leila Marcillo-Gomez/The Ithacan
Pursuing a Bachelor of Music with a focus on voice in the Ithaca College School of Music, Chalnick has garnered a TikTok following of over 990,000 through her unique songwriting challenges, skits and singing videos.
By Natalie Tribiano — Assistant Life and Culture Editor
Published: February 24, 2022

The last thing junior Alexa Chalnick expected while sitting in her car waiting for her allergy appointment was to be an iHeart radio award nominee for Best TikTok songwriter. What started as simply posting singing videos to TikTok has led to an opportunity to be a part of a nationally recognized award show.

A couple weeks prior to the nomination, iHeart radio, a radio station that is part of the largest radio broadcaster in the U.S., messaged Chalnick on Instagram asking her to email a photo of herself to use in an announcement. Having not the slightest idea what it was for, Chalnick sent iHeart radio a headshot. Then Jan. 27, she learned about her nomination through an Instagram post.

“I was absolutely shocked,” Chalnick said. “Past Alexa worked really, really hard during the quarantine and she was pushing so much content out.”

Pursuing a Bachelor of Music with a focus on voice in the Ithaca College School of Music, Chalnick has garnered a TikTok following of over 990,000 through her unique songwriting challenges, skits and singing videos.

Her mother and music teacher, Sheri Chalnick, was beaming with pride after finding out about her daughter’s nomination. Chalnick was mid-instruction when she received a call from Alexa Chalnick and placed her on speakerphone to announce her iHeart Radio award nomination. This led to the whole class exploding in cheers.

“I was so over-the-top excited for her because she had worked so hard all during COVID-19 trying to make something to help other people,” Sheri Chalnick said. “She created a platform so people could be artistic and continue to do what they loved to do.”

Being an online persona wasn’t always the goal for Alexa Chalnick. She was fearful of being her own worst critic and previously opted out of uploading anything online. That was until near the end of her senior year of high school when she lost her voice. Suffering a severe respiratory infection leaving one of her vocal chords slightly weak, Chalnick found herself feeling extremely discouraged.

“I mean, my voice was my everything, it was how I expressed myself.” Chalnick said. “And here was this idea that [my voice] wasn’t perfect anymore. That hurt.”

This mental shift of accepting her voice proved to be an opportunity for Chalnick. She uploaded her first TikTok video during her freshman year of college. Initially, she just wanted to showcase her passion online in an informal setting and was relieved of the daily pressure she put on herself

Chalnick’s voice began to recover and is now at the same, if not higher, level than it was. Her page’s growth came in waves, but there were certain videos that would go viral, causing her channel to skyrocket in followers.

Junior Jaden Levine, music major, has been close friends with Chalnick since their freshman year. Being by Chalnick’s side since she began her TikTok page, Levine said he feels proud of how much Chalnick has grown.

“I remember her saying how she was comfortable [singing] classic and golden age musical theater…but during the pandemic she really was a lot more comfortable belting,” Levine said. “I think the coolest thing is seeing her create music to a whole different level.”

While scrolling through TikTok, Chalnick saw a video of someone singing a musical but would leave certain words out for someone to duet and fill in the blanks. This inspired Chalnick to make a singing duet challenge, but instead of it being a musical song, it would be an original piece she wrote.

Chalnick created “Sing for Alexa Saturday” during quarantine, which was a response to Broadway community members being unemployed and relying on holding lessons through Zoom. She would have people audition via TikTok by duetting her videos of them singing. Chosen individuals were able to perform on a Zoom call each Saturday in front of Chalnick and a Broadway performer or someone in the music industry. This allowed her to work with big names in the industry like Dan Povenmire, creator of “Phineas and Ferb.’  Being a fan of Chalnick’s work, Povemire asked her to co-write a song with him for a new Disney channel show. They met on a Zoom call and within an hour, the duo had produced a song.

As for what’s next, Chalnick has written upward of 50 songs that have remained unreleased, and says her next goal is to share her music with the world.

“I have some plans up my sleeve as to how I’m going to release the songs.”  Chalnick said. “So I guess you can say: Look out for Alexa!”