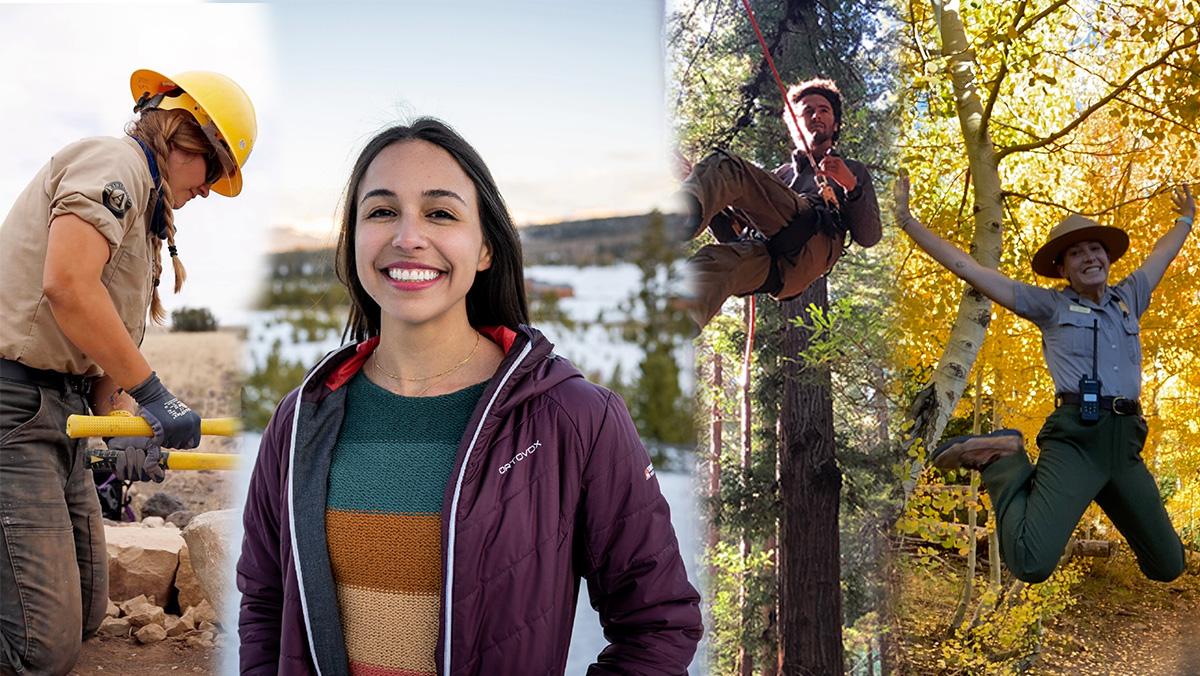 One night last summer, Lizz Eberhardt ’21 found herself carrying a man in an outdoor rescue stretcher up the edge of a cliff in an active rockfall zone. Eberhardt, who worked as a visitor services ranger in Zion National Park in Utah, was called to respond to a medical emergency with a group of 12 other rangers at 5 p.m. Once the rangers got to the trailhead, they received a call that the patient couldn’t be found. Instead of following the classic safety rule of staying put, the patient had begun climbing down a closed trail and into a rockfall zone. By midnight all the rangers made it down the mountain and the patient was cared for.

“By the time I got home it was about 4 o’clock and I had work at 5,” Eberhardt said. “I got about half an hour of sleep. And that is why I really like to educate people about hiking responsibly.”

Although most days working in a national or state park aren’t as turbulent as Eberhardt’s “favorite search and rescue story,” the parks offer rewarding and often adventurous post-college jobs to many Ithaca College alumni. Working as a trail technician or interning in a park can serve as a stepping stone into a larger position in the field of conservation or interpretation. Or the work can fulfill a sense of wanderlust and show some grit on a resume.

From April to September 2019 Paul Corsi ’15, who graduated from Ithaca College with a bachelor’s in environmental science, lived in a campsite and hiked miles every day to do maintenance on trails in Yosemite National Park in California as part of the Backcountry Trails Program –– a special program in the California Conservation Corps, in which participants spend at least five months working on trail maintenance and construction in national and state parks in California. Corsi said he joined the program because he was looking for an adventure and had always wanted to see the West Coast.

“Their slogan was ‘hard work, miserable conditions and more,’” Corsi said. “I loved it. I felt like a cowboy every day.”

Corsi said the Backcountry Trails Program would also organize challenges for its workers to partake in. Among them was the 24/50 challenge, during which participants would hike 50 miles around the Clark Range in 24 hours.

“Toward the end, we were falling asleep hiking,” Corsi said. “In the beginning we had an easier route and then around midday we had to climb over the mountain and go through Red Peak Pass. As we got over it on the northern side, it was completely snowed over. So we had to spread out searching for the trail.”

Corsi is currently attending Cornell University to get a master’s degree in public affairs.

Madeline Mathers ’19, who graduated from Ithaca College with bachelor’s degrees in environmental studies and television-radio, is an assistant park ranger for the New York State Department of Environmental Conservation in St. Lawrence County. Her primary role is to educate people about the environment they are in, but she also responds to medical calls and patrols recreational areas. When the parks are in season, Mathers spends much of her time hiking on trails and patrolling campgrounds to make sure people are following the rules and to answer any questions they have.

“When people are genuinely interested in where they are, I get really excited,” Mathers said. “I’m hoping that when I impart my knowledge on them they will pass it off to somebody else and generate a good generation of responsible and sustainable hikers and outdoors people. I want to educate people to utilize our resources in a positive way, not exploit them.”

Mary McKean ’15, who has a bachelor’s in environmental studies from Ithaca College and a master’s in public administration from Cornell, is a projects specialist in planning for the National Parks Service at their national office in Colorado. McKean works with federally-owned parks across the country to help plan out the construction, demolition or rehabbing of streets, buildings and other facilities. She also works on special resource studies to locate potential sites that could become a park.

Right now, Congress is looking to create more national park units that tell the story of civil rights in Mississippi. McKean’s specific job is to look at the feasibility of specific sites by examining the property, speaking with property managers and communicating with the local community about how they feel about the site becoming a park. McKean’s research will become part of a report that goes to Congress to help it make its final decision.

“You have to remind yourself that you’re a very small part in the process,” McKean said. “So you do the best you can to come up with accurate information and state the preference of the people who live there and are connected to the story. You want to empower the story and the people.”

“One of the biggest things for me is giving people access to the places that I love,” Maistelman. “I feel like everyone should have the opportunity to see these places and not a lot of people do, unfortunately. Making the trails accessible and being able to give back to the [hiking] community was huge for me.”

“[Park ranger] is one of those professions that attracts the people it’s meant to,” Eberhardt said. “It doesn’t matter what you studied formally. A lot of it is your passion for it and how much you care.”

McKean said one of her core values is making sure people have the same access to nature and the ability to experience the outdoors. After graduating, McKean worked in environmental education running programs for children to learn about the environment at camps. However, McKean said she realized many of the children she worked with were privileged and there were many kids who didn’t get the chance to experience the outdoors. Even if the programs were free, transportation was still an obstacle for many families. In addition to her work for the national parks, McKean is volunteer director of Operations of Rising Roots, a nonprofit that rallies for environmental equity.

“Knowing the impact that my connection to nature has had on my life, I really want other people to feel that connection,” McKean said. “Not necessarily experienced it in the same way I do but to have opportunities to experience it in their own way.”

Editor’s Note: Lizz Eberhardt ’21 was a chief copy editor for The Ithacan.