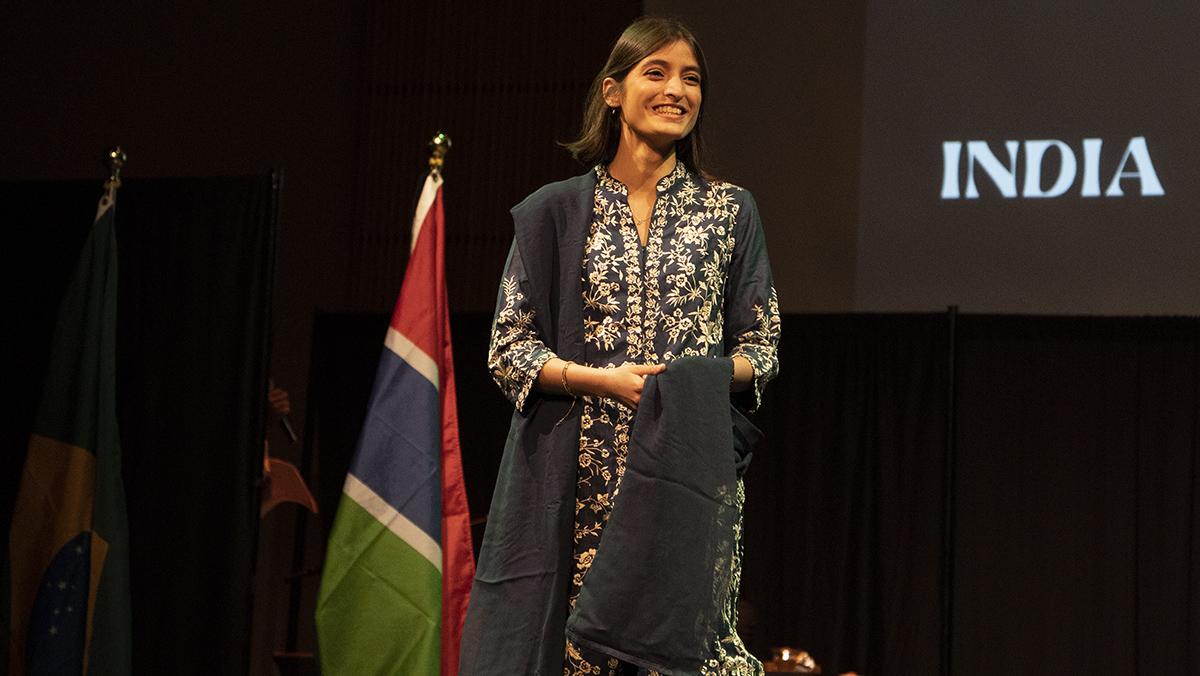 National flags of various countries decorated a dimly lit Emerson Suites as students gathered around high-top tables and sipped mocktails. The crowd cheered as the emcees walked down the catwalk, ready for this year’s Inter-Fashional Night to begin. Some models spun across the stage in colorful, twirly skirts while others strutted in flowy dresses to the booming soundtrack of genres from around the world.

This year’s theme was, “International Cocktail Party,” and the event featured appetizers and mocktails from different countries like “Saudi Champagne” and “Aqua de Jamaica.” ICIC co-president Bryan Wood, a senior international student from Ghana, said that the purpose of Inter-Fashional Night is to bridge the gap between international and domestic students. According to the college’s 2021-2022 Facts in Brief, there were 127 international students enrolled at Ithaca College in Fall 2021.

Student models wore clothing that represented their home countries and walked down the runway to a chosen song from their country. A diverse collection of fashion was showcased throughout the night, incorporating a wide range of different styles, colors and textures from all around the world. Some student models wore traditional clothing from their culture while others took a modern approach to their outfits, like Ioanna Vargianiti, an international student from Greece, who wore a flowy orange patterned sundress from her favorite Greek clothing brand. After walking the runway, the emcees asked each model to describe their clothing and to share a “fun fact” about their country. Multiple countries across several continents were represented by student models in the show, including India, Brazil, Greece and Nigeria.

Freshman Surya Sharma modeled in the show for the first time this year. Sharma said she represented her home country of India by wearing a churidar, a traditional dress worn on special occasions. Sharma’s churidar was navy blue with white flowered detailing down the front and sleeves of the dress. She said that her favorite part of the night was seeing people represent their countries and becoming aware of different cultures.

“Honestly, it’s just a reminder that even when you’re thousands of miles away from your home, you feel connected to different kinds of people,” Sharma said, “It’s the heart that keeps you united, not the barriers like language, flag, countries, and stuff like that.”

The crowd was lively and full of energy, reacting to performances from Teszia Belly Dance, a belly dance troupe at Cornell University, and IC Pulse, an Ithaca College hip-hop dance team. The event included engaging activities that kept the audience’s minds and bodies active, from an intense round of trivia to a dance battle. Members of the audience competed to win prizes in a game of trivia, testing their knowledge of national flags and world geography. Several students participated in a dance-off as audience members cheered in support of their favorite dancer.

The show’s opening performance was from freshman Anna Ferronato Pimentel who played guitar and sang three songs in Portuguese. Ferronato Pimentel, an international student from Brazil and events manager on the ICIC executive board, said that she loved performing at the event because it had been a long time since she’d had the opportunity to perform a song in Portuguese. Ferronato Pimentel said that she performed four songs which encompassed a wide range of musical styles popular in Brazil, the songs included “Girl from Ipanema” by Antônio Carlos Jobim and “Só os loucos sabem” or in English, “Only Crazy People Know,” by Charlie Brown Jr.

“Personally, [the event] just means getting to express myself and seeing other people express themselves in an extremely genuine way that I don’t get to see on a day to day basis, because at least for me personally, sometimes I find myself kind of suppressing parts of my culture, simply because I am in the US,” Ferronato Pimentel said. “So these events are important for me to remind myself and for me to see other people reminding themselves that their culture is actually very, very valued, regardless of where they are.”

While the event is hosted by ICIC, the event drew a crowd of both international and domestic students across the campus community.

Sophomore Jae Williams said that he was drawn to Inter-Fashional Night because of his experience performing with his dance team, Island Fusion, at ICIC’s One World Concert event last semester.

“I thought [the event] was a really good representation of all the countries around the world,” Williams said, “The clothing was really expressive and bright and I liked all the different incorporations of dance that they had, the hip-hop and the belly-dancers, that was really good to see.”

Freshman Motheo Mawela said that he attended the event to support his friends who were walking as models and performing as part of the IC Pulse dance group.

“It was fun, I really enjoyed it. There was a lot that I saw that I wouldn’t see anywhere else,” Mawela said, “People had a lot of fun and always seeing that happen is amazing.”

This year was the first return of Inter-Fashional Night to campus since before the pandemic in March 2020. Wood said that COVID-19 regulations, such as not being able to serve food from outside vendors, created challenges with planning events for the past two years.

“I just felt like I never expected to see this again,” Wood said, “Honestly, it was so surreal. There were lots of emotions going on.”

Wood said that seeing the event come back to life reminded him how the International Club had been there as a community and safe-space for him throughout his four years at Ithaca College.

“The International Club was one of my havens when I came as an international student, because I struggled so much to assimilate into the US culture … I couldn’t just shut down my culture and just be this new other person,” Wood said, “So the international club was my safe haven, a place where I could always be myself because everyone else embraced those differences and that’s how we became a really close community.”

Wood said that many of the ICIC executive board members will be graduating this year, so he is interested to see how the new board will continue the club’s initiatives next semester.