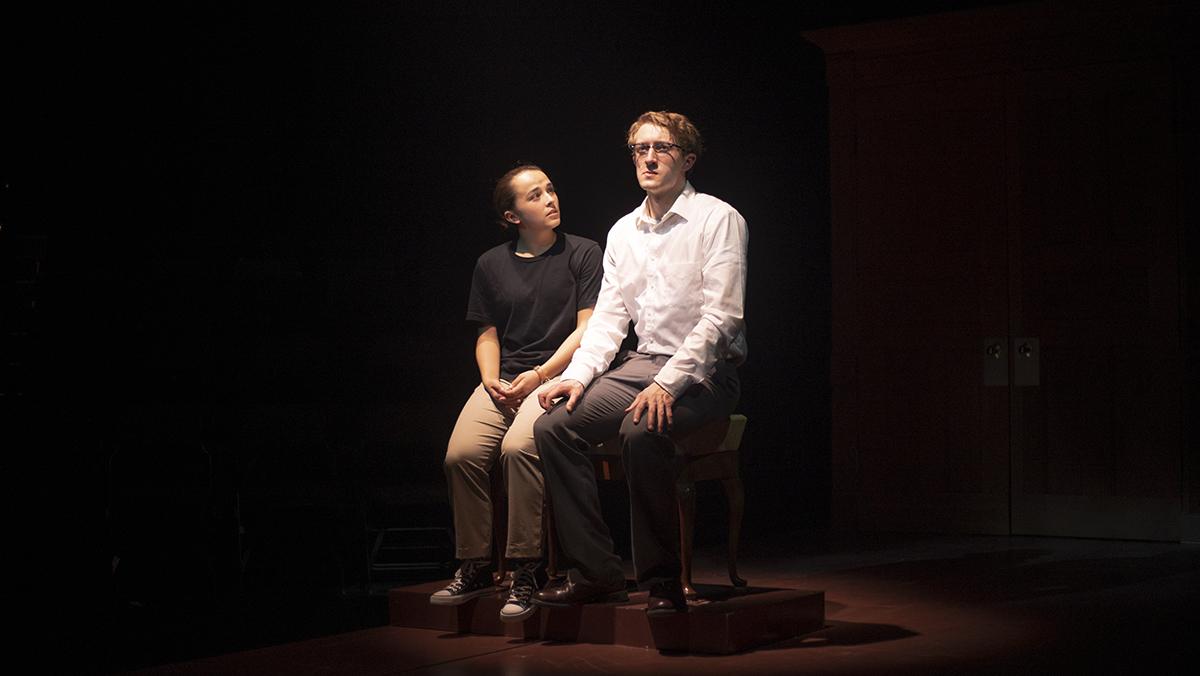 Kevin Yu/The Ithacan
After 11 of the show's cast members were infected with COVID-19, the on-campus production of "Fun Home" worked hard to perform one last show.
By Jadyn Davis — Jadyn Davis
Published: April 21, 2022

After COVID-19 had made the majority of its cast unavailable, the “Fun Home” cast members weren’t sure they would be able to live out their performances to the fullest after the cancellation of their second-to-last show. After a brutal week of revisions, students made sure the show could go on, presenting the campus community with an entirely rebuilt showing of “Fun Home.”

After dealing with multiple COVID-19 cases throughout the week, the Ithaca College Department of Theatre Arts’ production of the musical “Fun Home” put on one final performance, following the five performances the cast was able to perform, after a last minute change in cast. On April 13, the Ithaca College Theatre announced that its performance of the musical “Fun Home,” scheduled for April 14, was canceled after 11 cast members had tested positive for COVID-19 earlier that week. The Ithaca College Theatre’s box office reopened for the semester March 21, with tickets for “We Wear the Sea like a Coat,” “Red Bike” and “Fun Home.” The last show of the season, “One-Act Play Festival” is scheduled to begin April 25.

Based on the graphic novel of the same name, “Fun Home” is a five-time Tony award-winning musical written by Alison Bechdel. “Fun Home” dives into Bechdel’s past to tell the story of how her father’s temperament and secrets defined her family and her life. By moving between past and present, Bechdel relives her childhood playing at the family’s Bechdel Funeral Home. Throughout the play, she begins to  understand her own sexuality, and the looming, unanswerable questions about her father’s hidden desires.

Aimee Rials, the show’s choreographer, said in an IC News story that the musical’s themes have made working on “Fun Home” a personal and rewarding experience.

“As a queer choreographer, it is rare to have the opportunity to work on a musical that’s focused on LGBTQIA+ stories,” Rials said in the story. “It makes working on this production a very special process for me. The level of creative energy, collaboration, and talent in all areas has been a tremendous experience.”

Ticket holders were made known of the cancellations via an email sent out by Department of Theatre Arts instructor Ryan Dickson on April 13. Ticket holders could have their tickets refunded or count them as credit toward a ticket for a future show.

Sophomore musical theatre major Regan White was cast as the female cover for Medium Alison and had to step in at the last minute once it was confirmed that the original Medium Alison tested positive for COVID.

Junior Daniel Hewson, theatre production and design major and technical director for “Fun Home” and oversaw the entire building process for the scenery of the show and the stagehands who worked backstage. Hewson said that while he was initially upset about the COVID-19 cases at first, he was glad the show was able to continue with the help of the Department of Theatre Arts, which had a professional plan for addressing the safety of the cast while continuing to put on a show.

“We have amazing faculty and staff that are working professionals, under their direction we followed the same protocols as most Broadway shows,” Hewson said. “As all of our shows do, we had swing performers that rehearse all or most parts of the show in order to step into a roll in a moment’s notice.”

Even though New York City has lifted the vaccination and mask mandate for indoor gatherings and events, the owners of all 41 Broadway theaters in New York City will continue to require vaccinations for audience members, as well as performers, backstage crew and theater staff for all performances through April 30th 2022.

Ithaca College students are required to be fully vaccinated against COVID-19 for the 2021–22 academic year, but the college did allow for religious and health-related exceptions. Over 99% of the student body is vaccinated.

Former New York Gov. Andrew Cuomo announced the shutdown of Broadway at a news conference March 12, 2020. From then, the entire theater industry, like many other fields at the time, would come to a halt as COVID-19 infections continued to spread. The theater shutdown would last until vaccines started to become readily available. Many Broadway shows have begun to reopen, but understudies and swings have had to step into roles at a higher level as a result of contagious variants.

Hewson said that the issues “Fun Home” are facing have been commonplace in the entertainment industry since the pandemic and that the college’s theater department tackled the challenge posed by COVID-19 professionally.

“Right now, as an industry, we heavily rely on the incredible skill and dedication of our swing performers and technicians, and Ithaca is part of that,” Hewson said. “There were numerous actors that took on new roles, our costumes and wardrobe team worked swiftly to fit and alter all of their clothes, we had other students and area heads step into run crew positions, and a courageous director, Gavin Mayer, and production associate, Amanda Spooner, leading us through the fog.”

Back in November 2021, the cast of the college’s production of “Rent” also experienced a number of COVID-19 cases during production, and the show was also canceled as a result. Like “Fun Home,” ticket refunds were available for anyone who purchased tickets prior.

Hewson said that controlling COVID-19 cases has been an issue that many theaters are facing across the country. In addition, he said the college’s decision to reduce its COVID-19 precautions early, such as removing mask mandates and health badges, may have led to the cases among the cast members.

“I was upset when I first heard about the COVID cases that popped up within the cast,” Hewson said. “I feel as though the college absolved itself of precautionary responsibility too early, leaving its students vulnerable. To assume there are ways to prevent this in the future is unrealistic.”

The next upcoming Ithaca College Theatre production, a collection of three short plays titled “One Act Play Festival,” is scheduled to begin as planned April 25.

Despite drawbacks, Hewson believes that every show the theater puts on is a wonderful experience and that the endless hard work the cast and crew put in to make the show happen all became worth it at the sight of an excited and engaged crowd.