ICTV show invites students to try their hands at animation 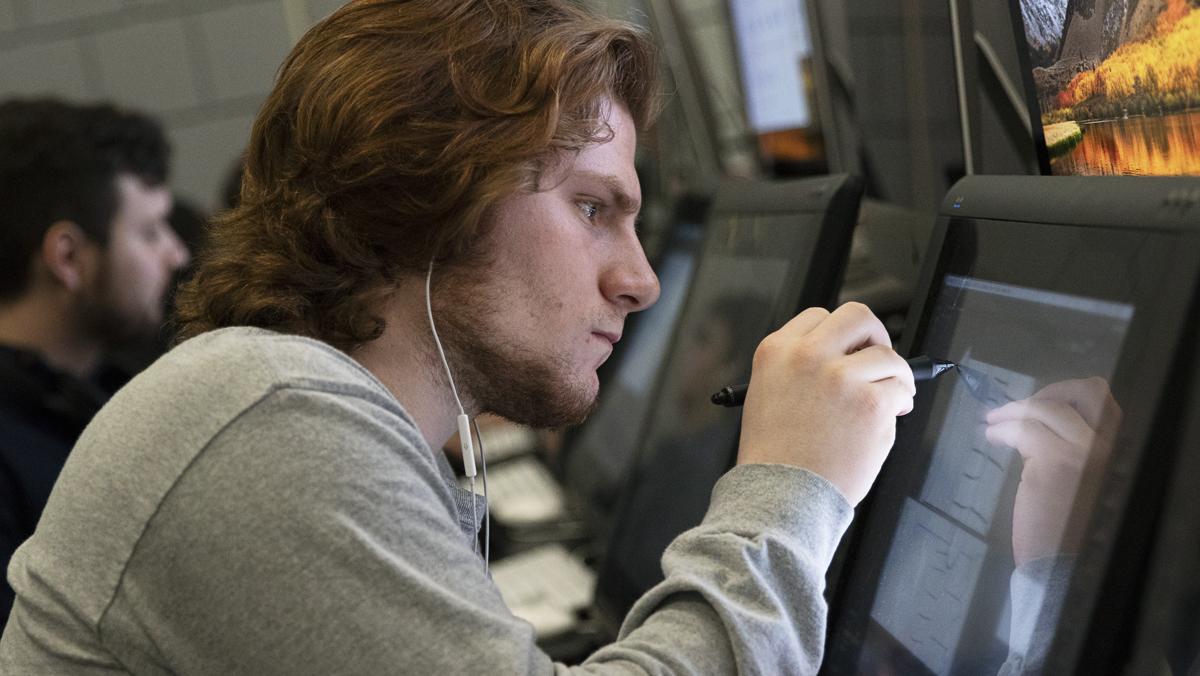 Kristen Harrison/The Ithacan
Freshman Bryan Smith is an animator for “Loose Leaf.” The creators of the show said they wanted to provide opportunities for students without previous experience to learn simple animation techniques.
By Hannah Fitzpatrick — Staff Writer
Published: April 15, 2019

As the establishing shot fades in, Max, a high school junior, is doodling in a page of her notebook, complete with the face of President Abraham Lincoln pasted in the corner. While her math teacher rambles on about algorithmic differentials, she falls asleep and wakes up in a strange, new world — a world that also happens to be inside her notebook.

This all occurs in the first 60 seconds of the pilot episode of “Looseleaf,” an animated ICTV show that premiered its first season December 2018. The show focuses on a high school student, Max, who is transported into her doodles in her five-subject notebook and must travel through her book in order to find a way out. The remaining episodes of the first season of Looseleaf will premiere May 2019 on ICTV’s website.

One of the original creators of “Looseleaf” is junior television-radio major Kyle Lauerman. Though “Looseleaf” was not ICTV’s first attempt at creating an animated TV show, Lauerman said that his experience as an animator on the former ICTV special “Power Down” inspired him to make this show so he can improve his animation skills.

“I met another animator when I was working on ‘Power Down,’ and she suggested that we should make an animated show and that we could make it better now that we had one show under our belt,” Lauerman said. “I thought that was such a great idea, and we immediately started working on what is now Looseleaf.”

One of the first people that Lauerman recruited to work for “Looseleaf” was senior Valerie DiGloria. As a writing for film, TV and emerging media major and writer for “Looseleaf,” DiGloria saw the show as the perfect opportunity to combine her love of writing stories with an interactive medium.

“Once I joined, I was more interested in making a really fun show that uses animation as almost like a tool for storytelling rather than just it being animated,” DiGloria said. “So that’s where a lot of the concept, I think, came from.”

Producers, writers and animators of the show meet every week — sometimes multiple times in a week — on the first floor of the Roy H. Park Hall, where they are currently finishing the next few episodes of this season of “Looseleaf.” They also hold animation sessions where students from any major with any range of experience in animation can come into the studio, learn how to animate and work on scenes of “Looseleaf” under the guidance of the show’s producers.

Through the Park School’s master control, the producers rent out different stations within Park 168. These stations have large tablets and digital touch pens that are commonly used by professionals to animate. Once the animators come in for sessions, the producers give them shots and help them set up the scene, incorporate audio and storyboard visuals into it and animate on top of the drawings through Adobe Animate, which allows users to select elements of pictures and assign movements to them. Animators for “Looseleaf” use character files the show’s creators pre-saved in the tablets’ hard drives.

Lauerman said that by making these animation sessions more hands-on and interactive, he hopes to show that animation is not just for those who are artistically skilled.

“We try to make it that you don’t have to be a good artist or a good animator or have any experience to work on the show,” Lauerman said. “To keep the visual unity of the show, the initial team, including myself, developed all the characters in pre-saved files, so you don’t have to worry about drawing it or making it look consistent the whole time.”

Freshman Bryan Smith joined “Looseleaf” as an editor during Fall 2018, but he decided to try animating for the show in Spring 2019. He said that though the experience was difficult at first, the guidance he received from producers like Lauerman allowed him to get the hang of this new media.

“A lot of it is being creative and sort of finding creative ways to make the animation do what you want it to do,” Smith said. “What’s great about Looseleaf is that as great as it looks as a final product, it really is not too difficult to learn to animate.”

Along with the hope of being renewed for a second season, Lauerman anticipates that “Looseleaf” can leave a legacy behind that will allow current and future students to create future animated shows for ICTV.