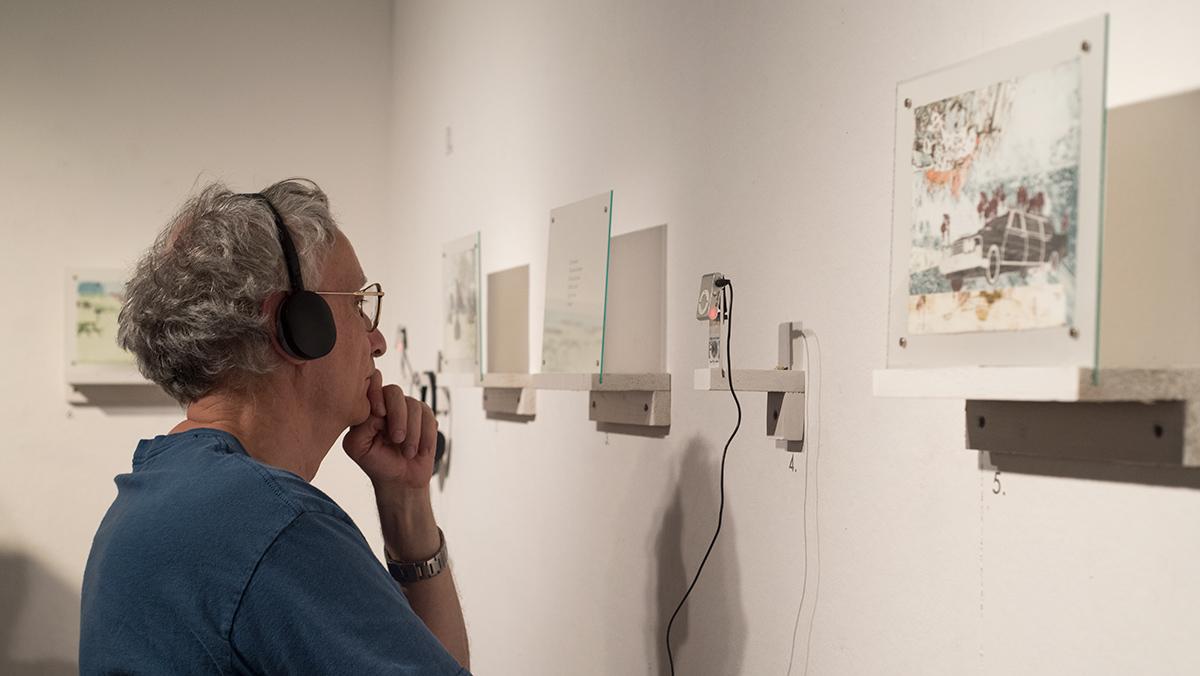 Jade Cardichon/The Ithacan
A local Ithaca resident listens to musician Billy Coté’s musical contribution to “36 Transitions,” which is the new exhibition at the Ink Shop in downtown Ithaca and will remain open until Oct. 29.
By Olivia Riggio — Staff Writer
Published: October 19, 2016

The small room above the Community School of Music and Arts quickly became crowded as the sun went down. Ithaca locals, many of them artists, came in and out throughout the evening admiring prints, reading poetry and listening to music through headphones attached to the stark white walls.
The Ink Shop hosted a reception for the opening night of “36 Transitions,” on Oct. 7. The exhibit is a multimedia installation that features work from electronic and instrumental musician Billy Coté; novelist and poet Jon Frankel; and printmaker and Ink Shop director Craig Mains. It will be open until Oct. 29.

The three Ithaca-based artists collaborated to create six groups of six linked pieces of musical, poetic and visual art. Frankel said all of the pieces in the exhibition relate to the theme of an apocalyptic underworld, or a “town underground” that may or may not reside within ourselves.

Mains said he came up with the idea for “36 Transitions,” inspired by the game “telephone” and its lesser-known visual equivalent, “exquisite corpse,” which involves players’ drawing images on a piece of paper and passing it along for others to add to. The method in which the artists shared their pieces was similar to these games in that one artist would begin each sequence, the next artist would create a piece based on the first work, and the third artist would create a piece based on the second work. The artists could interpret the other pieces in ways that could add to or alter their initial ideas.

“One person says something into someone’s ear, and that person passes it on, and by the time you get to the end of the line, it’s changed. Or, perhaps it hasn’t changed,” he said. “I love the game, so this is kind of a version of that.”

The artists met in Olin Library at Cornell University, where they all work. They came up with the idea for the project in February 2015 and began submitting their work to one another in May 2015. They set up a Dropbox to share their pieces with one another, and they could not see the other pieces until the full sequence was finished.

For example, if Mains began a sequence by creating a print, Frankel would then write a poem based on Mains’ print, and Coté would compose a song that reacted to Frankel’s poem. The sequence would repeat so the group would have six pieces of art in it. Frankel said the results were rewarding.

“I was really surprised with just how spontaneous it was,” he said. “It was really improvisational.”

Frankel also said each artist could choose to repeat, interpret or respond to the piece that he was working off, depending on its nature.

Coté said the first piece in the series elicited profound creative responses from him due to its frank and provocative nature. It begins with Frankel’s poem, which reads, “One god/ Is one god/ Too many.” He said the controversial message, printed modestly yet unabashedly in plain black against a stark white canvas, serves as an existentially challenging provocation.

Coté created his music using the Pro Tools application, where he mixed his guitar recordings with software-generated synths. He said his musical piece based on Frankel’s poem was his favorite to work on.

“I know it’s sort of nihilistic, and it’s sort of cynical, but it’s a strong statement, and it immediately opened up a lot of conversation between us artistically,” he said. “Because of that, I made a piece that was sort of dark and a little chaotic. Because a life without God — what does that mean? Does that mean chaos? That was the question that I was asking musically.”

Mains’ print was an interpretation of Coté’s eerie and brooding ambient song. It features what appears to be a dilapidated amusement park in muted shades of gray and copper. Roller coaster ruins appear in the background while a shadowy silhouette sits nonchalantly on a broken kiddie ride in the foreground.

Mains said each medium used in the exhibition was important to the creation of an engaging multimedia experience.

“The visual work draws you in,” he said. “But with the music, you have to stay there. People here are taking a lot more time looking at pieces, and I can thank the music and the writing for that.”
The artists also installed the exhibit themselves, purchasing and attaching MP3 players and headphones to the walls along with the poetry and prints, which they mounted in minimalistic glass. Attendees can wander around the room and take the art in at their own pace.

Ithaca resident Chris Kelly, a graphic designer for Cornell who used to teach Photoshop workshops at the Ink Shop, said he thought the Ink Shop’s collaborative environment provided great opportunities for local artists to work together and gain notoriety in the community.
“I think [The Ink Shop] adds a richness to the community,” he said. “They have several unique offerings here. There’s a lot people can learn.”