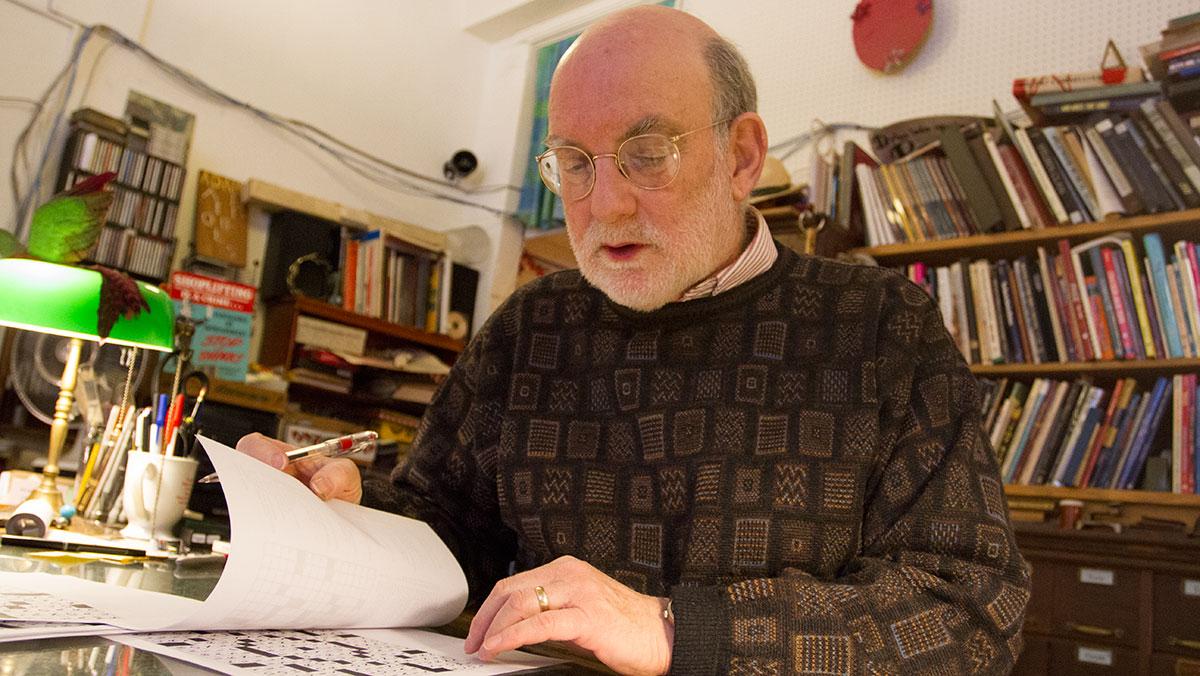 Inside Pastimes Antiques, an antique shop located within the Dewitt Mall, knickknacks fill every spot in the room. In one section, jewelry boxes are filled with wristwatches, bracelets and rings. In another, Ithaca-themed cards and advertisements line a small bookshelf. And to the left of the cashier counter hangs a handmade sketch. At center, a man wears a cone-shaped wizard hat with a peculiar design: blank crossword puzzles set on a charcoal background. He holds a magic wand, crafting words to create crossword puzzle masterpieces.

This man is Pastimes’ owner and crossword puzzle constructor, Adam Perl. Perl, a 1967 Cornell University graduate, opened Pastimes in 1979. On the side, however, Perl constructs hundreds of crossword puzzles for countless occasions, including family gatherings, Bat Mitzvahs, anniversaries, holidays and retirement celebrations.

Perl said he gave his first-ever puzzle to his mother for her 70th birthday. With well-received critique from his family members, Perl then pursued his new passion.

In 1998, Perl wanted to try publishing a crossword puzzle for The New York Times. He said he called his friend Stephanie Vaughn, who had a piece of her work, “Sweet Talk,” published in the newspaper some years before.

“I asked for the crossword editor, and I was talking to Will Shortz within seconds,” Perl said. “And I was tongue-tied! He said, ‘Will Shortz,’ and I was like, ‘uh … uh. I’m a crossword puzzle maker.“

Since then, Perl has published 25 puzzles in The New York Times. Perl said his 26th puzzle is currently in the pipeline.

Crawford first met Perl at the now-closed Cabbagetown Cafe in 1979. As their friendship grew throughout the years, Crawford watched Perl throughout his crossword construction journey. Crawford says Perl is a genuine gift to the Town and City of Ithaca.

“A lot of college towns will have a handful of people who stayed, and they just continue to grace their community with their talents,” Crawford said. “He’s a nice mixture of being creative and seriously community oriented. You can’t have enough of those people around.”

Perl gives back to the community through an annual crossword puzzle tournament. March 7 will be the Third Annual Finger Lakes Crossword Competition. All proceeds go toward Tompkins Learning Partners, which teaches adults and incarcerated youths English, math and computer literacy. Sharon Yntema, Perl’s colleague, participates in this event each year. She said she loves to watch everyone work together for such a charitable event.

“Adam creates three levels of puzzles for the event, and it’s great to be in a roomful of fellow solvers,” Yntema said. “Adam has a quirky sense of humor in his puzzles, so they are always a treat.”

Perl said he takes pride in this event, as it lets him put his puzzle-making to good use.

“It enabled me to turn my hobby and joy of making crosswords into an actual charity fundraiser that raises money for a wonderful cause,” Perl said.

Perl said he also gets a kick out of the event as it unfolds.

“This is a lot of fun for me,” Perl said. “Making the puzzles, watching people do them, hearing the groans, the sighs and the ‘ah-ha’s.”

Ultimately, Perl said he believes in pursuing dreams. Perl said his parents never pushed him to become a doctor or lawyer. He said they encouraged him to do what he loves.

“I started getting my Social Security four years ago already and I could retire,” Perl said. “But I don’t want to. There’s nothing I want to retire to. I’m doing what I want to do now. Follow your passion, do what you love and you’ll be happy.”