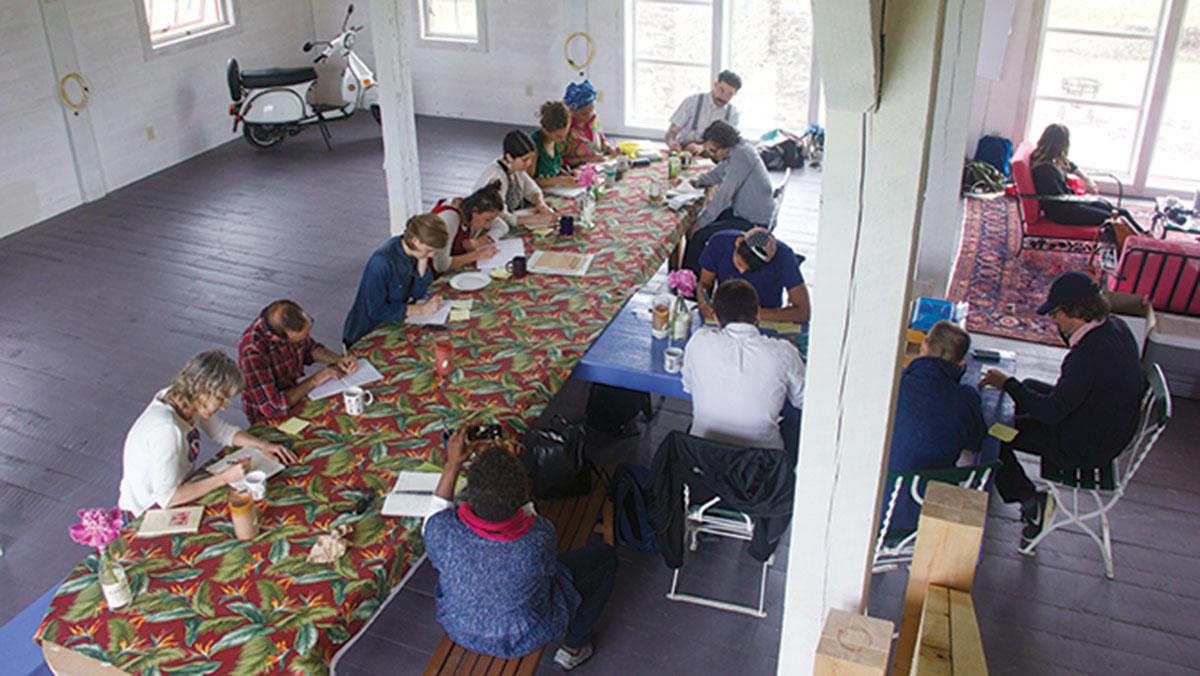 Poetry, prose, drawing, collages and other types of visual art come together in a yearly, experiential program called Image Text Ithaca. The program is an Ithaca College workshop that brings together six nationally and internationally recognized artists, writers, publishers and editors, along with seven early career artists for a collaboration of both photography and writing.

The workshop offers an undergraduate summer course through the college, held from June 29 to July 11, in image-text studies. The application deadline for this course is March 1. The course is implemented so that students can prepare for the following workshop, which this year will occur July 5–8 at the program’s workspace — a restored barn near Robert H. Treman State Park in Ithaca. The following Symposium, which will present curated art and lectures, will take place from July 9–11 at the college and is open to the public upon registration.

The main goal of Image Text Ithaca is to give both international and local artists a chance to exchange and develop ideas with one another through a creative and learning workshop, Catherine Taylor, associate professor in the Department of Writing, said. Image Text Ithaca was organized by Nicholas Muellner, an associate professor in the Department of Media Arts, Sciences and Studies, and Taylor. Both of the professors have experience in text-based visual art. In 2012, Taylor published a book with a mix of text and photography. Muellner has also published mixes of his writings and photography. Muellner and Taylor wanted to begin the workshop because they thought more conversation needed to be started about image-text creations, Taylor said.

For the Image Text Workshop, participants arrive with the materials they choose to use. The artists may bring in projects they are currently working on, materials they have found or unfinished parts of their older works. On the first day of the workshop, each artist gives a presentation of their material in order to show others what they will be working with and give other artists an idea of their creative procedure. For the next few days of the workshop, artists will work individually or in small groups, but as a whole will figure out a way to craft new creations. Once the year’s program concludes, a book will be composed of the fruits of the artists’ labor, which will be published for online and print via the Image Text Ithaca’s own press, Taylor said.

“We’re hoping to start a press called Image Text Ithaca Press, for just image text books by both established international artists and also by students for both print and online,” Taylor said. “This is just another way to start to bridge and make connections between photographers and writers, but also between students and artists and writers.”

“The central organizing structure [of Image Text Ithaca] is to launch a graduate program, which we’re hoping to start in 2016,” Muellner said. “Our goal is to integrate those two fields in a graduate study program so that they could be in part of the same conversation, which doesn’t mean that everyone has to be making work all the time that integrates both things, but that they operate and work together and share a common language.”

Ultimately, Taylor said that the fusion of visuals and text is something students will appreciate.

“Students seem really interested in it,” Taylor said. “I think because we live in such a visual culture and people are used to incorporating visuals and text online, the idea of bringing that into books is interesting to photography students and writers as well.”